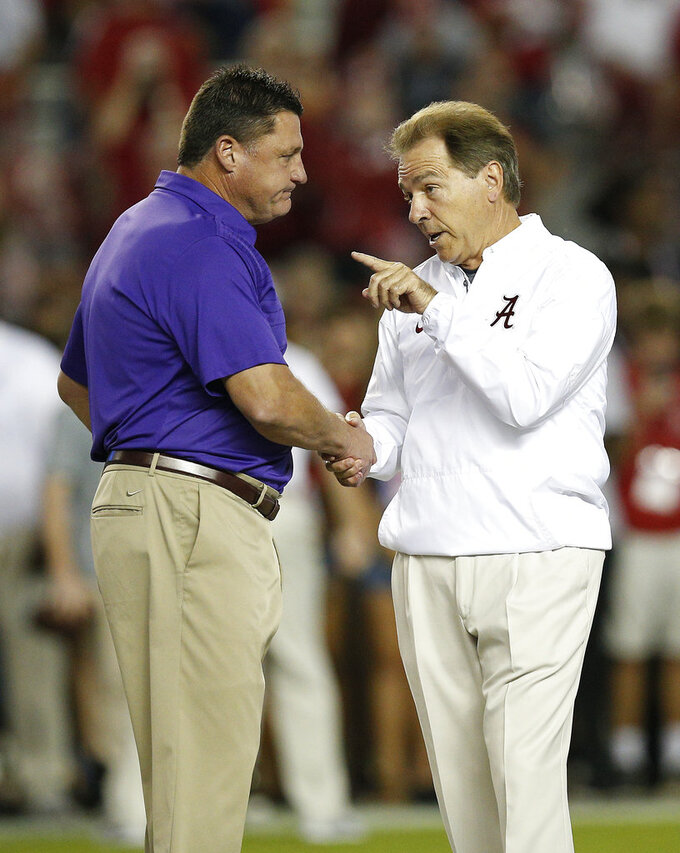 FILE - In this Nov. 4, 2017, file photo, Alabama head coach Nick Saban, right, and LSU head coach Ed Orgeron, left, meet in the center of the field before an NCAA college football game, in Tuscaloosa, Ala. The ability of LSU's Ed Orgeron to exceed expectations this season has the Cajun coach on the brink of considerably augmenting his legacy in his native state _ particularly if he can end a streak of futility against No. 1 Alabama. (AP Photo/Brynn Anderson, File)

BATON ROUGE, La. (AP) — Cornelia "Coco" Orgeron, the mother of LSU coach Ed Orgeron, describes her son as someone who lives to bring joy to others and rarely requests anything for himself, "except maybe a gumbo."

Her assessment is routinely echoed across the Cajun enclaves of south Louisiana — particularly around Bayou Lafourche, where the Tigers' coach grew up and is known by the nickname, "Bebe."

If "Bebe" can beat 'Bama, he might get all the gumbo he could eat without ever asking for it again.

The fourth-ranked Tigers will try to snap a seven-game losing streak in the series when the No. 1, unbeaten Crimson Tide visit Death Valley on Saturday night.

Now in his second full season, Orgeron was a popular figure in his home state even before he was elevated from assistant to head coach at LSU during the 2016 season. The burly Cajun with the raspy voice is only the third Louisiana native to serve as LSU's head coach since the Tigers joined the Southeastern Conference in 1933.

Orgeron, 57, grew up watching LSU football with family and friends on fall Saturday nights. He says he has a deeply personal connection to his current job, and few in Louisiana doubt him.

The main question when he was hired was whether he was qualified for one of the most plum coaching jobs in college football.

While Orgeron had enjoyed relative success as an interim head coach at both Southern California and LSU, and has long been credited for his recruiting prowess, he went 10-25 in his only other SEC head coaching job at Mississippi from 2005 to 2007.

LSU practices at a facility named for Arkansas native Charles McClendon, who piled up an LSU-record 137 coaching victories when Orgeron was young.

But Orgeron asserted that he learned from his Ole Miss misery a decade ago, and recent evidence backs him up. He has gone 22-7 at LSU. He also has, by most accounts, surrounded himself with a strong staff of assistants and analysts — and trusted them to do their jobs.

"I've never experienced him micromanaging," said former LSU offensive lineman Will Clapp, now a rookie with the New Orleans Saints. "He's put together a very good staff and lets those guys do what they're good at."

Orgeron said his priority was "to have the best staff in America," and he routinely credits Aranda, offensive coordinator Steve Ensminger, special teams coach Greg McMahon and other assistants for recent successes.

After last season, Orgeron doubled the number of analysts assisting with scouting reports on opponents from five to 10 — an increase he requested from athletic director Joe Alleva after discovering the extent to which LSU was behind Alabama in that department.

This season, "those guys have brought a tremendous advantage to us," Orgeron said, noting that increased use of analytics led to LSU converting four fourth-and-short plays during a victory over Georgia .

Meanwhile, Orgeron's roots in a state known for its distinctive cuisine have helped him connect with players from Louisiana, long among the nation's more fertile recruiting grounds. Although the cafeteria where football players eat has a menu largely conforming to modern nutritional standards, Orgeron insists that some Louisiana staples such as his favored gumbo, etouffee and friend shrimp also are served.

Running back Nick Brossette, who is from Baton Rouge, said it tastes authentic, "like a lot of seasoning in it and everything else."

Coco Orgeron and her sister, Mary Ann Guidry, have brought players and staff desserts, including Tarte a la Bouille, a custard pie popular in Cajun country.

"Baked chicken is good, but come on, a little boudin or gumbo, fricassee, jambalaya — that helps a little bit to the soul," Coco Orgeron said.

Odds makers have listed LSU as two-touchdown underdogs. Yet Orgeron's Tigers have exceeded expectations this season, upsetting Miami, Auburn and Georgia to stay in contention for an SEC title and perhaps a College Football Playoff bid — at least for now. Next up is Alabama.

If they can topple the mighty Crimson Tide, the party will be on.

Martin, who helps organize a fundraiser in Lafourche Parish called Coach O Day, said if LSU wins "It's going to be a hell of a celebration down on the bayou. In fact, they may fill the bayou with purple and gold dye."