Morris, defense lead No. 21 NC State past No. 20 Wake Forest 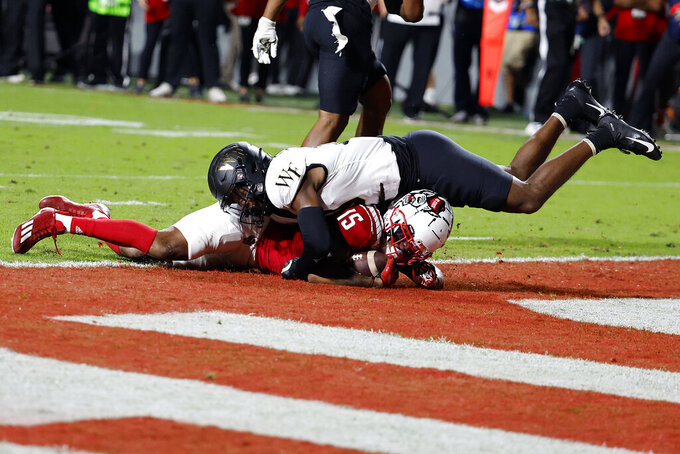 North Carolina State's Keyon Lesane (15) is tackled in the end zone after scoring by Wake Forest's DaShawn Jones, top, during the first half of an NCAA college football game in Raleigh, N.C., Saturday, Nov. 5, 2022. (AP Photo/Karl B DeBlaker)

RALEIGH, N.C. (AP) — MJ Morris has given No. 21 North Carolina State the spark it needed.

The first-year passer threw for three scores while the Wolfpack's defense thrice picked off Sam Hartman to beat No. 20 Wake Forest 30-21 on Saturday night. He threw for 210 yards in becoming the first true freshman in more than 22 years to start for the Wolfpack (7-2, 3-2 Atlantic Coast Conference), following his three-TD effort in last week's comeback home win against Virginia Tech.

This performance, though, came against a ranked instate foe featuring a veteran star quarterback in Hartman leading a high-scoring offense.

“He's way ahead of where we thought he would be at this point in his career,” Wolfpack coach Dave Doeren said of Morris.

Morris hit Darryl Jones for two of his touchdowns and Keyon Lesane for another to lead the offense. He also directed a key late drive that took four minutes off the clock and set up Christopher Dunn’s 25-yard field goal to make it a two-possession game with 2:54 left. And it was another boost for a team that lost preseason ACC player of the year Devin Leary at quarterback to a season-ending injury less than a month ago.

“That’s one of the things Coach Doeren told me last week: ‘Just bring that juice because the whole team is going to revolve around you,’" Morris said.

Meanwhile, the Wolfpack's veteran defense got after Hartman for four sacks and plenty of pressure up front. The unit also got an early boost by standing up when the Demon Deacons got a first-and-goal at the 1-yard line, forcing three straight negative-yardage plays followed by a missed field goal.

This wasn't the type of performance Dave Clawson wanted from his Demon Deacons (6-3, 2-3), who lost at Louisville last week while committing eight turnovers — six by Hartman in the third quarter alone. Hartman threw for 397 yards and connected with Taylor Morin and A.T. Perry for touchdowns in this one, while Perry had 12 catches for 159 yards.

But the Demon Deacons managed just 17 yards rushing to put everything on Hartman's right arm.

“It's a good football team, it's a tough environment, it's a really good old veteran defense,” Clawson said of the Wolfpack. “They started a freshman quarterback but the rest of that unit is good players. They've got a veteran O-line, they've got veteran offensive skill. He played well, but they didn't ask him to win the game.”

Wake Forest: The Demon Deacons' formula for success under Clawson has been avoiding self-inflicted mistakes. They now have 11 turnovers in two games and had nine penalties for 74 yards in this one.

N.C. State: N.C. State's last two home games had featured comebacks from double-digit deficits after halftime, first from 17-3 down against Florida State and then last week's rally from a 21-3 hole against Virginia Tech. No need this time, not with Morris looking steady and mobile all night while following eventual longtime NFL quarterback Philip Rivers as the program's last true freshman QB starter.

N.C. State is showing the kind of resilience sure to keep the Wolfpack solidly in the AP Top 25, while Wake Forest could tumble slightly after another off-target performance.

Things got testy late, with the teams jawing at each other during and after the game as they left the field. That included Wake Forest defensive back Caelen Carson taking off his helmet while exchanging words with a Wolfpack player, leading Carson to be flagged for unsportsmanlike conduct.

There was also the sight of Wolfpack defensive tackle Cory Durden waving good-bye multiple times to Wake Forest during that exchange and as some players were separated afterward.

The arguing didn't carry into the tunnels or locker rooms. North Carolina State's stadium has separate tunnels for the each team.

“We did some things that I'm not proud of and I'm sure Dave feels the same way about his football team,” Clawson said, adding: “I'm not pointing fingers. I'm responsible for what our guys did and I'm embarrassed by some of the things we did. And we'll address that tomorrow."

Wake Forest: The Demon Deacons host No. 17 North Carolina next Saturday for a second-straight matchup against a ranked instate ACC team.

N.C. State: The Wolfpack's home finale comes next Saturday with a division visit from Boston College.