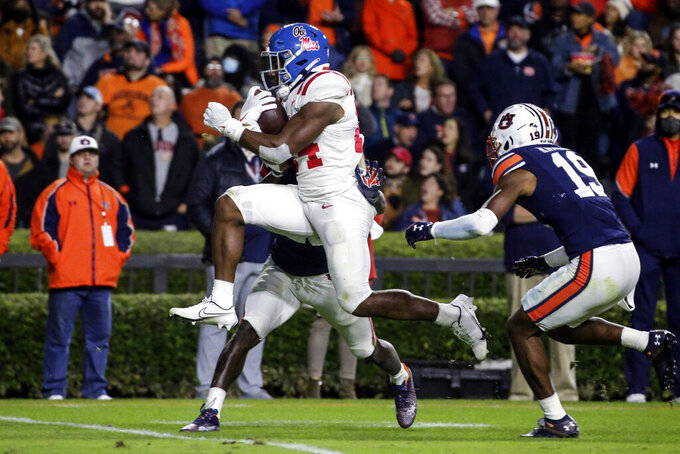 Mississippi running back Snoop Conner (24) carries the ball in for a touchdown against Auburn during the first half of an NCAA college football game Saturday, Oct. 30, 2021 in Auburn, Ala. (AP Photo/Butch Dill)

AUBURN, Ala. (AP) — When Bo Nix got close to the end zone, he mostly found a way to reach it either running or passing in the first half.

Matt Corral, normally quite adept at that himself, and Mississippi couldn't cash in on any chances to muster a comeback after that.

Nix passed for 276 yards and a touchdown and ran for two more scores and No. 18 Auburn's defense made a number of big stops in a 31-20 victory over 10th-ranked Mississippi on Saturday night.

“It was a huge statement game,” Nix said. “Beating a Top 10 team at home, there's just nothing like it.”

The Tigers (6-2, 4-1 Southeastern Conference) remained the top challenger to No. 3 Alabama in the Western Division with Nix winning a quarterback duel with the Heisman candidate Corral.

The Rebels (6-2, 3-2) had their three-game winning streak end after squandering four second-half scoring chances, three with failed fourth down passes inside the 20. Plus Jaylin Simpson intercepted a pass in the end zone — only Corral's second this season — midway through the fourth.

“That’s points. They’re not going to take points on special teams,” Auburn coach Bryan Harsin said. "They’re going to go for it and we get the ball back. You kind of think of that as a turnover.

“Those were critical moments in the game that we were able to win.”

Nix completed 22 of 30 passes and ran for 30 yards. Tank Bigsby ran for 140 yards and a touchdown for the Tigers.

Auburn led 28-17 at halftime and both teams only managed a field goal after that.

“Bo made a lot of plays for them, especially early on,” Ole Miss coach Lane Kiffin said. “I thought our defense after struggling early played especially well, gave us a bunch of chances offensively to win.

“That’s four times in the red zone with no points. That’s going to be hard to win.”

Corral had his 19-game streak with a touchdown pass end with a 21-of-37, 289-yard performance. He did run for a score, returning after getting carted to the locker room with an injury to his left ankle, previously hurt against Tennessee.

“It was the same thing that happened in the Tennessee game,” Corral said. “I couldn’t feel my ankle. I heard a pop, but honest to God, I don’t know what it was. I couldn’t feel it for like five minutes.”

But, he added: “No excuses for not executing.”

Walk-on Jahcour Pearson caught seven passes for 135 yards for the Rebels, who have been short-handed at wide receiver. The Western Kentucky transfer came in with 30 yards this season. Top receiver Dontario Drummond sustained an undisclosed injury in the game and Jonathan Mingo and Braylon Sanders already hurt.

Ole Miss stayed alive late with an Auburn fumble across midfield. But the comeback bid ended on a fourth-and-3 incompletion from the 18 when the Rebels also were flagged for two penalties.

Mississippi: A team that had attempted and converted more fourth down plays than anybody in FBS lost its mojo in key situations. In their two losses, including to Alabama, the Rebels are 3 of 9.

Auburn: Has beaten two straight ranked SEC West teams to remain in control of its own destiny in the division. Nix has been superb against both Arkansas and Ole Miss after getting benched against Georgia State.

“Owen, he's a captain and he just brings the energy,” Simpson said. “He's the heartbeat of the defense and I'm glad to have him out there.”

The Tigers should jump a few spots in the rankings. The Rebels' first visit to the Top 10 since the final poll in 2015 was short-lived.