No. 1 Georgia looks to add SEC title to trophy case vs LSU 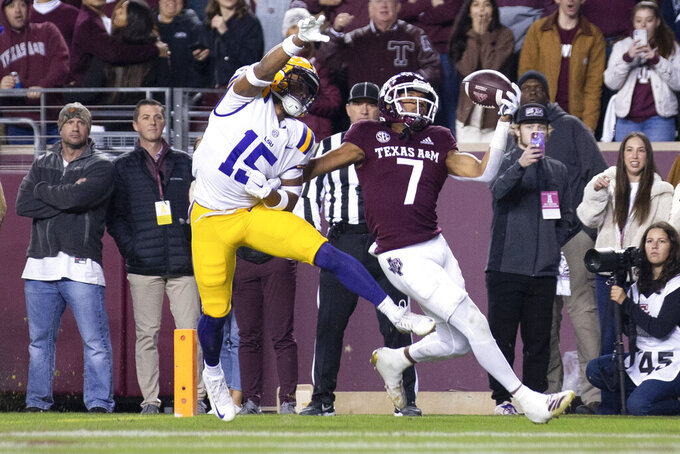 ATLANTA (AP) — The No. 1 Georgia Bulldogs have their eyes on the biggest prize of all.

Yet there's a gnawing desire to add another Southeastern Conference title to the trophy case.

Undefeated Georgia heads into Saturday's SEC championship game against No. 11 LSU having surely done enough to earn a spot in the four-team College Football Playoff, no matter the outcome against the Tigers.

By all indications, this is a rather meaningless affair.

“It’s about that next step and having an opportunity to put a number on the wall that stays there forever,” Smart said. “It’s an SEC championship. You don’t belittle those. Those are hard to come by.”

Georgia may have won the national title a year ago, but Alabama handed the Bulldogs their only loss of the season to claim the SEC championship. In fact, Smart's program has managed just three conference crowns in the last four decades — the most recent coming in 2017.

Even so, there's no denying that LSU (9-3, No. 14 CFP) took a huge amount of luster off this game with its dismal performance a week ago at Texas A&M.

The Tigers had an outside shot to slide into the playoff if they could beat the Aggies — who had lost six straight SEC games and were arguably the most disappointing team in the country — and then knock off Georgia.

Those hopes evaporated with a stunning 38-23 loss in College Station, sending LSU to Atlanta as an 18 1/2-point underdog to a Georgia team that has lost only one game in the last two seasons.

“They took it hard after the game,” said Brian Kelly, the Tigers' first-year coach. "They care. They really want to make sure that something like this doesn’t happen again. We can get beat, but we don’t want to be beat with not bringing our very best. Unfortunately, it’s one of those lessons to be learned in terms of how you need to prepare each and every week.”

Still, this has been a turnaround season for an LSU program that won the national title in 2019 but failed to post a winning record the last two years.

Last weekend's debacle notwithstanding, Kelly has the Tigers heading in the right direction again.

An SEC title would certainly be a most surprising capper to a season that already has exceeded expectations.

“We’re not perfect,” running back Josh Williams said. “We know some games that we just don’t do as well as we expect to do. But that doesn’t change our process and our mindset going into the next week. Just because it doesn’t look good for one game doesn’t mean it can’t look good for the next game.”

LSU quarterback Jayden Daniels has been dealing with an ankle injury that had him using a walking boot early in the week.

But Kelly said Thursday that Daniels is good to go against the Bulldogs.

“He’s had a good week of practice," the coach said. “He’ll play for us on Saturday.”

Georgia's defense was already locked in on facing Daniels rather than backup Garrett Nussmeier.

“That was news to me,” lineman Zion Logue said when asked about Daniels wearing a boot. “We’re really just preparing like he’s going to be there."

There are no questions about Georgia's quarterback situation.

Sixth-year senior Stetson Bennett has turned in another stellar season, giving the former walk-on a chance to close out his career as part of an elite club.

“He’s done what we’ve asked him to do,” Smart said. “He has played some formidable, good opponents, and he’s played really well against those teams. He’s made a couple of decisions I think he would like to have back, but he’s also made some really, really spectacular plays.”

Brock Bowers has been a nightmare for opposing defenses, a burly tight end with receiver's speed.

Bowers has 46 catches for a team-high 645 yards and five touchdowns. He also has been used effectively in the running game, carrying six times for 93 yards — that's 15.5 per rush — and three more TDs.

LSU knows it will have its hands full with Bowers, especially because the Bulldogs have plenty of other weapons that can't be ignored. Nine players in all have double-figure catches.

Kelly credited Georgia offensive coordinator Todd Monken for finding all kinds of ways to get Bowers involved in the offense.

"Everything from handoff sweeps to — I don’t know if he’s thrown the ball yet, but I’m sure he will," the LSU coach said. “He’s just a versatile player. He’s a guy that can break games open.”

This likely will feel like a home game for the Bulldogs, even though Mercedes-Benz Stadium is technically a neutral site.

The 75,000-seat, retractable roof stadium near downtown Atlanta is only about 75 miles (120 kilometers) from Georgia's Athens campus.

The Bulldogs already have played in the stadium once this season, routing Oregon 49-3 in the season-opening Chick-fil-A Kickoff game.

If Georgia knocks off LSU, the Bulldogs surely will be headed for another short trip to Atlanta for the Peach Bowl playoff semifinal.

“It’s not something that I’ve really even thought about," Smart insisted. “Wherever the dust settles, whatever happens happens, and you make the most of it.”

Georgia is 3-6 in the league title game, including last year’s 41-24 loss to Alabama. The Bulldogs won the rematch in the national championship game.