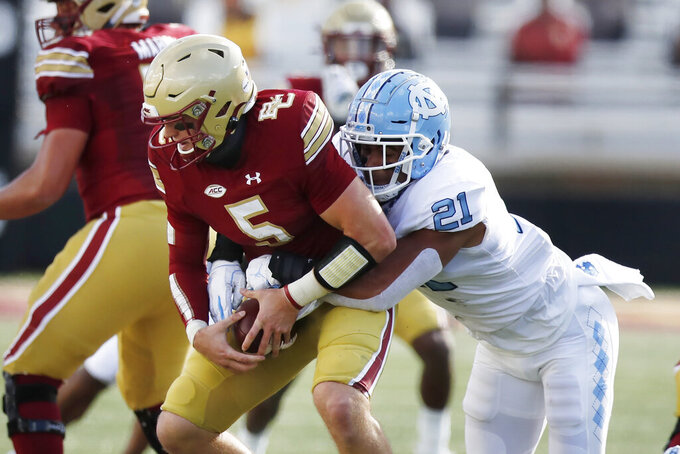 BOSTON (AP) — Sam Howell threw for two touchdowns and Trey Morrison scored after intercepting the potential tying 2-point conversion with 45 seconds left on Saturday to lead No. 12 North Carolina to a 26-22 victory over Boston College.

With the cancellation of one game because of the virus and a scheduled off week leaving North Carolina idle since Sept. 12, the Tar Heels (2-0, 2-0 Atlantic Coast Conference) sent BC (2-1, 1-1) to its first loss under new coach Jeff Hafley.

Howell completed 14 of 26 passes for 225 yards, including a 41-yard score to Javonte Williams that gave Carolina a 21-13 lead with just over a minute left in the first half. Williams ran for 57 yards and caught two passes for 56, and Michael Carter carried 16 times for 121 yards for the Tar Heels.

UNC led 24-16 with just under six minutes left before Phil Jurkovec drove BC into Tar Heels territory and completed three passes in the end zone. The first two were negated by penalties, but a 6-yard pass to C.J. Lewis made it a two-point game with 45 seconds left, with the 2-point conversion to come.

Jurkovec scrambled and threw to the end zone, but Morrison picked him off and ran down the left sideline for the rare defensive 2-point conversion.

The Eagles traded field goals for touchdowns most of the game but still had a chance after forcing a 47-yard field goal attempt that Grayson Atkins missed wide to the left with 5:46 to play. Jurkovec connected on a 10-yard pass to Lewis, who was called for offensive pass interference, and later a 22-yard strike to Long that was negated by a holding call.

It was 14-13 with just over a minute left in the first half when Howell scrambled across the BC logo at midfield and — straddling the line of scrimmage — found Williams in the middle. Catching the ball at about the 25, he eluded two tacklers on his way to the end zone. (A replay confirmed Howell’s back leg was behind the line when he threw the ball.)

Again, BC drove deep into Carolina territory, with Jurkovec completing five straight passes at one point. But the Eagles came away with just Aaron Boumerhi's field goal, a 30-yarder that was his third of the game.

Falling behind after answering a pair of touchdowns with two field goals, the Eagles got a break when Jahmin Muse deflected Howell’s pass into the air and Brandon Sebastian fielded it to give BC the ball at the Carolina 5. Three plays later, Jurkovec hit David Bailey for a score that made it 14-13.

The Tar Heels should remain ranked for another week.

North Carolina: The Tar Heels improved to 6-2 vs. BC, with a 4-0 record in the ACC, but Hall of Fame coach Mack Brown had never faced the Eagles.

Boston College: BC was going for its first 3-0 start since 2007 and just its second in a half century. Instead, Hafley will try to regroup before next week’s game against Pittsburgh.

North Carolina: After having two weeks off because of the cancellation of the Charlotte game, the Tar Heels return home to play Virginia Tech — the first of six straight games until Thanksgiving.

Boston College: Next week’s game is against a Panthers team that will likely drop out of the Top 25 after losing 30-29 to North Carolina State on Saturday.