No. 12 Oregon's defense off to historic start 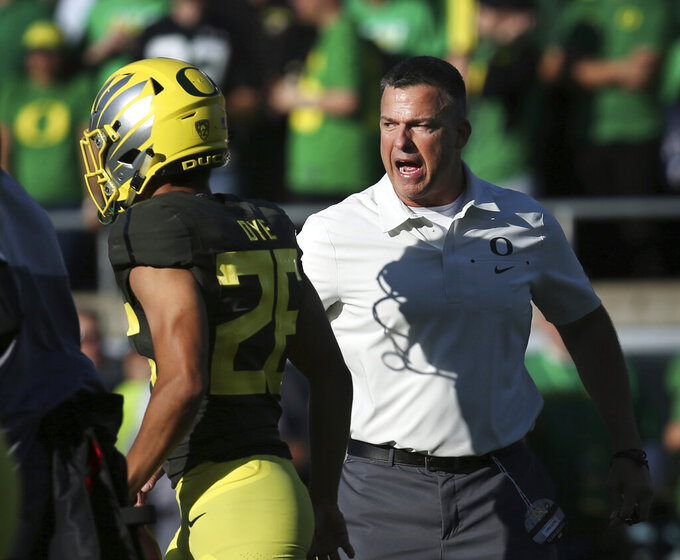 EUGENE, Ore. (AP) — Running back Cyrus Habibi-Likio says Oregon's defense in practice is as good as — or even better than — some of the teams the Ducks have faced so far.

"It's like game day, every day out there in practice. Game day," he said.

Oregon's D has been revived under new defensive coordinator Andy Avalos, and it is having a historic run for the No. 12 Ducks.

After dropping its season opener against Auburn, Oregon has reeled off five straight wins. The Ducks now sit atop the Pac-12's North Division at 3-0, their best start in conference play since 2013.

The stats are impressive.

Oregon is ranked third nationally in allowing an average of just 8.7 points per game. Over the five-game winning streak, the Ducks have given up just one touchdown while outscoring opponents 195-25. They've kept all five of those opponents to single digits in scoring for the first time since 1958.

As for Pac-12 play, Oregon has held its first three conference opponents to under 10 points for the first time since 1933.

The Ducks' D has stopped opponents from scoring a touchdown on nine straight trips into the red zone. Additionally, Oregon has allowed just one TD over its opponents' last 63 drives, forcing 21 three-and-outs.

"If you look back at us at during spring ball, you saw a complete transformation of the defense, the way it's taught, the way it's coached, the scheme itself. The amount of pride taken by the players is still the most impressive thing. These guys attack it, and I get to watch it every single day. So, I'm certainly excited for what is to come," Oregon coach Mario Cristobal said.

The defense will face a new challenge on Saturday when the Ducks visit No. 25 Washington (5-2, 2-2). Huskies coach Chris Petersen knows Avalos well: he was on Petersen's staff at Boise State.

"He's one of those guys that has stayed on a constant state of improvement and figuring out how to do it a little bit better but stayed true to your roots and what you believe in fundamentally and philosophically and all those things. Those guys play at a high level. There are not assignment errors going on out there. You're not going to get anything easy on them," Petersen said.

Avalos is Oregon's third defensive coordinator in four seasons. He was hired to replace Jim Leavitt, who parted ways with Oregon after two years after never seeming to mesh with the Ducks. Avalos spent seven seasons at Boise State before arriving in Eugene. And so far, it seems like it's been a good fit.

During Oregon's 45-3 victory at home over Colorado last Friday, safety Verone McKinley III had a pair of interceptions, becoming just the second freshman in the nation with two. He also had a career-high five tackles and was named the Pac-12's Player of the Week.

"The man's a genius," McKinley said about Avalos. "Ever since he first got here, he's stepped in and we've loved him. We love him an we appreciate having him."

Oregon held the Buffaloes to just 299 total yards, the third straight opponent kept to under 300.

"Oh man, the way our defense is playing, they're definitely playing top of the nation," receiver Jaylon Redd said. "How they're playing, they take the weight off our shoulders, and at the same I'm putting weight on my shoulders just because I want to help the defense so much because I see they're busting their behind to make everything right. They get three-and-outs almost every drive."

Avalos said the defense will need consistency heading into the second half of the season, with a tough slate of games on the road against the Huskies, USC and Arizona State.

"It sounds cliche, but it's really about how we prepare in here," he said, "and we've got to pick that up and obviously keep the focus."