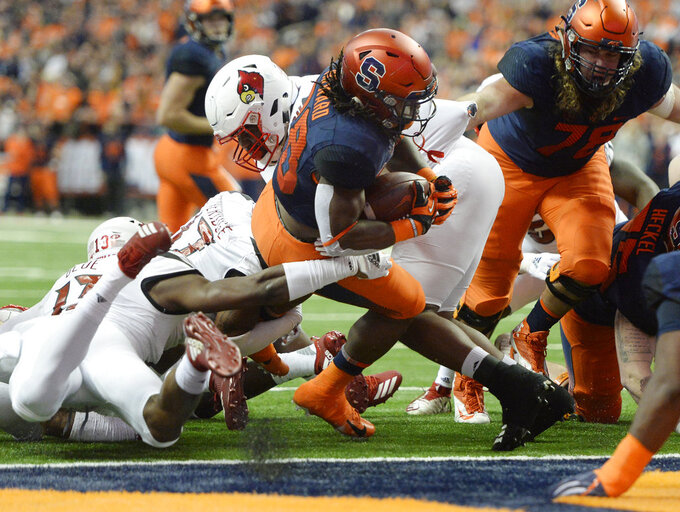 Syracuse running back Jarveon Howard (28) crosses the goal line for Syracuse touchdown against Louisville during the first half of an NCAA college football game in Syracuse, N.Y., Friday, Nov. 9, 2018. (AP Photo/Adrian Kraus)

Moe Neal rushed for a career-best 159 yards and two touchdowns, senior quarterback Eric Dungey ran for two more scores and passed for another, and No. 13 Syracuse took advantage of five Louisville miscues to rout the Cardinals 54-23 on Friday night.

"Those guys definitely put it on us the last couple of years," said Syracuse linebacker Kielan Whitner. "It was good to just get out there and kind of avenge what happened to us in the past. He (coach Dino Babers) made sure that we saw what they did to us, and it cut deep for a lot of us."

The Cardinals had defeated Syracuse four straight times by a margin of 187-61.

"Louisville's the one team that's really smacked us the past three years," Dungey said after celebrating with fans in the aftermath of his final game in the Carrier Dome. "This felt good for us. I really wanted to win by a lot so I'm happy we did."

"I can't say enough about the defense," Syracuse coach Dino Babers said. "Four turnovers in the first half and someone said they had four turnovers on four straight possessions. I'm not even sure I've been part of something like that in 35 years."

"It's a great opportunity," added senior receiver Jamal Custis. "They're a good team. We're going to play like every other game. We're not going to make it a real big deal. We're just going to prepare like we prepare for any other team."

Syracuse has scored 50 or more points in five games this season and tallied 30 points in the second quarter alone to put the game out of reach with a 37-7 halftime lead.

Jarveon Howard gave the Orange a 7-0 lead, scoring on a 1-yard run following a 50-yard field goal attempt by Blanton Creque that was blocked by nose tackle Josh Black.

An interception by Andre Cisco, his fifth pick of the season, set up a 2-yard touchdown run by Dungey.

"We had way, way too many penalties, that killed us," Louisville coach Bobby Petrino said. "Their defensive line has played well all year, they have a great pass rush. They caused some of the penalties, because we were antsy to get out of our stance."

Neal scored from two yards out following an interception by linebacker Kielan Whitner.

The win was the fourth straight for the surging Orange while Louisville lost its seventh straight. The eight wins tied the most victories for Syracuse in a regular season since 1998.

Placekicker Andre Szmyt's 18 points makes him Syracuse's single-season scoring leader with 132. Running back Walter Reyes had the previous high mark with 128 points in 2003.

Szmyt has 27 field goals on the year, tying the ACC single-season record.

NOT JUST A BASKETBALL SCHOOL:

Syracuse fans showed they can support football, too. The largest crowd of the season — 42,797 — turned out for Senior Night.

Louisville: The Cardinals head home for their final two games of the year, but the season is lost. Big changes loom for the Cardinals and the future of coach Bobby Petrino is very much in doubt.

Syracuse: These are great times for Orange football. Six wins and a bowl game would have been considered a successful season, but Syracuse now has loftier goals. Next Saturday's matchup against No. 3 Notre Dame is the program's biggest game in years, and the Orange's high-powered offense gives them a chance for an upset.

Louisville: The Cardinals host North Carolina State on Saturday. The No. 22 Wolfpack will be smarting from their loss to Wake Forest.

Syracuse: The Orange travel to Yankee Stadium on Saturday to play Notre Dame in a game that will go a long way in determining Syracuse's — and Notre Dame's — postseason destination.