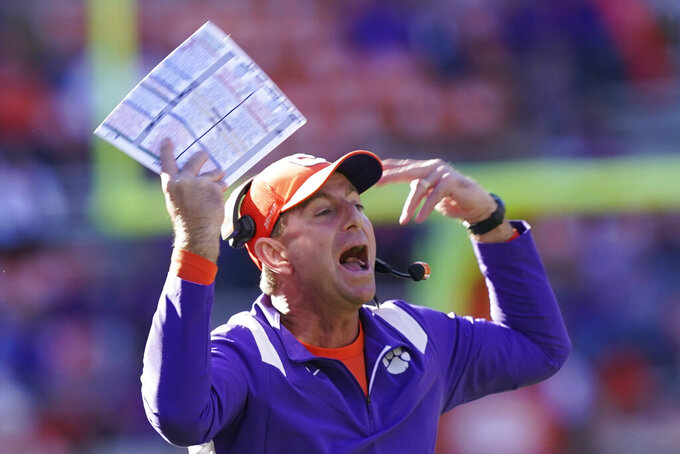 Clemson head coach Dabo Swinney yells towards the players in the second half of an NCAA college football game against Connecticut, Saturday, Nov. 13, 2021, in Clemson, S.C. (AP Photo/Brynn Anderson)

CLEMSON, S.C. (AP) — No. 13 Wake Forest has a huge final step if it hopes to end Clemson's reign atop the Atlantic Coast Conference: end its 12-game losing streak to the Tigers.

The Demon Deacons (9-1, 6-0 ACC) can win the ACC Atlantic with a victory Saturday at Clemson. Something Wake Forest hasn't been able to do since getting a win against the Tigers (7-3, 5-2) in 2008. The Demon Deacons last win at Death Valley was decade earlier than that, coming in 1998.

“It’s not really a surprise that they’re in the position that they’re in, still in the talk with the ACC,” Wake Forest linebacker Luke Masterson said. “We kind of knew that we’re going to have to go through Clemson if we’re going" to win the division."

Wake Forest can reach its first ACC title game since 2006 even with a setback against Clemson. The Demon Deacons could still clinch a berth with a win at Boston College in their regular-season finale.

Clemson coach Dabo Swinney said his team's goal is to keep its title hopes alive during what has been and inconsistent and unexpected season. the Tigers have won the last six ACC titles and reached the College Football Playoff each season from 2015 through 2020.

Only one of Wake Forest's defeats during its Clemson losing streak was single digits, a 31-28 loss on a last-second field goal in 2011 that wrapped up the Tigers trip to the ACC championship game. Clemson went on to win the first of seven league titles under Swinney.

At the ACC's preseason football gathering last July, Wake Forest coach Dave Clawson hoped the Clemson came would be a battle for the division. He got his wish.

“They’ve been the best team in the ACC,” Clawson said. “So it would be obviously a huge win for our program if we can can find a way.”

With running back Christian Beal-Smith sporting a boot on his foot in missing the N.C. State game, Justice Ellison carried the load and had a three-touchdown game. Ellison ran for 57 yards on 17 carries with two touchdowns, including a critical one with 1:47 left to make it a two-possession game. The Demon Deacons will need more production there to ease the load on quarterback Sam Hartman, who was off-target (20 for 47) against the Wolfpack despite his four TD passes.

Clemson linebacker James Skalski was an end of the bench player the last time the Tigers lost at home in November 2016. The Tigers have won 33 straight at Death Valley, the longest such streak in the country. The sixth-year defender looks to close out his career with another perfect season at home.

“It would be pretty cool to go out with the longest win streak at home,” he said. “And keep it going, not only for my class, but for next year and the year after that.”

Wake Forest’s defense has been a question mark since October, including allowing 56 points in a win against Army and 58 points in their lone loss to North Carolina in a game designated as a non-conference matchup. That unit allowed 42 points last weekend, though the Demon Deacons had three takeaways and held the Wolfpack to 3 of 14 on third downs.

Wake Forest entered last weekend down starting cornerbacks Gavin Holmes and Caelen Carson, while Clawson said Tuesday that cornerback Ja’Sir Taylor was also in question up until gametime. Then receiver Jaquarii Roberson exited early in a game that saw both team having plays repeatedly going down to injuries.

Clawson didn’t go into details on injuries, saying the team would get some players back from injuries but “probably won’t get others.” Clemson will also be without its leading receiver in Justyn Ross, out with a foot injury that Swinney said will require surgery.

The Tigers have been one of the best defenses in the country, leading the ACC in points allowed and 11th nationally in yards given up. Coordinator Brent Venables understands the challenge they'll face in Sam Hartman and the Wake Forest offense. The Demon Deacons “long, slow mesh point” on handoffs will put Clemson's defense in conflict better than any opponent it had seen all year.