No. 17 Houston looks to clinch title game berth at Temple 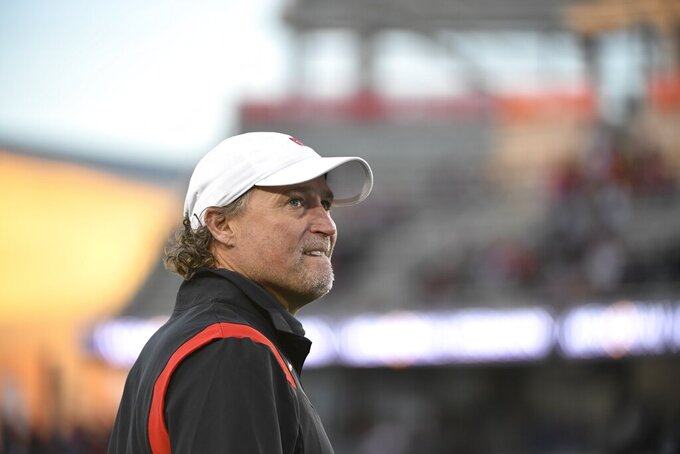 Houston head coach Dana Holgorsen on the sideline against SMU during the first half of an NCAA college football game Saturday, Oct. 30, 2021, in Houston. (AP Photo/Justin Rex) 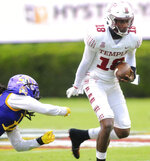 PHILADELPHIA (AP) — There are so many things that Dana Holgorsen’s football team can dream about accomplishing in the next month. For the Houston football coach, one thing on his mind is not forgetting to set an alarm clock this week.

Holgorsen wants to make sure there are no jolting wake-up calls when the No. 17 Cougars head to Philadelphia on Saturday for a noon kickoff against a Temple squad that has lost four straight games.

“We’re going to have to play noon games at some point,” Holgorsen said this week. “We have two in the next three weeks. ... But we have to adjust our mindset a little bit and focus on getting up early on the East Coast and playing a game. I’m excited about that.”

A win on Saturday would lock the 8-1 Cougars into the American Athletic Conference championship game and a likely showdown against No. 2 Cincinnati (No. 5 CFP), which is chasing the first College Football Playoff invitation from Group of Five league.

The Houston offense has been stellar in high scoring wins against SMU (44-37) and at South Florida (54-42) over the last two weeks. After struggling through the early portion of the season with a hamstring injury, Cougars junior quarterback Clayton Tune has become a major positive factor. Tune has completed 48 of 55 passes for 797 yards and seven touchdowns in the last two games and hasn’t thrown an interception since Oct. 1.

“He’s had two really, really good games in a row, and he still isn’t 100%, which is why we’re not doing a lot of run game with him,” Holgorsen said. “He’s good enough to be able to scramble around and make some plays. .... I would say he’s playing at a very high level, and that’s why our offense has improved over the last couple weeks.”

The supporting cast for the Cougars has also stood out — including wide receiver Nathaniel Dell (56 catches, 839 yards, 8 TDs) and running back Alton McCaskill (603 rushing yards, 12 touchdowns).

Last week’s win at USF marked the first time in school history the Cougars had multiple 100 yard rushers and multiple 100 yard receivers in the same game. Ta’Zhawn Henry had 130 yards on the ground to compliment McCaskill’s 125 yards rushing. Dell had 164 yards receiving and was joined by KeSean Carter, who had 123.

“The quarterback is playing at a high level and they have really good skill around him,” Temple coach Rod Carey said. “And the offensive line is allowing them to have space and creating some holes.”

After enjoying years of success under Matt Rhule and Geoff Collins, Temple is near the bottom of the American Conference in Carey’s third year as coach. The Owls have lost their last four games by a combined score of 180-27.

One main issue for Temple has been stopping the run. The Owls have allowed 221.4 yards per game on the ground this season — the eighth worse mark in the FBS entering Week 11.

“We have to eliminate the big play,” Carey said. “We had 12 tackles for loss last week, but then we allowed eight plays of more than 10 yards. That evens things out and you end up with a bad stat sheet with the run game. It’s gone from a real high level to a real low level. We have to eliminate the really big plays to bring the level up.”