No. 2 Iowa, leading West, has eye on prize for Purdue visit 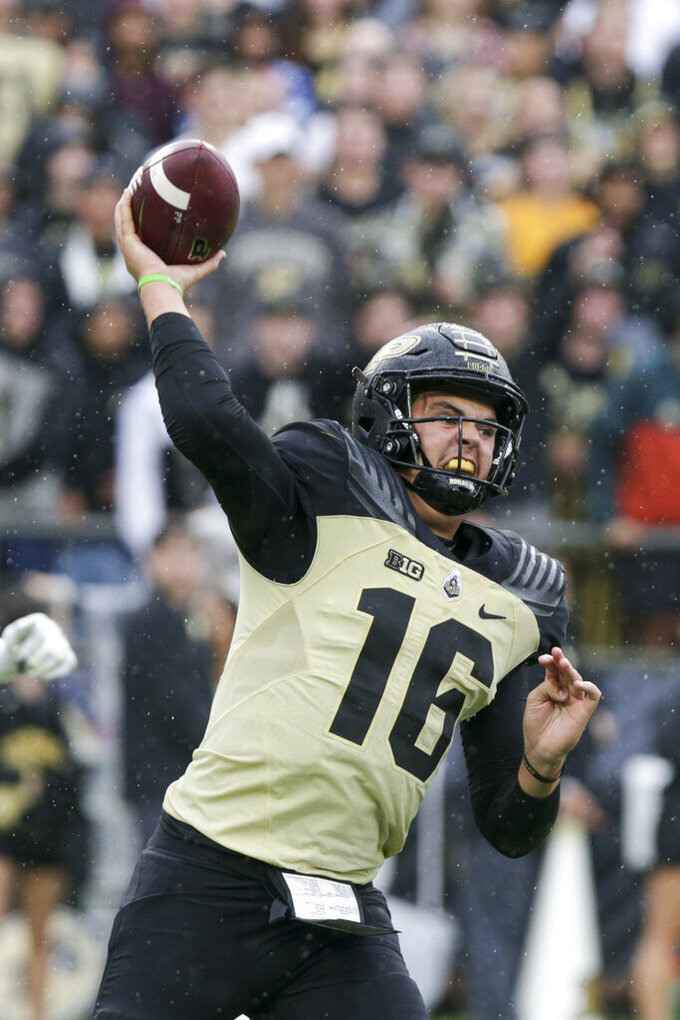 IOWA CITY, Iowa (AP) — Kirk Ferentz is trying to keep his team grounded after No. 2 Iowa achieved the program's highest ranking since 1985.

The Hawkeyes (6-0, 3-0 Big Ten) are on a 12-game winning streak with their victory over a top-five Penn State last week and have taken control of the Big Ten West entering their game against Purdue (3-2, 1-1) on Saturday.

“We’re just at the halfway mark,” Ferentz said. “I have no idea how many Kentucky Derby winners won that were leading at halftime or the first whatever.”

If there's one team that should be able to keep the Hawkeyes focused, it's Purdue. Jeff Brohm's Boilermakers have won three of the last four meetings.

The Boilermakers have beaten Iowa with their passing game, averaging 292.8 yards through the air over the last four matchups.

“We have at times had the ability to throw the football, maybe more so than some other Big Ten teams, so that probably has helped us to a certain degree,” Brohm said.

Ferentz said the Boilermakers have hurt his team with deep balls: “And it sounds pretty basic, but a lot of people won’t try it that way and they have done a good job of that.”

Iowa’s secondary leads the nation in interceptions (16), takeaways (20) and turnover margin (plus-15).

“If a team isn’t performing well at all 11 positions on offense and there’s some weak link, they’re going to find it,” Brohm said. “They’re going to have their eyes strapped on the quarterback, break on the ball and make plays, and they’ve done that against every single opponent they’ve had.”

Iowa will be without cornerback Riley Moss, who injured his knee on an interception against Penn State. Moss, who leads the Hawkeyes with four picks, won't require surgery and should return in a couple weeks, Ferentz said.

Terry Roberts will move into Moss’ spot. Roberts has an interception and two pass breakups and has been a key contributor on special teams.

Purdue wide receiver David Bell has a combined 26 catches for 318 yards and four touchdowns in his two previous games against Iowa. Bell comes into this game second in the Big Ten with 27 catches for 439 yards and three TDs.

“I don’t want to depress myself and look at how many catches he’s had in two years but it’s significant,” Ferentz said. “But the real challenge is that they have other guys, too. Their other receivers are good, they have good size.”

Purdue has quarterback options, and the Hawkeyes are preparing for all of them.

Junior quarterback Jack Plummer started the first four games, then was replaced by Aidan O’Connell in the second half of the 13-9 win over Illinois. O’Connell started Oct. 2 against Minnesota, throwing for 357 yards and a touchdown in a 20-13 loss.

O’Connell threw for three touchdowns in last year’s game against Iowa; Plummer threw for 327 yards and two touchdowns against the Hawkeyes in 2019.

Dual-threat quarterback Austin Burton has played in two games this season, completing all five of his passes.

“We have a room of quarterbacks that have all played and they all have to be ready to play,” Brohm said. “Whatever we feel like we need to do to win, we’re going to do.”

Iowa is unbeaten since linebacker Jack Campbell returned from an illness after the third game last year. He leads the team and is fourth in the Big Ten with 55 tackles.

“I know that having him in the lineup doesn’t hurt,” Ferentz said. “I don’t know if that’s a full story, but it doesn’t hurt."

Purdue is 5-10 all-time against opponents ranked No. 2 in the Associated Press poll. A Brohm-coached team played a No. 2 team in 2018, when the Boilermakers upset Ohio State 49-20.