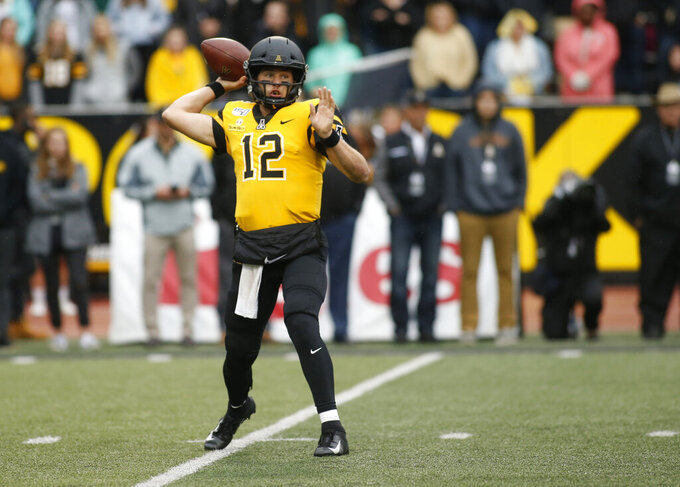 MOBILE, Ala. (AP) — Appalachian State is handling its national ranking much better this time around, so far.

Now, the 21st-ranked Mountaineers put it to the test again with a visit to South Alabama Saturday as 25 ½-point favorites. The highest ranked team in Sun Belt Conference history, Appalachian State (6-0, 3-0) celebrated its ranking by beating Louisiana-Monroe 52-7 after making a brief cameo in the Top 25 last season only to quickly lose.

First-year Mountaineers coach Eliah Drinkwitz said his players are already used to being a target thanks to a tradition that now includes three straight Sun Belt titles.

"That's just the expectation every time you play a game," Drinkwitz said. "That's not really something that we've discussed in-depth.

"It's not that we're not excited and happy about being ranked, it's just not a focus of ours."

South Alabama (1-6, 0-3) is trying to halt a five-game losing streak and has only beaten FCS Jackson State.

The Jaguars, who are allowing 30.4 points per game, will have to contend with an offense that ranks seventh nationally in scoring (42.8 points per game).

"Appalachian State is a heck of a football team," South Alabama coach Steve Campbell said. "They are playing really well right now and they have gotten better as the season has progressed. They gave up some points early in the year, but they've been getting better and better on the defensive side.

"It will be a big challenge for us, but it's one that we are definitely looking forward to."

This is the first time South Alabama has played two ranked opponents in a season. The Jaguars lost 35-21 in the opener at then-No. 24 Nebraska.

Some other things to know when South Alabama plays host to No. 24 Appalachian State on Saturday:

The game will feature two of the nation's leaders in all-purpose yards. Appalachian State running back Darrynton Evans ranks third, averaging 158.5 yards per game. He has run for 676 yards and 10 touchdowns while also returning a kick for a score. South Alabama counters with Tra Minter, who leads the team in rushing with 563 yards and in catches with 25. Minter also returns kicks and punts and ranks sixth nationally in all-purpose yards (146.4 per game).

App State's 52-7 win over Western Division leader ULM marked the first win by a Top 25 ranked Sun Belt team and pushed the Mountaineers to bowl eligibility for the fifth straight season. Only Marshall has made more consecutive bowl appearances after jumping to the FBS ranks (six), and App State is the only program to win each of its first four bowl games in consecutive seasons.

With an 11 a.m. Central kickoff, both teams have to avoid a lackadaisical start.

"We're just going to have to do a great job of creating and manufacturing energy and make sure that we're ready to play when the ball kicks off," Drinkwitz said. "Whether it's 11, 6, 10, whatever, we'll be ready to play football."

Appalachian State's 12-game winning streak trails only Clemson (22) and Ohio State (13) among active streaks for FBS teams. It's tied for the second-longest winning streak in program history, matching a 12-0 start in 1995. The Mountaineers won 17 straight games from 2006-07.