No. 3 Clemson focused heading into final push to playoffs 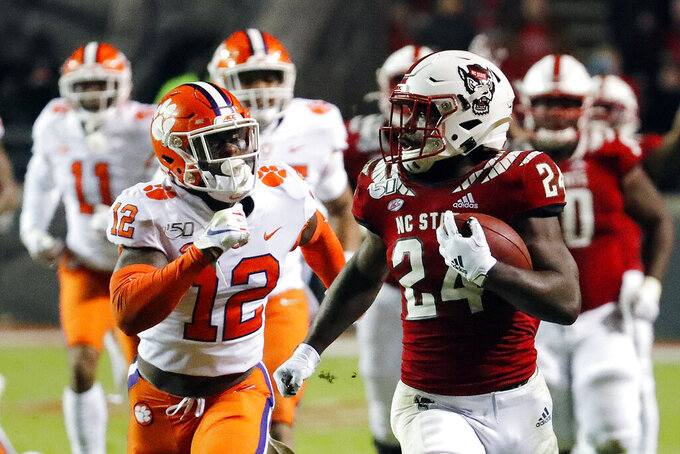 North Carolina State's Zonovan Knight (24) runs away from Clemson's K'Von Wallace (12) for a touchdown during the second half of an NCAA college football game in Raleigh, N.C., Saturday, Nov. 9, 2019. (AP Photo/Karl B DeBlaker) 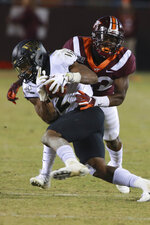 CLEMSON, S.C. (AP) — No. 3 Clemson is back in playoff position with no plans to give up its foothold after clinching a fifth straight ACC Atlantic Division title. Even some past Tiger stars are helping make sure this group maintains its focus.

Clemson (10-0, 7-0 Atlantic Coast Conference) had expected a showdown for the division crown Saturday against surprising Wake Forest (7-2, 3-2). But the big-game potential ended with the Demon Deacons 36-17 loss at Virginia Tech last week combined with the Tigers’ 25th straight win, 55-10, at North Carolina State.

There’s still plenty at stake. Clemson, fifth in the first College Football Playoff poll, moved up to third and is poised for a chance to defend its national title — as long as they continue winning.

Co-offensive coordinator Tony Elliott said coach Dabo Swinney got a text from last year’s All-America defensive end Clelin Ferrell about staying strong down the stretch, “’Hey, remind these guys how focused we were in the month of November.’”

Elliott is confident these Tigers are primed to keep the run going.

“I think these guys are in a good spot,” Elliott said. “They’ve all learned, in their own way, how to block out the noise.”

The defending national champions have several milestones to chase even with their spot in the league title game secure. The Tigers would finish a second-straight perfect run through the ACC’s regular season. Beating Wake Forest would also be its 22nd consecutive home win, a program mark they tied two weeks ago against Wofford.

“The edge is always there,” Clemson safety K’Von Wallace said. “We’ve all got goals, we’ve all got standards that we set. Anytime you let your foot off the gas pedal of an opponent, you’ll find your self on the bad end. We’re locked in for sure.”

Clemson has certainly been locked in against Wake Forest in recent years. The Tigers have won 10 straight in the series, including last year’s 63-3 win in Winston-Salem, North Carolina. Demon Deacons coach Dave Clawson said that mid-season loss helped his team refocus, qualify for a bowl and finish with a winning record. Wake Forest has gone 11-5 since the Clemson blowout.

“After that game we had to do some real soul searching as a team and as a staff,” Clawson said. “I was proud, since then, of how our team has responded. Here we go and we get another shot at them.”

Some other things to watch when Wake Forest plays No. 3 Clemson:

Clemson will have 19 players travel down the hill into the stadium for a final time. That includes ex-offensive lineman Zach Giella, who along with defensive tackle Dexter Lawrence and tight end Braden Galloway failed drug tests last December before the College Football Playoff. All were subject to a yearlong NCAA ban and, since Giella had only a year of eligibility to go, he left the team. Galloway, a sophomore, can return for this year’s playoffs if Clemson gets in.

North Carolina coach Mack Brown is tired of those downgrading Clemson. Brown, whose team lost to Clemson 21-20 in September, said the Tigers have traditionally gotten stronger as the season continues, something he sees again this fall.

“So everybody better look out, because I think they’re, they’re not peaking, but they’re headed and they’ve got a strong trend up,” Brown said.

Clemson coach Dabo Swinney can thank Wake Forest for his job. The Demon Deacons last beat the Tigers in 2008 and a few days later, then coach Tommy Bowden was out with Swinney elevated to interim coach. Swinney got the full-time job right after the season and has led Clemson five ACC titles and national championships in 2016 and 2018.

Count on Clemson changing things up to have some fun. Last week, 330-pound offensive lineman John Simpso n scored on a 1-yard touchdown. Linebacker James Skalski failed on a point-after try in the second half. Tailback Travis Etienne said he’s asked to punt before. Does the junior have any punting skills? “Not at all,” he said, laughing. “But you miss 100% of the shots you don’t shoot, so it’s worth a try.”