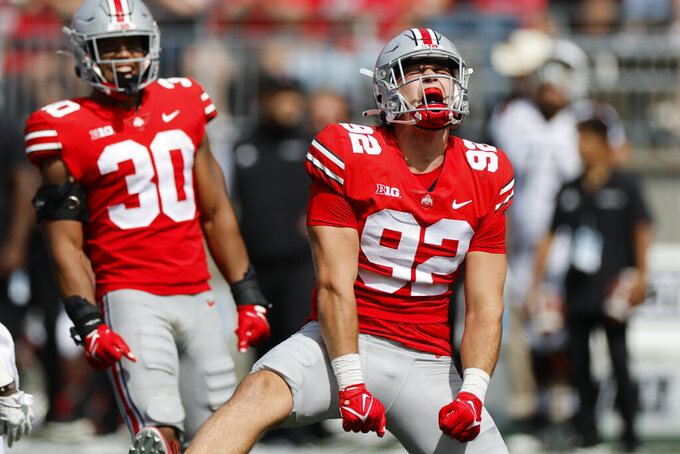 Line: Ohio State by 31 1/2, according to FanDuel Sportsbook.

The Rockets should give Ohio State a little more trouble than Arkansas State did last week. Toledo could be one of the best teams in the Mid-American Conference this year, but it's hard to get an accurate reading because blowout wins in the first two games came against overmatched competition. The Buckeyes got past then-No. 5 Notre Dame in the season opener before squashing Arkansas State last week. The Buckeyes will work on fine-tuning their explosive offense ahead of next week’s Big Ten opener against No. 19 Wisconsin.

Ohio State’s passing game against Toledo's defense. The Rockets had a solid defense last year and are expected to again be among the MAC leaders. When it starts clicking, the Buckeyes offense can run up the score quickly. QB C.J. Stroud seems to be finding his touch.

Toledo: QB Dequan Finn rushed for 74 yards and two touchdowns last week while passing for 177 yards and another score. He is fast and elusive enough to take off and make gains on broken plays.

The teams haven't met since 2011 when the Buckeyes beat the Rockets 27-22 in Columbus. ... Dallas Gant transferred from Ohio State to Toledo and has been one of the team's top linebackers so far this year. ... The Rockets have lost all four games against teams ranked in the AP Top 25 since Jason Candle took over as head coach in 2015. ... Toledo has 15 returning starters from last year's 7-6 team. ... Ohio State has not lost a game to an in-state school since a 7-6 loss to Oberlin in 1921. They tied Wooster in 1924. ... Stroud threw for 351 yards and four touchdown passes last week. ... Toledo outscored its first opponents — Long Island University and UMass — by a combined 92-10. ... In coach Ryan Day's 40 games as head coach, Ohio State has scored 30 points or more 32 times. ... Toledo is 2-0 for the first time since 2017. The Rockets went 11-3 and won the MAC title that season.