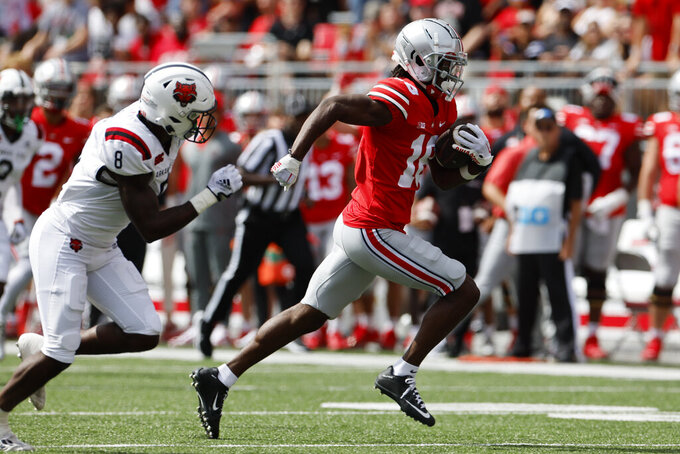 Ohio State receiver Marvin Harrison runs past Arkansas State defensive back Eddie Smith on his way to a touchdown during the first half of an NCAA college football game Saturday, Sept. 10, 2022, in Columbus, Ohio. (AP Photo/Jay LaPrete)

COLUMBUS, Ohio (AP) — No. 3 Ohio State tried last week to smooth out its early season wrinkles against a heavy underdog.

Buckeyes coach Ryan Day doesn't think they've ironed out enough of them to be a championship contender just yet.

The Buckeyes (2-0) were flagged nine times for 85 yards Saturday after being penalized seven times for 75 yards in their opener against Notre Dame.

“That's ridiculous,” Day said this week. “So we've got to get that cleaned up.”

The Buckeyes have one more chance to tune up before charging into the Big Ten schedule when Toledo visits Ohio Stadium on Saturday night.

The Rockets (2-0) were projected to finish second in the Mid-American Conference West Division, but it's hard to get a good read yet because their opponents were so overmatched in the first two games. Toledo buried Long Island University and UMass by a combined score of 92-10.

The Rockets will be four-touchdown underdogs this week.

Upsets around college football in the last couple weeks got the attention of the Buckeyes.

“Doesn’t matter who you play, everybody’s coming in to take your spot in the rankings and whatever the case may be,” Stroud said. “So I think that’s just something with our team. We don’t want to learn the hard way this season.”

AP Preseason All-American running back TreVeyon Henderson has continued to split carries with fellow second-year back Miyan Williams. The combination has been working for the Buckeyes since last season.

Henderson rushed for 91 yards and Williams for 84 and a TD against Notre Dame. They combined for 123 last week, with Henderson scoring twice.

“I definitely think they’re a dynamic duo,” Stroud said. “Miyan has been good since he got here. His pass blocking is tremendous. Same with Tre. Tre’s taking it really serious, which helps me. And I definitely think that our approach in the offseason, and making sure we had to run ball, is paying dividends.”

Ohio State defensive coordinator Jim Knowles said one of the challenges with Toledo is containing quarterback Dequan Finn, who is always a threat to turn broken plays into positive yards.

“I think he can run it any time he wants to, not as much designed quarterback runs, but we have to be ready for that,” Knowles said. “He makes a lot of plays with his feet. Scrambling situations, that’s where we really have to be aware of what he can do. He has all the tools, makes all the throws, very capable.”

Ohio State's star receiver Jaxon Smith-Njigba has been sidelined with a hamstring problem since early in Week 1. Day said he could be back Saturday.

“We’re going to expect him to play this weekend,” Day said. “We’ll see how this week goes, but we’re going to only put him in the game if we feel 100% sure that he’s ready to roll.”

Harrison and Emeka Egbuka have emerged as go-to receivers with the two on the shelf.

Ohio State hasn’t lost to an in-state opponent since 1921 when Oberlin College — southwest of Cleveland — edged the Buckeyes 7-6. Ohio State has beaten Toledo three times, most recently in 2011.