No. 5 Clemson has history, focus on its side vs FCS Furman 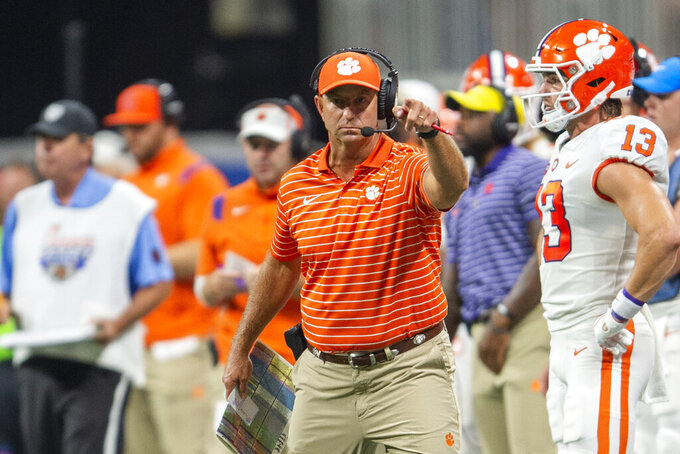 CLEMSON, S.C. (AP) — No. 5 Clemson has plenty of history on its side against Furman, including a perfect record against FCS teams, a home win streak that's nearly six years old, and a run of success over the Paladins that's lasted 84 years.

More important than any of that, Clemson coach Dabo Swinney says, is his players' well-honed focus on their next opponent, whether it's from a lower division or the sport's top tier.

The Tigers (1-0) start their home season Saturday against Furman (1-0).

Clemson has a 36-0 record against FCS teams since Division I football was split in two. The Tigers haven't lost at home since November 2016 when Pitt shocked them 43-42. And the Paladins of the Southern Conference haven't beaten Clemson since 1936, a run of 31 consecutive losses through the years.

“Not an opponent, not the weather, not a kickoff time, not the scoreboard should impact your preparation, efforts, your will to win, all of that stuff,” Swinney said. “Obviously, there are games where there's a little more juice from time to time. But the meat and potatoes has to be the opportunity to win again.”

Furman has had some success against Football Bowl Subdivision programs the past four decades with wins over Georgia Tech, North Carolina State, North Carolina and, its last one, UCF in 2015. The Paladins' last victory over an Atlantic Coast Conference program was a 1999 win over North Carolina.

“We will have to play exceptionally well to have a chance,” he said. “But that’s what we plan on doing.”

Starting quarterback DJ Uiagalelei showed signs in Clemson's opener that his offseason regimen — shedding weight, improving technique — is paying off. Uiagalelei threw for one touchdown and ran for another. He connected on 19 of 32 passes for 210 yards. Swinney was pleased with how his junior starter overcame some early struggles to get his team in gear for a 41-10 win against Georgia Tech.

Furman is a member of the FCS Southern Conference and is the league's all-time leader with 14 football championships. The last for the Paladins came in 2018. They have been to the FCS playoffs 19 times, including their last postseason in 2019. Furman was the FCS national champion in 1988. The Paladins will receive $415,000 from Clemson for Saturday's game.

Clemson blocked two punts in the opening win over Georgia Tech. It was the first time the Tigers notched a pair of punt blocks since a 2007 win over South Carolina. Ex-walk-on safety Carson Donnelly, in his fifth season, blocked a punt in the second quarter while first-year linebacker Wade Woodaz blocked another in the fourth quarter.

Furman quarterback Tyler Huff transferred from Presbyterian and got off to a strong start in the Paladins' win over Division II North Greenville in the opener last week. Huff threw for 189 yards and two TDs. He also ran for a 56-yard touchdown. Huff's showing lines up with past transfers into Furman. Chris Forcier went from UCLA to the Paladins before the 2016 season and ran for an 85-yard TD in his first game at Furman. Ex-Florida passer Ingle Martin threw for 213 yards and two touchdowns in his Furman debut in 2004.

Ella Bresee, the younger sister of Clemson defensive tackle Bryan Bresee, will be honored by the Tigers during the game. The teen is fighting brain cancer yet has provided smiles and inspiration to others during her treatments. She has a rose tattoo on her right forearm with the words, “Ella Strong." Her old brother said 15-year-old Ella's encouragement during his recovery from a torn ACL was invaluable.