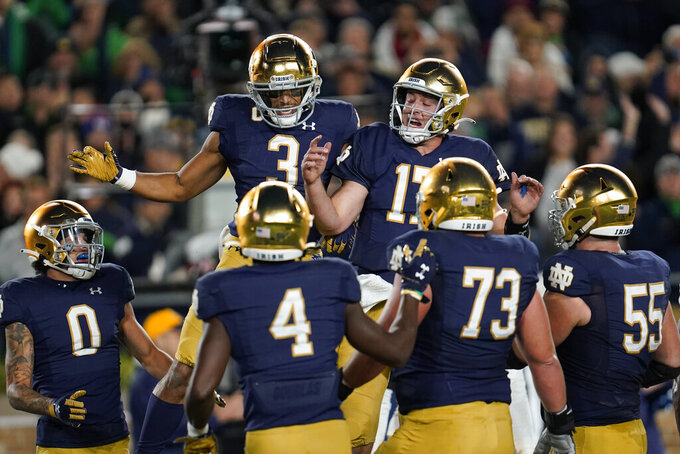 SOUTH BEND, Ind. (AP) — Brian Kelly stood in front of his team after Notre Dame's best offensive performance of the season, preparing to hand out the game ball for the 44-34 win over North Carolina.

Cheers erupted in the locker room when the coach awarded it to the offensive line — a moment that put into perspective the significant strides made throughout the season. The line saw a dip in performance last weekend in a win over Navy, but it was still a marked improvement from earlier in the year.

“It wasn’t our best day, but it was a solid day,” Kelly said Monday as the seventh-ranked Fighting Irish (8-1, No. 9 CFP) prepared for this week's game at Virginia (6-3). “We didn’t take a step back in terms of what we’re asking our guys to do up front.”

It is the latest twist in a season-long storyline about an inexperienced line, a unit with four new starters alongside senior center Jarrett Patterson that for the first five games didn’t fit Notre Dame’s “O-Line U” moniker.

At the beginning of the year, inexperience was balanced by promise. Then, freshman Blake Fisher suffered a knee injury in week one, sophomore Michael Carmody sprained his ankle in week two and sophomore Tosh Baker was ruled out against Cincinnati due to concussion protocols.

The week-to-week shuffle at left tackle quickly gave way to inconsistencies and mistakes; Notre Dame gave up six sacks in two of its first four games. In September, the Irish saw three players start at left tackle alongside Zeke Correll at left guard.

Enter left tackle Joe Alt and left guard Andrew Kristofic, a duo that swiftly helped restore one of Notre Dame’s biggest weaknesses to its status as a perennial strength. Alt, a 6-foot-7, 305-pound freshman from Minnesota, and Kristofic, a 6-foot-5 junior who had played four games in each of his first two seasons, earned their first starts against Virginia Tech and Southern California, respectively.

“I just think communication has been key, just chemistry, just being able to work with each other,” Alt said. “Every practice is just, you get a little better with each other.”

Since allowing an average of more than four sacks per game in those first five contests, the Irish have averaged only 1.5 the last four games.

The improved play has been accompanied by a surge in the Irish ground game. Through the first five games, Notre Dame didn’t break 140 rushing yards. That changed in Blacksburg, when the Irish had 180 yards on the ground against Virginia Tech, followed by 170 against USC, 293 against North Carolina and 150 against Navy.

Running back Kyren Williams has delivered his best performances of the season, frequently making his way over to his linemen for fist bumps along the way.

“I’ve seen it since Virginia Tech,” Williams said of the improved o-line performance. “We’ve been going upwards running the ball wise, the confidence, the mindset, the identity of who we are as an offense and what we call ourselves, ‘Big O.’ It’s there. It’s coming along.”

Patterson attributed the growth to multiple factors, including an emphasis on the idea that each member of the unit focuses solely on his job.

“But I think the biggest one is guys playing with more confidence out there,” Patterson said. “Not being hesitant, firing off the ball, and trusting the guy next to him.”

Confidence has come with time and reps. Entering the season, Irish offensive linemen accounted for a combined 31 starts at Notre Dame, a number that was matched by right guard Cain Madden’s career starts at Marshall, bringing the total to 62. Last year's starting line boasted more than 100 starts when the season began.

Patterson came into this year with 21 starts and graduate student right tackle Josh Lugg added eight more. Alt credited those two veterans with guiding his acclimation to the starting role, saying the center helped him with communication skills throughout the week.

“I really focus on that in practice,” Alt said. “And I think that allowed me to kind of translate that into games.”

And it has translated. With three regular season games left, a strong o-line performance is once again expected, not a surprise.