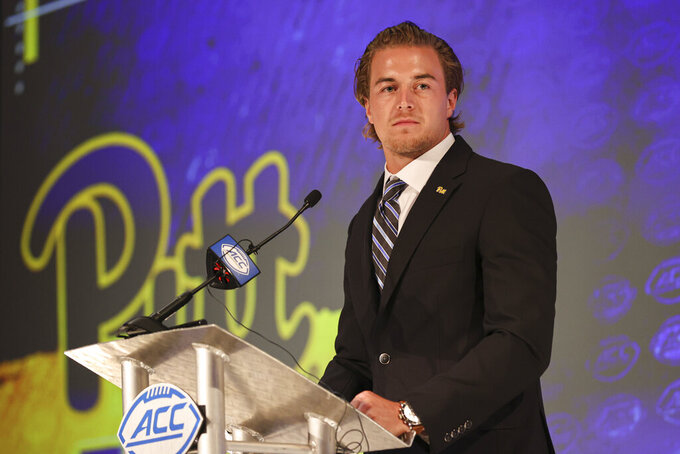 PITTSBURGH (AP) — By Pat Narduzzi's math, his skill position players ran so much during Pittsburgh's offseason conditioning program — 113 miles to be exact — that they could have made it from the team's training facility all the way to Akron, Ohio.

The ultimate destination for Narduzzi's consistently enigmatic team is considerably farther away: Charlotte and a spot in the ACC title game in early December. Narduzzi believes the Panthers are up for the challenge in the typically wide-open Coastal Division.

“We’re picked fourth (in the division) going into the season, which is great,” Narduzzi said. “Pick us eighth, whatever, tenth.”

The Panthers have spent much of Narduzzi's six seasons spinning their wheels somewhere in the middle, never losing more than seven games in a given year, never winning more than eight. It's led to stability, sure, but also led to a bit of a Groundhog Day scenario. Pitt flirts with success, stumbles a bit then recovers but falls short of a true breakthrough.

Last season, Pitt was a couple of minutes away from the program's first 4-0 start since 2000 when North Carolina State drove the length of the field to pull off a 30-29 stunner. Three more losses followed before the Panthers won three of their final four to finish 6-5.

Narduzzi is only too eager to put 2020 and its various levels of strangeness due to the pandemic in the rearview mirror.

“Last year was an odd year,” he said. “I hope that word’s gone away, to be honest with you. I hope everybody forgets what that is.”

There's a far greater sense of normalcy this time around, thanks in part to the return of quarterback Kenny Pickett. Pickett opted for a fifth season rather than head to the NFL, a decision he made in part because he believes there's more than a little unfinished business to be done.

Pickett is fifth in school history in yards passing and thirdin career total offense and could become the all-time leader in both categories if he stays healthy. That was an issue last season, when an ankle injury sidelined him for losses to Notre Dame and Miami.

Narduzzi is hoping an improved running game takes some of the pressure off Pickett. There were times when Pickett was the team's best — and sometimes only — option. He ran for a team-high eight touchdowns, but all that running took a toll on his body. Pitt's best chance to being a factor means keeping Pickett healthy and having a rushing attack that finished 119th in the country in 2020 take a major step forward.

Sophomore Israel Abanikanda drew raves from Narduzzi for his work during the spring. Abanikanda ran for 95 yards in limited action in 2020.

“He’s been consistent and he’s focused,” Narduzzi said. “I think he’s serious about his game. He wants to be the guy.”

The Panthers lost defensive ends Patrick Jones II and Rashad Weaver — and their combined 16 1/2 sacks — to the NFL. Senior Deslin Alexandre is the most experienced returner in a group that was so dominant at times last season Pitt didn't need to blitz to wreak havoc in the opposing backfield. Calijah Kancey, Keyshon Camp and Devin Danielson are part of a talented and deep group at defensive tackle. Considering the quality of quarterbacks the Panthers will face when they get into the teeth of the ACC schedule, Alexandre and company will need to be able to work on their own so the linebackers and safeties can drop into coverage.

Jordan Addison led the Panthers in receptions (60), yards receiving (666) and receiving touchdowns (four) as a freshman last season. The task for offensive coordinator Mark Whipple is to find creative ways to get Addison the ball.

“Last year he’s a freshman, and you just want him to do that one thing,” Narduzzi said. “This year, we’ve got to be able to move him around, motion him and do different things so they can’t find them.”

The Panthers are set up to have a shot at the program's first double-digit win season since 2009. The true litmus test on how far the Panthers might climb probably lies in a three-week stretch in October that starts with a trip to Virginia Tech (Oct. 16) followed by visits from Clemson (Oct. 23) and Miami (Oct. 30). Go 2-1 in that stretch and the Panthers could very find themselves in the ACC title mix when North Carolina comes to Heinz Field on Nov. 11.