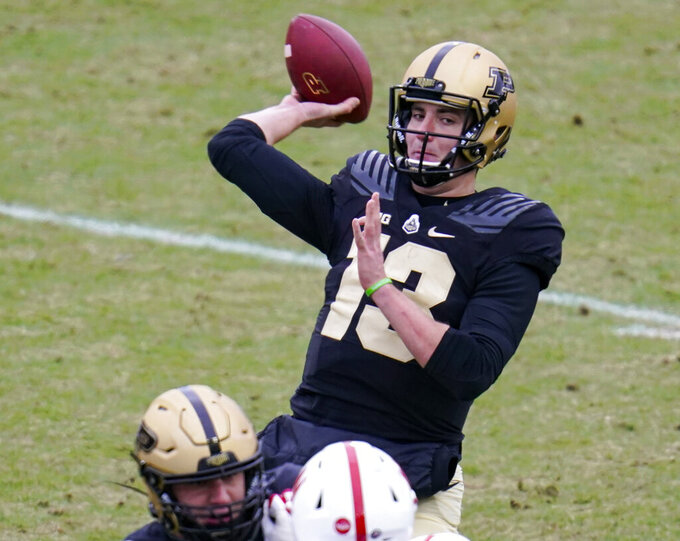 Aidan O'Connell is trying to earn his second straight opening day start. And this time, former UCLA backup Austin Burton intends to put his name in the mix, too.

For a program seeking stability at football's most critical position, picking a winner may be the most important decision the Boilermakers make all year.

“You're looking for someone who can do it right all the time,” co-offensive coordinator and quarterbacks coach Brian Brohm said after Purdue's second practice. “It's consistent play and a guy teammates know every time they step in the huddle will make the play be successful, someone they believe in.”

Over the past two seasons, it's been a revolving door with Plummer and O'Connell getting their share of snaps.

After losing the battle to Elijah Sindelar in 2019, Plummer replaced the injured starter in Week 2, then started the next six games before suffering a season-ending broken right ankle.

That's when O'Connell took over, closing out a victory over Nebraska and leading the Boilermakers past Northwestern before losing the season's final two games.

As Plummer fought his way back, O'Connell solidified his hold on the job and was named the starter for last season's shortened six-game schedule. He won the first two games before suffering a season-ending foot injury in a Week 3 loss to the Wildcats and giving way to Plummer, who lost the final three games only to presumably open camp in the No. 1 spot.

The battles have taught Plummer some hard lessons.

Plummer has all the natural gifts. The strong-armed 6-foot-5, 220-pounder from Arizona came to Purdue as one of the top quarterbacks in the 2018 recruiting class.

With two older quarterbacks — Sindelar and David Blough — ahead of him on the depth chart, Plummer figured he'd eventually get a chance to become the next big star at the Cradle of Quarterbacks.

Many believe the competition may again come down to Plummer and O'Connell.

But Burton could make it a three-man race.

At 6-2, 210 pounds, he appears to be a combination of Plummer and O'Connell. He moves well, has a strong enough arm and may be more accurate than the others. He's the son of former Northwestern quarterback Steve Burton and the grandson of former NFL player and College Football Hall of Famer Ron Burton.

Burton enrolled early at UCLA before transferring to Purdue in 2020 after making only one career start with the Bruins.

Burton might have had a stronger chance last year if spring football hadn't been canceled and the Big Ten hadn't modified the season after initially announcing it had been canceled. Now, though, a complete offseason and a full camp schedule could give Burton an opportunity to prove himself.

And after failing to become bowl eligible each of the past two seasons, the first two misses during Jeff Brohm's head coaching career, the Boilermakers want to make sure they get this one right.

“I'm looking for the best decision-maker, the most accurate thrower and toughness," Brian Brohm said. “The guys know I grade that every single day at practice and I'm pretty up front about my grades, so they know it's a close competition."