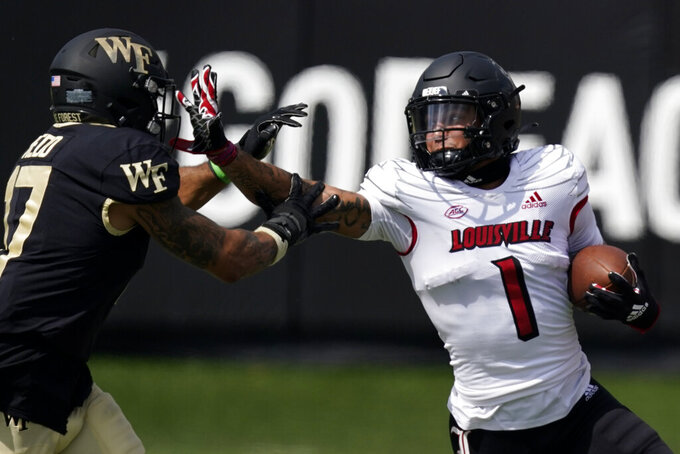 WINSTON-SALEM, N.C. (AP) — Nick Sciba was ready when Wake Forest set him up with the shot at a winning field goal. He capitalized, just like the rest of these 24th-ranked Demon Deacons sitting atop the Atlantic Coast Conference race.

Sciba hit from 29 yards with 22 seconds left to help Wake Forest beat Louisville 37-34 on Saturday, keeping the Demon Deacons unbeaten while ending a two-game skid against the Cardinals.

Sam Hartman threw for 324 yards and two touchdowns to lead the offense for the Demon Deacons (5-0, 3-0), who got a huge boost late from Justice Ellison with several chain-moving runs on the go-ahead drive.

They had won each of their first four games by comfortable margins, but handled a close game just fine.

“We expect to go the distance with almost every team we play,” said receiver Taylor Morin, who had six catches for 122 yards and a 42-yard touchdown. “I think that mentality and that type of preparation pays off.”

On the last drive, Ellison ran seven times for 41 yards. And Hartman connected with Jaquarii Roberson (six catches for 135 yards) on third down for 12 yards to keep the Demon Deacons moving to give Sciba his shot — on his 22nd birthday, no less.

“Of course I want us to do our best possible, and that would've been getting in the end zone,” Sciba said. “So I was obviously cheering for that. But I was just staying ready in case my number was called, and it was. And luckily I made it.”

Louisville (3-2, 1-1) got a final drive with no timeouts, but the Cardinals’ desperate, lateral-filled play never got across midfield before Wake Forest’s Rondell Bothroyd recovered the loose ball to end it.

Malik Cunningham had a big day for the Cardinals, throwing for 332 yards and two scores while running for two additional TDs. Louisville rallied from a 27-17 deficit entering the fourth quarter and 34-27 late, with Cunningham making his biggest throw in a frenetic final few minutes that had seen Wake Forest take a 34-27 lead on Hartman's 7-yard throw to A.T. Perry with 3:52 left.

Cunningham went over the middle to Tyler Harrell, who turned the corner and down the left sideline, breaking away from four black jerseys in pursuit for a 75-yard touchdown that tied the game at 34 with 3:01 left.

“We made some plays," Louisville coach Scott Satterfield said. "We still left some plays out there on the field."

Louisville: The Cardinals hadn't lost since the season opener against Mississippi and were coming off a win at Florida State to open league play. They had won the past two meetings in the series, including a 62-59 shootout here two years ago against a 5-0 Wake Forest team. Cunningham helped Louisville to 540 total yards, but the Cardinals burned through their timeouts on Wake Forest's final drive and didn't have much of a chance to respond to Sciba's winner.

Wake Forest: The Demon Deacons hopped into the AP Top 25 poll after a fourth 4-0 start in six seasons, and they entered October as the only team with multiple league wins. This marks Wake Forest's first 3-0 start in league play since 2011, putting them atop the league's shaken-up Atlantic Division race now that six-time reigning league champion Clemson has an early loss and No. 23 North Carolina State is the league's highest-ranked team.

There was a critical sequence right before halftime that is sure to remain a topic of conversation for the Cardinals.

Facing a third-and-goal from the 1-yard line with 4 seconds left, Wake Forest's Christian Beal-Smith ran for no gain. Louisville's sideline began celebrating and heading toward the locker room thinking the half was over, but officials ruled Wake Forest had called timeout with 1 second left.

That stood on review, and Sciba kicked a 20-yard field goal for the 20-17 halftime lead. That had Satterfield shrugging his arms in frustration as he headed toward the tunnel.

“That was unfortunate,” Satterfield said. “I hate that. We'll go back and look at it. But even at that, we had opportunities and chances to make plays.”

“Sometimes luck helps,” he said. "And you look back, those three points were as important as the last three points.”

The Demon Deacons keep winning, and that should keep them at least holding their position if not inching up the rankings.

Louisville: The Cardinals return home to face Virginia next Saturday in a cross-divisional league matchup.

Wake Forest: The Demon Deacons stay in division play when they visit Syracuse next Saturday.