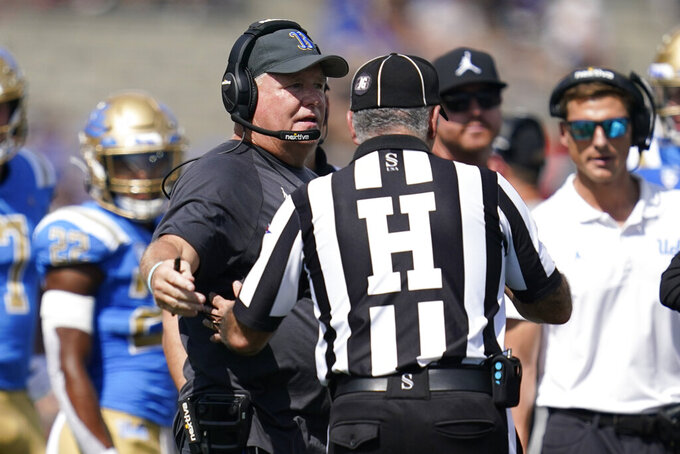 UCLA head coach Chip Kelly talks with an official during the first half of an NCAA college football game against Utah in Pasadena, Calif., Saturday, Oct. 8, 2022. (AP Photo/Ashley Landis)

Never have the stakes been this high.

No. 9 UCLA plays at No. 10 Oregon this Saturday in a game that will likely narrow the Pac-12's College Football Playoff chances to two teams.

Kelly lost the first two games against Oregon, the team he led to the 2011 BCS national championship game, but takes a much better team with him to Autzen Stadium this year.

“It’s always special going back there, it’s a special place in my life and there’s a lot of great people there that had a profound impact on my life,” said Kelly, Oregon's coach from 2009-12. “But I’m not playing the game. We’re totally focused.”

The Pac-12′s first top-10 matchup since 2018 will keep one Pac-12 team alive in the CFP push and likely eliminate the other.

UCLA (6-0, 3-0 Pac-12) is the conference's lone undefeated team and is coming off a bye after beating No. 15 Utah. Keep their roll going and the Bruins could work their way up to a top-four spot in the CFP.

The Ducks (5-1, 3-0) were crushed 49-3 by top-ranked Georgia in their opener, but have scored at least 40 points in five straight games since. Oregon would have to win out and hope a one-loss Pac-12 team will be good enough to get into the CFP.

No. 12 Southern California also would have to win out to hopefully get a playoff look.

No. 8 TCU at No. 17 Kansas State. The Big 12's best defense faces its best offense with first place on the line.

TCU, picked to finish seventh in the Big 12 preseason poll, is the conference's lone undefeated team remaining after rallying to beat No. 11 Oklahoma State 43-40 in double overtime last week.

Kansas State, picked fifth in the preseason poll, is the only other Big 12 team still undefeated in conference play after grinding out a 10-9 win over Iowa State.

Dorian Thompson-Robinson, UCLA. USC's Caleb Williams is getting the most Heisman hype out West, but DTR has been putting up big numbers for the only Pac-12 team that hasn't lost.

Thompson-Robinson has thrown for 1,510 yards and 15 touchdowns with two interceptions, adding 231 yards and four more scores rushing. If the Bruins make it to the CFP, he will likely be in the Heisman conversation.

1 — Sack allowed by Oregon, fewest in the FBS.

16 — Receptions by Utah's Dalton Kincaid against USC last week, most by a tight end since Northwestern’s Jon Harvey had 17 against Michigan in 1982.

40 — Consecutive top-5 appearances in the AP Top 25 by Alabama before dropping to No. 6 this week.

551 — Total yards per game by Tennessee, tops in the FBS.

No. 6 Alabama at No. 24 Mississippi State. The poor Bulldogs seem to have a knack for playing Alabama right after a Crimson Tide loss. It hasn't gone well.

Alabama has played Mississippi State coming off a loss three times since 2019, winning those games by a combined 71 points.

The Bulldogs also will be playing with heavy hearts following the death of freshman offensive lineman Sam Westmoreland earlier this week.