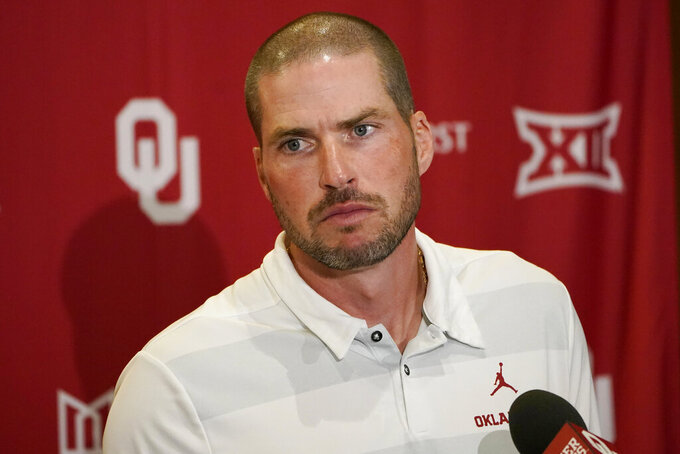 LOS ANGELES (AP) — If Alex Grinch’s Oklahoma defense had been able to make a few more stops, he might not be the new coordinator at Southern California under ex-Sooners coach Lincoln Riley.

Oklahoma couldn’t hold onto a nine-point lead going into the fourth quarter against Oklahoma State, allowing 14 points in the fourth quarter and losing 37-33 on Nov. 27. That defeat created the opening that allowed the Trojans to lure Riley away less than 24 hours later.

The irony of the situation isn’t lost on Grinch, who went from lamenting a rivalry loss he is “still not over” to expressing his delight at teaming up with Riley once again.

“To be under elite leadership at elite institutions, now all of a sudden that’s an opportunity that you don’t want to pass up," Grinch said. “So having the opportunity to work for coach Riley at the University of Oklahoma, now another tremendous opportunity at another elite place in USC, so very excited to do it.”

For all the focus on Riley’s high-scoring offense, especially now that he has quarterback Caleb Williams again after a dynamic freshman season working together at Oklahoma, Grinch’s efforts to address a flailing defense should have a bigger say on whether the Trojans return to their traditional spot in the top echelon of college football.

USC was tied for 103rd nationally in points allowed, giving up at least 31 in eight games. The pass defense surrendered 8.8 yards per attempt, ninth-worst in the FBS, making a run defense that allowed 4.55 yards per carry seem resolute in comparison.

Grinch got a look at what he’s inheriting during the week of preparations leading up to USC’s 24-14 loss to California in a game that was postposed to Dec. 4 because of COVID-19. Grinch insists it was “a minimal evaluation” created by “a unique opportunity just from a timing standpoint.”

However, subsequent activity in the transfer portal might reflect how that initial impression went, bolstering the defense with six players from other Power 5 schools — two each on the defensive line, at linebacker, and at cornerback.

“Sometimes it’s easy to identify those things,” Grinch said. “But most importantly, we got to enhance those individuals in our program right now. And so there’s a lot to be done in a short period of time. ... A lot of guys are looking to compete, which is a good starting point.”

In his first job as a defensive coordinator at Washington State in 2015, Grinch shaved off nearly 11 points per game allowed compared to the previous season. By his third year, the Cougars were tied for the Pac-12 lead in takeaways.

There were similar improvements during his three seasons at Oklahoma.

Outside linebackers and slot cornerbacks coach Roy Manning is paired with Grinch for the third time at USC. Manning cites Grinch’s ability to connect with players as one of his main strengths.

“He is wired, what I would say, the right way in terms of a person that players would want to be led by or gravitate toward,” Manning said.

Defensive line coach Shaun Nua, who is collaborating with Grinch for the first time after spending the previous three seasons at Michigan, said it helps that the 41-year-old’s energy carries over into his approach to the game.

“It’s an attack scheme, and attack, attack, attack. Rip and run, so it’s a great scheme,” Nua said. “We love it. The players are gonna learn to love it. What better way to do it than just attacking, so simple as that.”