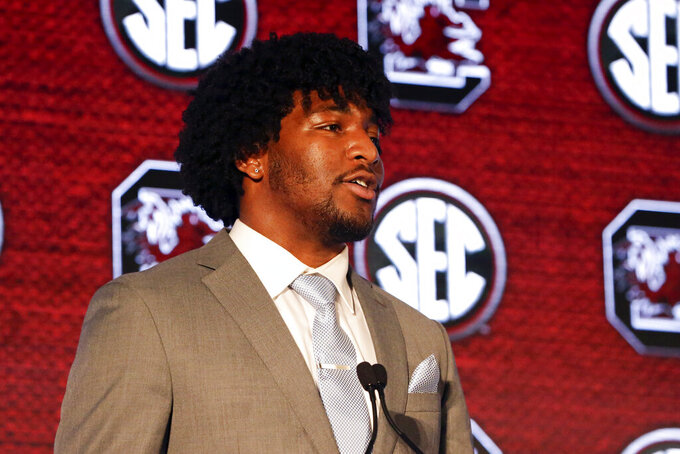 FILE - South Carolina's Kingsley Enagbare speaks to reporters during the NCAA college football Southeastern Conference Media Days in hoover, Ala., in this Monday, July 19, 2021, file photo. First-year South Carolina coach Shane Beamer believes is new team is closer to the dominance it showed a decade ago than the way it performed the past couple of seasons. “Everyday he's bringing high energy,” Enagbare said. “Just the way he speaks, he speaks confidence and positive affirmation. That's definitely been important to the transition.” (AP Photo/Butch Dill, File)

COLUMBIA, S.C. (AP) — First-year South Carolina coach Shane Beamer believes is new team is closer to the dominance it showed a decade ago than the way it performed the past couple of seasons.

Beamer, the son of Virginia Tech coaching great Frank Beamer, got his first head-coaching job with the Gamecocks last December. He was brought in to rejuvenate a program that stumbled badly the last few seasons under Will Muschamp.

Beamer believes the Gamecocks can be the program they were in 2010 when they won their only Southeastern Conference East Division title under Steve Spurrier. Beamer was a defensive assistant in charge of recruiting on that squad.

“We’re not talking about something that was 40 years ago. It was recently done here in South Carolina,” Beamer said. “We’re not far from getting back there and doing it again.”

It likely won't happen overnight. South Carolina had lost 13 of its past 16 games with Muschamp getting dismissed last November. Interim coach Mike Bobo oversaw an 0-4 stretch and, after initially accepting Beamer's offer to be offensive coordinator, left for a similar spot at Auburn.

The players' acceptance of Beamer boosted the new coach's hopes of making positive strides sooner rather than later, the 44-year-old said.

South Carolina defensive lineman J.J. Enagbare, who tied for third in the SEC with six sacks last season, said Beamer's personality and positive vibes won over players who were unsure where to turn after the struggles of last year.

Beamer has worked for some of the greats including his father and more recently Georgia's Kirby Smart and Oklahoma's Lincoln Riley. South Carolina's coach has certainly learned keep things lively and not limit what his team might accomplish this fall.

“I am 100 percent convinced that the best days of South Carolina football are right in front of us, and I couldn’t more excited about that,” he said.

Some other things to look for this season at South Carolina

Beamer's biggest early tasks was hiring and keeping a staff. He had to hire 14 assistants for his 10-man on field staff, including four openings created when previously hired coaches left for other jobs. The only holdover on staff is outside linebackers-defensive ends coach Mike Peterson, in his sixth season with the Gamecocks.

South Carolina will be led by an inexperienced quarterback no matter who opens the season. Second-year passer Luke Doty, expected to win the starting job, has a sprained foot and could miss the opener on Sept. 4. Receiver Dakereon Joyner, a quarterback in high school, could get some reps with St. Francis (Pennsylvania) transfer quarterback Jason Brown and freshman Colten Gauthier the other options.

The Gamecocks might keep emphasize their ground game to start the season. Kevin Harris, who led the SEC in rushing with 1,138 yards, is South Carolina's first option. His 15 touchdowns were second in the league behind Alabama's Najee Harris. After Kevin Harris is freshman Marshawn Lloyd, a highly regarded speedster who missed last year due to a ligament tear. Lloyd said he is 100% and can do all that he did before.

If South Carolina hopes to improve defensively, it will lean heavily on its ends. J.J. Enagbare's six sacks in just eight games earned him a spot on the all-SEC first team. Aaron Sterling returns after an injury-plagued season. He had 10 tackles for loss in 2019. And second-year player Jordan Burch, the highest rated signee since Jadeveon Clowney in 2011, expects to play a bigger role after an up-and-down first season.

South Carolina needs to win early because the back half of its schedule is a challenging. The Gamecocks open at home (they plan for a full stadium and a pre-pandemic tailgate experience) against Eastern Illinois on Sept. 4. Their final five games include road contests at Texas A&M and Missouri and home games with Florida, Auburn and Clemson.