Bennett running away with starting QB job for No. 1 Georgia 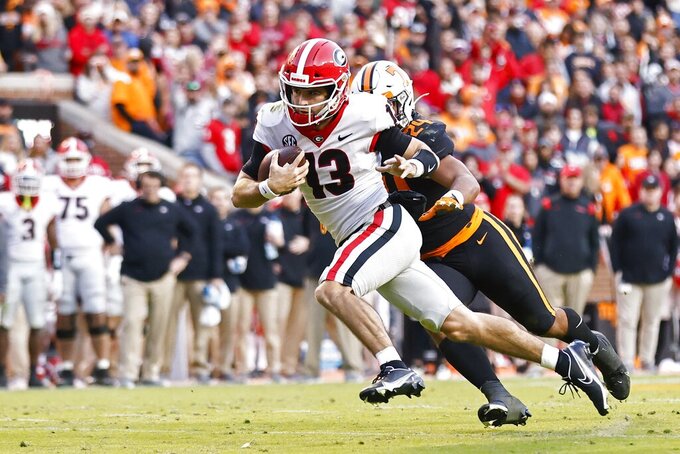 ATHENS, Ga. (AP) — Against all odds, Stetson Bennett is running away with No. 1 Georgia's quarterback job.

No better than third string on Georgia's depth chart entering the season, Bennett took advantage of an injury to JT Daniels to grab the job. His legs are a big reason he has kept the job.

Bennett, a former walk-on, has avoided mistakes when passing the ball and has taken advantage of his running ability to help the Bulldogs (10-0, 8-0 Southeastern Conference) remain atop the AP Top 25 and earn a spot in the SEC championship game on Dec. 4.

Georgia plays Charleston Southern on Saturday in its final home game of the season.

Some observers believe Daniels would provide Georgia’s best hope for winning the SEC and national championships. Coach Kirby Smart is basing his faith in Bennett on what he has seen in practice and in games.

Following the win over Tennessee, Smart said “I’m not going to overthink it with Stetson. We’re trying to go game by game to get him better.”

Bennett has been solid, if not spectacular, as a passer. His edge is his running ability.

“His legs have played a big part in his success,” Smart said after Bennett ran for 40 yards and a touchdown in last week's 41-17 win at Tennessee. Bennett completed 17 of 29 passes for 213 yards with a touchdown.

Bennett has rushed for 233 yards this season.

“Honestly, my dad has tried to get me to run more because I’ve always been pretty fast,” Bennett said.

Smart said Bennett's runs are “a new dynamic that our offense needs.”

Still, because Daniels opened the season as the starter, there was an ongoing expectation he would eventually overtake Bennett. Even as Georgia has only two regular-season games remaining, the quarterback questions continued on Monday.

Smart smiled when asked if Daniels will play against Charleston Southern.

Only two weeks ago, it appeared Georgia might be on the verge of another round of its quarterback derby.

After missing four games with a lat injury, Daniels returned to play a significant role in the Bulldogs' 43-6 win over Missouri. Bennett started but Daniels completed 7 of 11 passes for 82 yards with one touchdown and one interception.

The Missouri game could have been the first step to a quarterback rotation or a bid by Daniels to reclaim the starting job.

Instead, Daniels did not play against Tennessee.

As Bennett has solidified his role as the starter, Daniels has been working with the second-team offense.

“He goes out to practice and takes really quality reps,” Smart said of Daniels. “He takes ownership in those, and he watches Stetson's reps and goes over what he saw on defense.”

Smart said Daniels has "done a really good job handling that and continuing to work to get better. ... Both those guys are playing well to me, right now.”

Bennett has 15 touchdown passes, including five in a 56-7 win over UAB, with only four interceptions. He has completed 65.1% of his passes for 1,625 yards, helping to keep Georgia's offense balanced.

In four games, including three starts, Daniels has completed 74.4% of his passes for 649 yards with six touchdowns and three interceptions.

Bennett has given Smart and his staff a role model for any walk-on who has been told he won't have a chance against more highly recruited players.

“I’m so proud of what he’s been through,” Smart said. “For a young man that was a 3 coming out of spring, a 3 going into fall camp, a 3 coming out of fall camp. What does it say about his character that he stuck around and he kept working to get better? That’s what you’re supposed to do in life, overcome hurdles and obstacles, and he’s done that.”