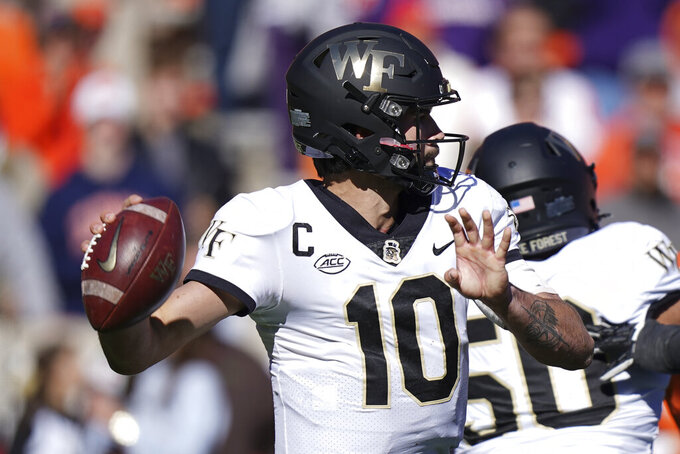 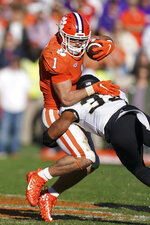 CLEMSON, S.C. (AP) — At last, Clemson looked like the powerhouse it was supposed to be this season.

Kobe Pace ran for a career-high 191 yards and two touchdowns as the Tigers won their 13th straight over No. 13 Wake Forest, delaying the Demon Deacons' run to the ACC Atlantic title with a 48-27 victory Saturday.

Will Shipley, with 112 yards, joined Pace in surpassing the 100-yard mark on the ground and had two TD runs. Shipley also threw a 2-yard jump pass TD to Davis Allen.

“For us, offensively, it's our best game of the year,” offensive coordinator Tony Elliott said.

It sure took a while for the Tigers (8-3, 6-2 Atlantic Coast Conference) to play up to their preseason billing. But everything clicked, like so many other times, against Wake Forest (9-2, 6-1), which has not won at Death Valley since 1998.

“We already knew we had it in us,” said Pace, a sophomore. “It was just the right time to pull it out.”

Clemson, which won its 34th straight at home, also kept its hopes of a seventh straight trip to the ACC title game alive with the stunning rout of Wake Forest (9-2, 6-1). It was the Tigers' first win over a ranked opponent in four tries this season and the most points it had scored against a Power Five team.

The Demon Deacons entered the game averaging 44.7 points and 498 yards a game. They left with a season low in points and had only 36 yards rushing.

With time running out, chants of “Over-Rated,” rang out through Death Valley. Fans filled the field at the end, the school reinstating its long-held tradition it first suspended in 2020 because of the pandemic.

Still, Wake Forest remains in the divisional driver's seat and can make its first championship game appearance in 15 years by beating Boston College next Saturday.

“You tell me we're 9-2 and going to Boston College playing for an ACC championship,” Demon Deacons quarterback Sam Hartman said. “I can't tell you I wouldn't be excited about it.”

For the Tigers to reach the title game, they would need Wake Forest to lose to BC and have No. 25 North Carolina State lose one of its final two games.

The Tigers' defense, the team's lifeline while the offense struggled at times this season, set the tone. Hartman was sacked seven times and threw an interception. The Deacons also fumbled twice, both leading to Clemson touchdowns. Hartman finished with 312 yards and a fourth-quarter touchdown with Wake trailing by 22 points.

Clemson put things away in the third quarter on Pace's 8-yard touchdown run and a 58-yard pass from D.J. Uiagalelei to Beaux Collins to take a 31-13 lead.

“That was the game right there,” Hartman said.

Wake Forest: Clemson must live in the Demon Deacons' heads. With a title on the line and having their best chance at ending an embarrassing losing streak, they looked nervous and unprepared. The Deacons must straighten out their mindset quickly to play at Boston College and clinch the ACC Atlantic.

Clemson: The Tigers finally looked like the team most expected when they were voted No. 3 in the preseason Top 25 and the clear favorite to win their seventh straight title. It can still happen if the chips fall Clemson's way.

Wake Forest will drop a bit in the rankings with its uninspired showing at Clemson. Expect Clemson to re-enter the poll — it dropped out in September after a 27-21 OT loss at N.C. State — following its fourth consecutive victory.

Elliott said Shipley's jump pass was actually something the team had practiced for a while when two-time ACC player of the year Travis Etienne was part of the team the previous four seasons. Elliott said they hadn't found a spot to use it until know. “Etienne is going to be pretty upset,” Elliott said, laughing.