Fickell wants focus of No. 7 Bearcats on Murray State 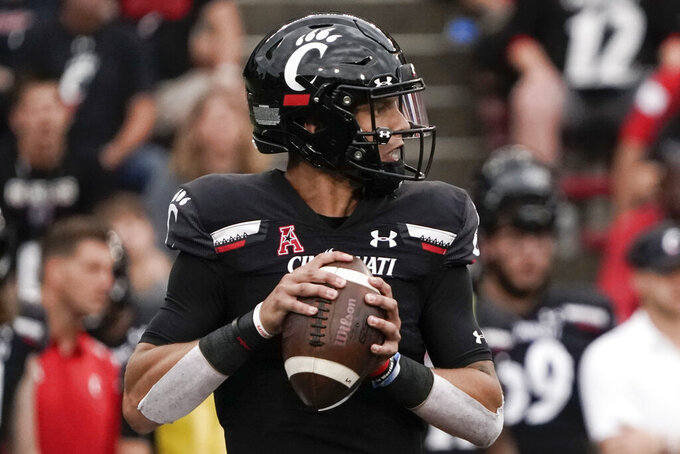 Cincinnati quarterback Desmond Ridder drops back for a pass during the second half of an NCAA college football game against Miami (Ohio), Saturday, Sept. 4, 2021, in Cincinnati. (AP Photo/Jeff Dean)

But that is becoming more difficult with all the buzz surrounding the Bearcats program, including reports Cincinnati could get an invitation to join the Big 12.

“That’s the biggest thing for us each and every week, can we quiet the noise,” Fickell said. “We need to take nothing for granted and leave nothing to chance.”

The No. 7 Bearcats rolled to a 49-14 win over rival Miami (Ohio) in their season opener. On Saturday, they face the Racers, a member of the Ohio Valley Conference, at home. Ahead lie trips to Indiana and No. 8 Notre Dame.

Cincinnati also is a likely expansion candidate for the Big 12 along with BYU, Central Florida and Houston as the league prepares for the departures of Texas and Oklahoma. That buzz could be another distraction for the Bearcats that Fickell wants to avoid.

“It has no bearing on what these guys will do this weekend,” he said. “I don’t think we can get too tied up in it as a team. As a program, as far as recruiting and things like that, any buzz like that we’re going to use.”

For now, the Bearcats are focused on Murray State, which rolled to a 35-0 win over Mississippi Valley in its opener.

The Racers and Bearcats each got big games from their quarterbacks last week.

Cincinnati QB Desmond Ridder completed 20 of 25 passes for 295 yards and four TDs last week, including an 81-yard touchdown to Tyler Scott on the second play from scrimmage. Ridder also had a rushing TD.

Murray State is picked to win the OVC for the first time since 1996. The Racers, who rushed for 307 yards last week, will try to control the game on the ground and keep Cincinnati’s high-powered offense, which produced 542 yards last week, on the sidelines.

It is the first meeting between the two schools.

Junior running back Jerome Ford, an Alabama transfer, is looking to be the Bearcats' feature back after being in a backup role much of last season. He had 12 carries in the win over Miami (Ohio) with 125 yards and a 21-yard TD run. Fickell wants to see him take on an even bigger role. “When he gets into that situation where he has to carry it 25 times a game, we’ll know more,” Fickell said. "From what we’ve seen, he’s in a really good place to help lead us to the things we want to do.”

Dean Hood is in his second season as head coach at Murray State. Under Hood, the Racers started 5-0 last spring, matching their best start in school history. Hood was an assistant coach at Kentucky after eight years as head coach at Eastern Kentucky.

Cincinnati has won 21 straight at Nippert Stadium, going undefeated at home in three straight seasons for the first time in history. The Bearcats’ last loss at home was on Nov. 10, 2017, when they fell to Temple 35-24. The Bearcats began the season among only four FBS teams to go undefeated at home the last two seasons. Ohio State, Clemson and Notre Dame were the others.