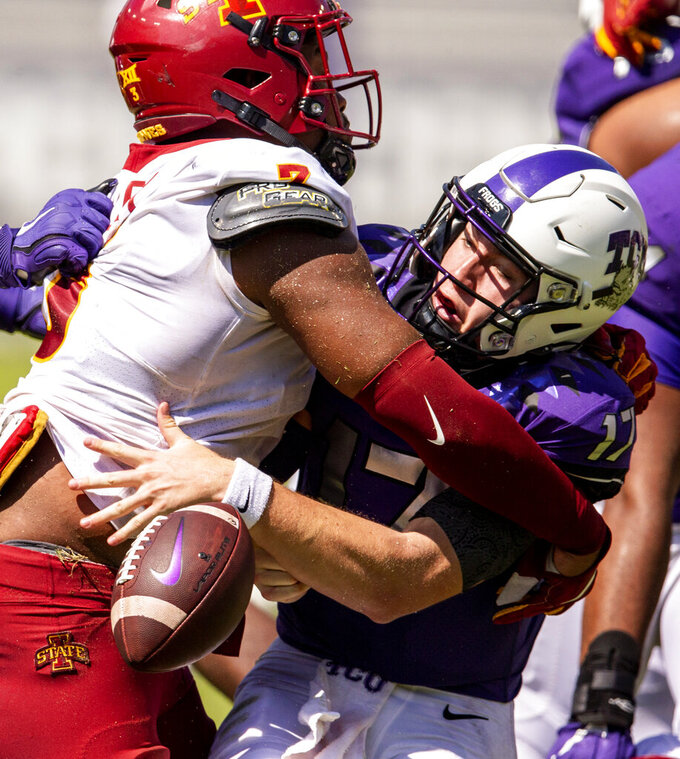 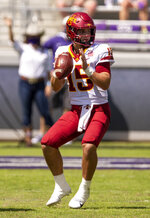 FORT WORTH, Texas (AP) — Breece Hall ran for 154 yards and three touchdowns, JaQuan Bailey had 3 1/2 sacks to become Iowa State’s career leader and the Cyclones opened Big 12 play with a 37-34 win at TCU on Saturday.

Bailey’s strip sack and recovered fumble just before halftime set up Brock Purdy’s 17-yard touchdown pass to Darren Wilson for the Cyclones (1-1), who bounced back from a 17-point home loss to Louisiana-Lafayette in their opener two weeks ago.

“The biggest thing that you saw ... we played in a really good rhythm,” Iowa State coach Matt Campbell said. “Now unfortunately, there’s still a lot out there for this team to continue to grow. We left a lot out there again in terms of putting the nail in the coffin, finishing the game and doing some things we need to do to be better. But I thought there it was a warrior’s effort from our kids.”

Max Duggan threw three touchdowns after halftime for TCU, but linebacker Mike Rose made a diving interception — grabbing the ball only inches off the ground — with less than four minutes left. The pass went through the hands and off the knee of Taye Barber, who had an earlier touchdown catch.

That set up a 32-yard TD run by Hall on third-and-2 with 2:54 left that made it 37-28. The sophomore ran basically untouched 75 yards to open the scoring in the second quarter, and had a 1-yard score earlier in the fourth when he leaped high in the air over the line and came down on his feet in the end zone.

“Well, I felt like it was a huge statement win, it gave us a lot of confidence. We really wanted to come and kind of bounce back,” Hall said.

Kene Nwangwu had a 49-yard touchdown on his only carry for the Cyclones.

“You can’t play our defense if you’re not going to be accountable with what you do. We were not accountable,” TCU coach Gary Patterson said. “We missed tackles, had the ball thrown over our head.”

The Horned Frogs played their opener in Patterson’s 20th season as head coach. Their scheduled nonconference game against SMU two weeks ago wasn’t played after a cluster of TCU players and support staff tested positive for COVID-19.

“It’s definitely different going straight into Big 12 play," running back Emari Demercado said. “You don’t have your games to get your kinks out."

TCU announced an attendance of 11,852, just under the limited 25% capacity for the game in the stadium that can hold about 48,000 fans. It was also the first game some donors could utilize the new luxury boxes and club seats that weren’t completed in the middle of last season, as had been planned.

Bailey, limited to four games last season because of a leg injury, broke a tie with Shawn Moorehead for the most sacks in Iowa State history. Bailey now has 22. “You're seeing a guy building," Campbell said. "A senior year, an opportunity of the work ethic that he’s put in. ... He's showing just how talented he truly is.”

Iowa State: Purdy, 15-9 as a starter in Big 12 games, finished 18-of-23 passing for 211 yards and one touchdown. But he also had a huge mistake right after halftime, when he slung the ball in the air while in the grasp of a defender. La’Kendrick Van Zandt caught it and went 21 yards for a TCU touchdown. It was ruled a fumble and not an interception since it was behind the line. “That’s like freshman me trying to make a play,” Purdy said

TCU: Duggan started TCU’s final 10 games last season, but was limited early in camp after a previously undetected heart issue was revealed in preseason testing. Matt Downing, who appeared in four games as a walk-on freshman at Georgia in 2018, made his TCU debut completing 11 of 21 passes for 159 yards a touchdown. But he had the lost fumble just before halftime. Duggan finished 16-of-19 for 241 yards, including a TD on the game’s final play. Patterson said the Frogs needed to get “a guy who could take off and scramble more.”

Iowa State: Home next Saturday against five-time defending Big 12 champion No. 3 Oklahoma, which is coming off a 38-35 home loss to Kansas State.

TCU: At No. 8 Texas next Saturday. The Frogs have won five of the last six games in the series.