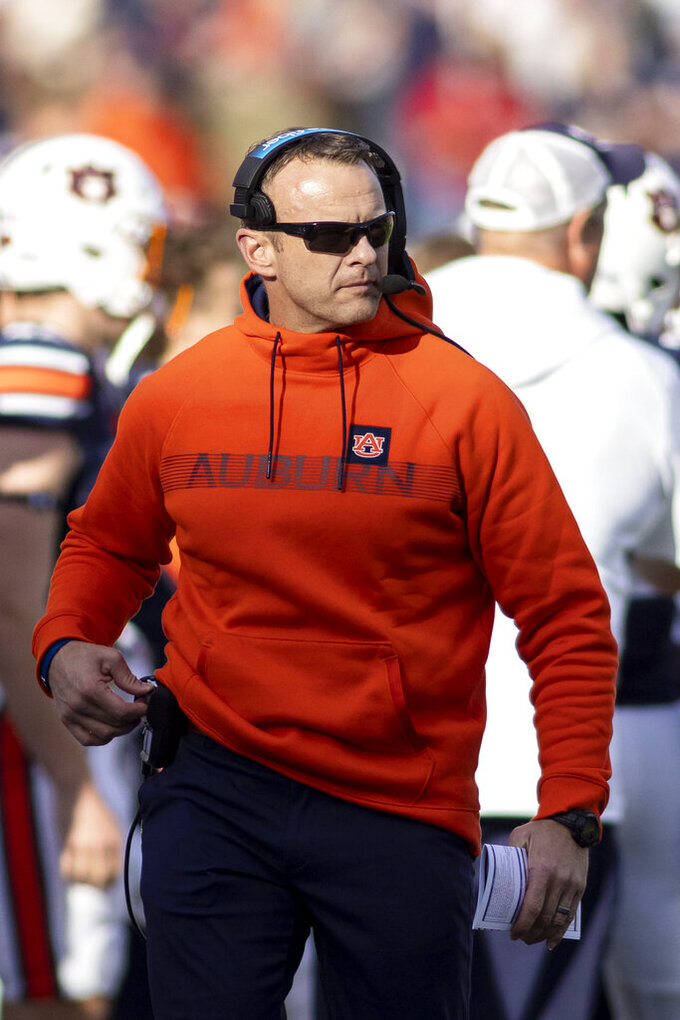 Auburn head coach Bryan Harsin paces the sidelines during the first half of an NCAA college football game against Alabama, Saturday, Nov. 27, 2021, in Auburn, Ala. (AP Photo/Vasha Hunt)

BIRMINGHAM, Ala. (AP) — Houston is trying to join the two other teams in program history to reach 12 wins in a season.

Auburn (6-6) is hoping to avoid a different kind of milestone in Tuesday's Birmingham Bowl at Protective Stadium, which opened in October a couple of hours from campus: ending a season with five straight losses for the first time in 71 years.

The 21st-ranked Cougars (11-2) had won 11 straight before losing to fourth-ranked and playoff-bound Cincinnati 35-20 in the American Athletic Conference championship game. Now, they get a shot at a team from the powerhouse Southeastern Conference and an opportunity to win a dozen games or more like the 2011 and 2015 teams, both of which won 13.

"I believe this team is ready and we’ve got to get the bad taste out of our mouth from the championship.”

Auburn dropped four in a row to end the debut seasons of coaches Ralph “Shug” Jordan (1951) and his successor Doug Barfield (1976). The 1950 team led by Earl Brown went 0-10, the last to drop five straight to close a season.

The Tigers will be without at least seven players, mostly because of opt-outs by NFL draft prospects or transfers.

“The postseason is a privilege,” Harsin said. “Everybody's situation is different. It's about the guys that are in that room that are preparing to go play this game.”

Harsin declined to comment Monday on whether any players would miss the game because of COVID-19 protocols but said nothing had changed in the last couple of days.

Houston coach Dana Holgorsen was asked about avoiding COVID-19 troubles this postseason after other teams had to pull out of bowl games.

“I feel good,” Holgorsen said, pointing to Anderson and quarterback Clayton Tune. “I don’t know, how do you guys feel? We feel good and we’re ready to go play a football game.”

Both teams are trying to snap bowl losing streaks. The Cougars have lost four straight postseason games and Auburn has dropped two in a row.

Both teams have lost some key players, including their best cornerbacks, ahead of the game. Auburn cornerback Roger McCreary and Houston All-American cornerback and return man Marcus Jones have opted out to prepare for the NFL draft. Tigers linebacker Zakoby McClain and offensive tackle Brodarious Hamm have also opted out while several players have transferred, including injured quarterback Bo Nix (Oregon) and starting offensive lineman TaShawn Manning (Kentucky). Houston defensive tackle Logan Hall also opted out.

Houston running back Alton McCaskill was the American Athletic Conference rookie of the year this season. Auburn back Tank Bigsby got that honor in the Southeastern Conference last season. McCaskill's 16 rushing touchdowns is second in program history and his 17 total scores are tied for most by a freshman with Bryce Beall (2008).

Bigsby has run for 1,003 yards and 10 touchdowns as a sophomore.

Houston's last game against an SEC team was a 34-0 win over Vanderbilt on Oct. 31, 2015. The Cougars are 5-4 against the SEC since 1999, with three wins over Mississippi State and a victory over LSU.

The Cougars will once again be playing in a hostile environment following the Cincinnati game.

“It’s no different than what we had to do for the championship game," Holgorsen said. "If we don’t like it, then we need to win more games.

“It doesn’t matter who we play or where we’re playing at.”