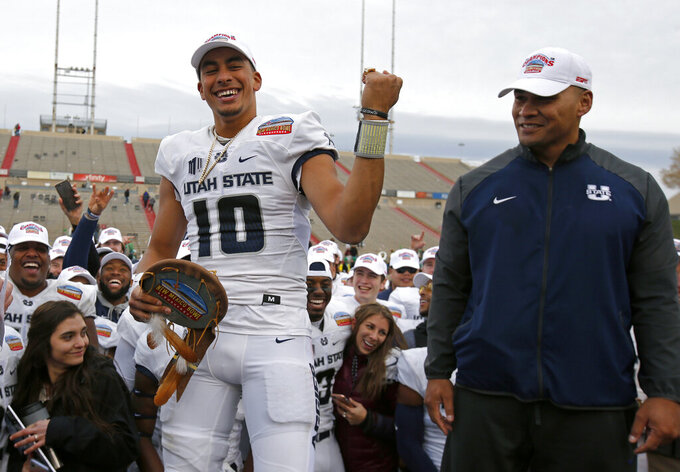 He's looking to toss a few more in his return trip — and to finish with a different result.

Love looks to begin his Heisman push Friday night when the Aggies open the season against a Demon Deacons team coming off its third straight bowl victory.

"I'm excited to go back down there and show them what we're really all about now," Love said. "It's going to be a different story this time when we go down there."

Love caught the attention of NFL draft gurus last season by throwing for school records of 3,567 yards and 32 touchdowns with only six interceptions and leading Utah State to an 11-2 record, a No. 22 final ranking and a rout of North Texas in the New Mexico Bowl. The school has launched a Heisman campaign for its quarterback — complete with packets of candy hearts stamped with his name and number, playing off his last name.

Two years ago, Love was merely a little-known freshman who was inserted into the second half of a blowout in Winston-Salem. He threw a 77-yard scoring pass to Gerold Bright for the Aggies' only touchdown of a 46-10 loss.

So that's one big thing the Demon Deacons have going for them — they know firsthand how capable Love can be, and sixth-year coach Dave Clawson says Utah State "has certainly earned our respect."

"This is the toughest opener we have had since I have been here, in terms of the quality of the opponent," he said.

Some other things to know about the Utah State-Wake Forest opener:

Wake Forest enters this season as an under-the-radar pick to challenge for second place in the ACC's Atlantic Division behind reigning national champion Clemson, if not push the perennial power Tigers. Clawson says this team has the maturity and experience to handle the challenge of Love and the Aggies in the opener.

"I think where we were before, when we were really young, you almost wanted to be able to make some mistakes and still be able to find a way to win," Clawson said. "You would try to play a lot of players. Where we are now, I think opening with a game like this is something that we can handle. The focus of preseason camp is much more intense and much more focused when you open with a team that won 11 games."

Jamie Newman will begin this season the same way he ended the last one — as Wake Forest's starting quarterback. Newman and Sam Hartman spent the preseason battling for the job both of them held at times in 2018. Hartman started the first nine games last season before suffering a season-ending leg injury, and Newman took over and led the Demon Deacons to a road upset of North Carolina State, a rout of rival Duke and a victory over Memphis in the Birmingham Bowl.

Gary Andersen is back for a second stint as the Aggies' head coach. Andersen, who coached Utah State from 2009-12 before taking the Wisconsin job, takes over for Matt Wells, who left for Texas Tech. He went 26-24 during his first run with the Aggies.

The Demon Deacons open with three straight Friday night games, visiting Rice next week and playing host to North Carolina on Sept. 13 in a game that won't count in the ACC standings. ... This is the third game in the series and the home teams won the first two, with Utah State claiming a 36-24 win in Clawson's first season in 2014 and Wake Forest rolling two years ago. ... Wake Forest has won nine straight home openers. ... Utah State has averaged 42.2 points in Love's 19 career starts.