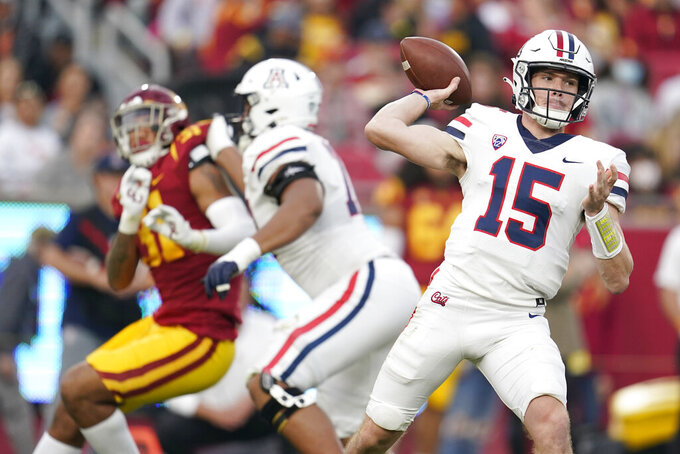 Arizona quarterback Will Plummer (15) looks to throw during the first half of an NCAA college football game against Southern California, Saturday, Oct. 30, 2021, in Los Angeles. (AP Photo/Marcio Jose Sanchez)

LOS ANGELES (AP) — Drake London briefly broke into tears while sitting on a cart with an air cast around his right leg as he left the Coliseum field, perhaps for the final time.

If one of the best receivers in Southern California’s football history has played his last collegiate game, at least his final play was a touchdown catch during a win for the Trojans.

London caught nine passes for 81 yards and two scores before leaving with a serious right ankle injury late in the first half, dampening USC’s 41-34 victory over winless Arizona on Saturday night.

Keaontay Ingram rushed for a career-high 204 yards and a touchdown, and Gary Bryant Jr. caught two TD passes as the Trojans (4-4, 3-3 Pac-12) snapped their three-game home losing streak. They also extended the Wildcats' epic skid to 20 games, the longest active slide in the Football Bowl Subdivision and the longest in Pac-12 history.

But London injured his right leg while making his second TD catch on a 6-yard pass from Jaxson Dart. London, who set an FBS record with 79 catches in his team's first seven games this season, returned to the USC bench in the second half with a cast on his leg.

Interim coach Donte Williams said “there's a concern” the ankle injury will be season-ending for London, a prime NFL prospect.

“Seeing a player like him go down, the whole team felt it,” Ingram said.

Kedon Slovis and Dart threw two touchdown passes apiece while splitting time behind center for the Trojans in a sharing plan set up by Williams, who apparently didn't tell Slovis or most of the rest of the USC offense about his intentions before the game.

“It’s tough,” said Slovis, a two-year starter and the first-team All-Pac-12 quarterback last season. “You want to to be in, and you think you give your team the best chance to win. Not to take away from Jaxson. He’s a great player, but you want to know why.”

Anthony Pandy returned an interception 37 yards for a touchdown on a pass by Slovis early in the second half for Arizona (0-8, 0-5), which lost to USC for the ninth straight time despite a strong rally from a 21-point halftime deficit.

“This was another great example of being there, but not over the hump,” Arizona rookie head coach Jedd Fisch said. “It's too bad we didn't put the first half of (last week's loss to) Washington and the second half of USC together. We need to continue to battle, and I think we're taking steps.”

Will Plummer, who passed for 264 yards, rushed for a 16-yard TD with 12:50 to play. Arizona hit two field goals later in the fourth quarter, but Calen Bullock recovered an onside kick with 1:25 left to seal USC's win.

Tayvian Cunningham caught an early 73-yard touchdown pass for the Wildcats, who scored at least 20 points for the first time in 11 games since last Nov. 21.

“This is what you dream of — playing in the Coliseum against USC,” said Plummer, who was sacked four times. “ I think everybody understood the assignment in front of us. We just fell short.”

After Ingram scored on USC's opening drive, Cunningham caught his long TD pass from Jamarye Joiner, the Arizona receiver who moonlights as a wildcat quarterback.

The Trojans came right back with Slovis' 62-yard TD throw to Bryant. Slovis went 9 of 11 for 145 yards in the first quarter before he was abruptly replaced by Dart, who immediately led a 96-yard drive capped by a short TD pass to London.

After London got hurt, Slovis added another TD pass to Bryant 32 seconds before halftime.

Slovis passed for 204 yards, while Dart passed for 109 yards in his first appearance since his impressive USC debut last month at Washington State. Dart replaced an injured Slovis in Pullman and passed for 391 yards and four touchdowns before getting injured himself and missing the next month.

Williams refused to say whether he’ll continue to split playing time between his quarterbacks, instead emphasizing the Trojans’ 234-yard rushing performance led by Texas transfer Ingram.

“We’re fortunate to have big-time backs here,” Williams said. “We’re in a good situation with running backs we can depend on.”

Arizona: This one was close, and signs of progress are there. The Wildcats posted their second-biggest point total during this losing streak. Plummer looked composed during the comeback. The defense tightened up in the second half. Matchups with Cal and Washington State in November look downright winnable.

USC: Beating a winless team by seven points isn't typically a cause for celebration at this school. And if London has played his final collegiate snap, the Trojans will lose one of the school's best-ever receivers before he racked up the season-long accomplishments that would truly reflect his dominance. It would be yet another setback for a team trying to put together a decent finish before its new head coach is named.

USC: At Arizona State next Saturday.