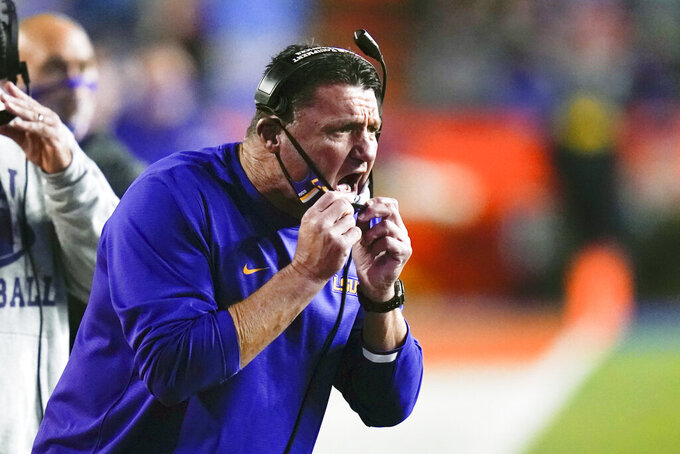 FILE - In this Saturday, Dec. 12, 2020 file photo, LSU coach Ed Orgeron shouts instructions to players on the field during the first half of the team's NCAA college football game against Florida in Gainesville, Fla. LSU coach Ed Orgeron has hired Jake Peetz as his offensive coordinator and DJ Mangas as passing game coordinator, luring both coaches away from the NFL's Carolina Panthers. Peetz and Mangas, whose hirings were announced Wednesday, Jan. 6, 2021 both worked as offensive assistants alongside Panthers offensive coordinator and former LSU passing game coordinator Joe Brady.(AP Photo/John Raoux, File)

This season, Peetz, who has spent 10 seasons in the NFL, served as the Panthers' quarterbacks coach. Mangas was an assistant this season to Brady, with whom he also worked at LSU in 2019, when he served as an offensive analyst.

“Both Jake and DJ come highly recommended from one of the premier and innovative offensive coaches in the game in Joe Brady,” Orgeron said. “Jake brings 10 years of NFL experience with him to our staff. He spent a season coaching alongside and learning from Joe (Brady), so we couldn’t be more excited about Jake joining our staff. His knowledge of football, combined with the players we have on our roster, will make for a dynamic offense for LSU in 2021."

Orgeron said Mangas “did a tremendous job in his one season with us in 2019 working alongside Joe to produce one of the most explosive and productive offenses in college football history.”

The hirings come on the heels of considerable turnover on Orgeron's staff after LSU finished the season 5-5 and elected to self-impose a one-year bowl ban because of findings in an NCAA probe into players or their families receiving improper benefits dating back before Orgeron took over as the permanent head coach after the 2016 season.

Offense was not entirely a problem area for LSU, considering the challenges the unit dealt with before and during the season. Top receiver Ja'Marr Chase opted out before the season and receiver Terrace Marshall Jr. and prized freshman tight end Arik Gilbert also opted out during the season.

Quarterback Myles Brennan, the season opening starter and by far the most experienced at his position the team, missed the final seven games with an abdomen injury and LSU had to experiment with two freshmen — TJ Finley and Max Johnson — in Brennan's place.

Still, LSU ranked fourth in the Southeastern Conference in yards per game (312.2) and total touchdowns (24) passing. A bigger problem was a completion rate of 58.7%, which ranked near the bottom of the conference.

Peetz, a former Nebraska defensive back, has spent two seasons with Carolina and before that was with the Oakland Raiders (2015-17), Washington Redskins (2014) and Jacksonville Jaguars (2012). Peetz also spent the 2013 and 2018 at Alabama as an offensive analyst.

Mangas played quarterback and receiver at William & Mary, where he later served as running backs coach from 2014-16 before being elevated to offensive coordinator for two years from 2017-18.

“I’m beyond excited for the opportunity to be back in Baton Rouge and coaching for LSU and Coach Orgeron,” Mangas said. “It fires me up to see the potential we have for the 2021 offense.”

The hirings are subject to approval from the LSU Board of Supervisors.