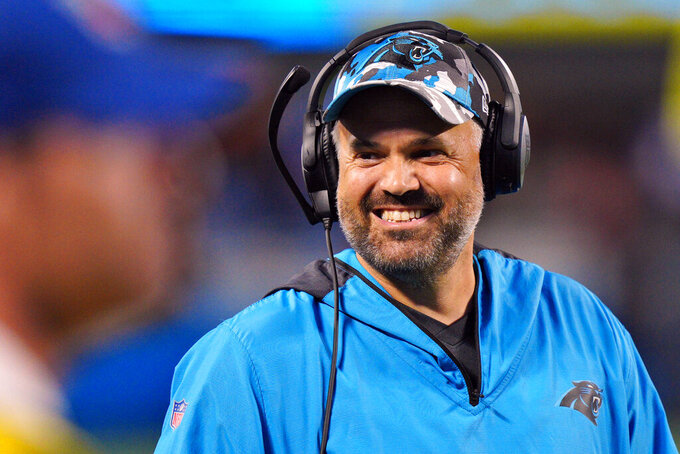 FILE - Carolina Panthers head coach Matt Rhule smiles during the first half of an NFL preseason football game against the Buffalo Bills on Friday, Aug. 26, 2022, in Charlotte, N.C. After six straight losing seasons and more than 20 years removed from its 1990s heyday, Nebraska is turning to Matt Rhule to rebuild its football program and make it competitive in the Big Ten Conference. (AP Photo/Jacob Kupferman, File)

After six straight losing seasons and more than 20 years removed from its 1990s heyday, Nebraska is turning to Matt Rhule to rebuild its football program and make it competitive in the Big Ten Conference.

Rhule signed an eight-year contract to be the Cornhuskers' next coach and will be introduced Monday at a news conference, the school announced Saturday.

The 47-year-old Rhule quickly turned around downtrodden programs at Temple and Baylor before leaving for the NFL to coach the Carolina Panthers. The Panthers fired him in October after he started his third season with four losses in five games.

“It is a tremendous honor to be chosen to lead the Nebraska football program,” Rhule said in a statement. “When you think of great, tradition-rich programs in college football, Nebraska is right at the top of the list. The fan base is second to none, and I consider it a privilege to have the opportunity to coach in Memorial Stadium on Tom Osborne Field. My family and I are so grateful to become a part of the Husker Family, and we can’t wait to get started.”

Rhule was 11-27 with Carolina and left with about $40 million remaining on the seven-year, guaranteed $62 million contract he signed in 2020. The contract made Rhule the sixth-highest paid coach in the NFL when he signed in 2020, according to Forbes.

Nebraska said it would release details of Rhule's contract on Monday.

“It is a privilege to welcome Coach Matt Rhule, his wife, Julie, and their family to Nebraska,” athletic director Trev Alberts said. “Coach Rhule has created a winning culture throughout his coaching career, and he will provide great leadership for the young men in our football program.

"Matt is detail-oriented, his teams are disciplined and play a physical brand of football. Matt also has the personality and relationship-building skills to build a great staff and excel in recruiting.”

About an hour after Rhule's hiring was announced, wide receiver Trey Palmer announced on Instagram that he would declare for the NFL draft. Palmer, who transferred from LSU after last season, had three 150-yard games this year and set the Huskers' single-season record with 1,043 yards.

The Huskers are among eight Football Bowl Subdivision programs with at least 900 wins, and they have won or shared five national championships. The last one came in 1997 under Hall of Fame coach Tom Osborne.

Five coaches have come and gone since then, most recently the quarterback of that '97 team, Scott Frost.

Alberts fired Frost on Sept. 11 after the Huskers opened 1-2, with losses to Northwestern in Ireland and to Georgia Southern at home. They were 3-6 under interim coach Mickey Joseph and finished the season 4-8 following a 24-17 win at Iowa on Friday.

Nebraska was 16-31 in four-plus seasons under Frost, never finishing higher than fifth in the Big Ten West or going to a bowl.

In four seasons at Temple, Rhule coached the Owls to 28 wins. That included 26 from 2014-16. Temple was 10-4 in 2015 and reached the American Athletic Conference’s inaugural championship game. In 2016, Rhule led the Owls to a 10-3 record and an AAC championship. The conference title was the first in 49 seasons for the Temple program, and the Owls reached bowl games in consecutive seasons for the first time in school history.

Rhule was named Baylor’s coach in December 2016 in the wake of an investigation that found the private Baptist university had not responded adequately to allegations of sexual assault by players, resulting in the firing of Art Briles.

Rhule’s trajectory was similar at Baylor, where he went from 1-11 in 2017 to 7-6 with a bowl game the next season. In his third and final season, Baylor was ranked in the top 10, played in the Big 12 championship game and finished 11-3 after a Sugar Bowl loss to Georgia.

Rhule’s collegiate success provided him the opportunity to take over as the Carolina Panthers' head coach in 2020. He guided the Panthers to five wins in each of his first two seasons before this year's 1-4 start got him fired.

Rhule has ties to the Big Ten. He moved from New York City to State College, Pennsylvania, as a teenager. He played linebacker at Penn State from 1994-97 and began his coaching there as a volunteer assistant.