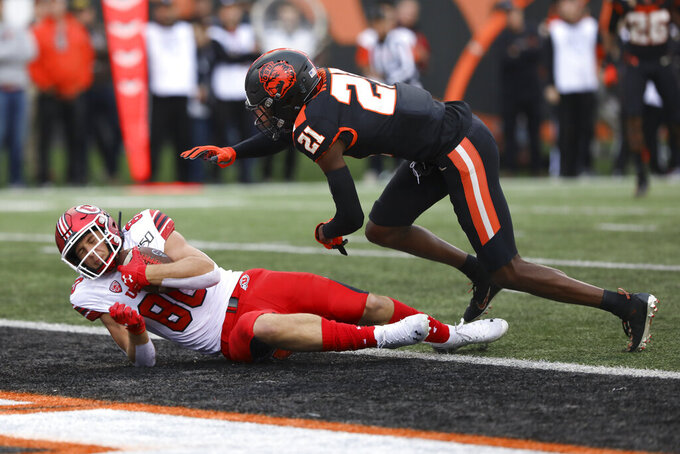 Utah tight end Brant Kuithe (80) lands in the end zone ahead of Oregon State defensive back Nahshon Wright (21) during the first half of an NCAA college football game in Corvallis, Ore., Saturday, Oct. 12, 2019. (AP Photo/Amanda Loman)

He rushed for 121 yards and two touchdowns, including a 91-yard scoring run in the opening quarter, and No. 15 Utah routed Oregon State 52-7 on Saturday night.

Moss, who was returning from a shoulder injury, sat out the second half. He is now just 55 yards from passing Eddie Johnson (1984-88) as the Utes' leading career rusher.

Tyler Huntley threw for 247 yards and two touchdowns for the Utes (5-1, 2-1 Pac-12), who were coming off a bye after downing Washington State to rebound from their lone loss the week before to USC.

Moss missed the game against the Cougars with the injury. If his night against the Beavers was any indication, he's certainly over it now.

"I'm feeling good to go each and every day," he said.

The Beavers (2-4, 1-2) were coming off a 48-31 victory over UCLA at the Rose Bowl last weekend, just their second win this year and first victory over a Pac-12 opponent since last season.

Quarterback Jake Luton, chosen Pac-12 Player of the Week after accounting for six touchdowns (five pass, one run) against the Bruins, threw for 131 yards but was intercepted for the first time this season.

Receiver Isaiah Hodgins, who went into the game ranked second in the nation with an average of 126.4 receiving yards per game, was held to eight catches for 77 yards by the stout Utah defense.

The Utes, ranked 14th in the nation among FBS teams for total defense going into the game, also held Oregon State to just 48 rushing yards.

Utah center Orlando Umana was flagged for targeting and ejected on the Utes' opening drive. Huntley hit Brant Kuithe with a 21-yard touchdown pass on the drive to take the early lead before Moss' statement-making touchdown run, the third-longest in Utes' history, and the fourth-longest play from scrimmage and longest since 2004.

It was the longest touchdown run ever scored against the Beavers.

Huntley added a 3-yard touchdown pass to Samson Nacua to make it 21-0 before the end of the first quarter.

Utah's Devin Lloyd scored on a 64-yard interception return. Luton was sitting at 181 passes without an interception and leading the nation before Lloyd's pick. He was one pass away from tying Matt Moore for the school record.

Moss added a 6-yard touchdown run with less than a minute to go before halftime to give the Utes a 34-0 lead.

"Zack's still not 100 percent, but he did a great job for us. Five carries, a hundred-something yards, and the 90-yarder was impressive. It shows you what kind of speed he has. He's 220 pounds and really did a nice job," coach Kyle Whittingham said.

Devin Brumfield ran for a 1-yard touchdown in the third quarter to push Utah's lead to 42-0 before freshman Jordan Wilmore had his first career TD on a 7-yard scoring run.

Huntley was replaced by backup Jason Shelley for the fourth quarter. Jadon Redding had a 42-yard field goal for the Utes with 9:34 left.

Moss said he's looking forward to setting the rushing record — perhaps as soon as next week at home against Arizona State.

"It will be a good experience next week to have my mom and dad come to the game," he said. "I was kind of happy I was able to get out (of this game) early and have the opportunity next week."

Utah has won four straight against the Beavers.

Utah: It was Moss' 14th 100-yard game, tying the Utah record also held by John White and Devontae Booker. ... Eddie Johnson had 3,219 rushing yards for the Utes. Moss is at 3,165. ... . ... Huntley has yet to throw an interception this season. He has a streak of 133 passes without a pick... Utah is one of just three teams that hasn't thrown an interception this season.

Oregon State: The Beavers were one of just three teams nationwide that hadn't lost a fumble this season. ... The Beavers most lopsided loss to the Utes before Saturday came in 1992, when Utah won 42-9 in Salt Lake City.

MORE SUPERLATIVES: Utah's 42-point margin of victory was its largest since joining the Pac-12. The team's 52 points are the most they've scored since 54 against San Jose State in 2017.

Oregon State visits California on Saturday. The Golden Bears had a bye this weekend.