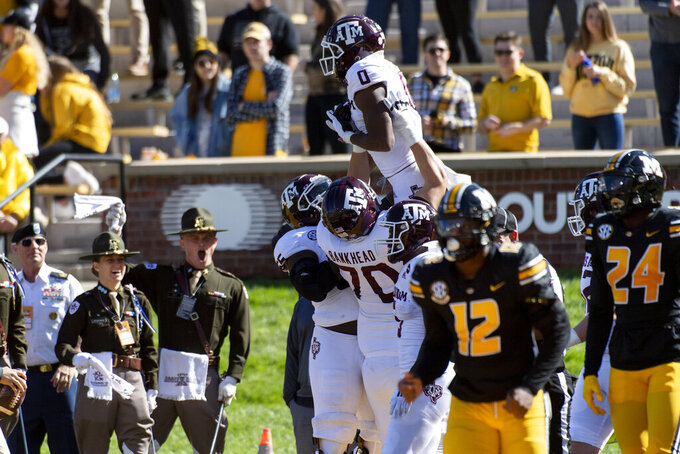 Texas A&M wide receiver Ainias Smith, top is hoisted in the air after scoring a touchdown during the second quarter of an NCAA college football game against Missouri, Saturday, Oct. 16, 2021, in Columbia, Mo. (AP Photo/L.G. Patterson) 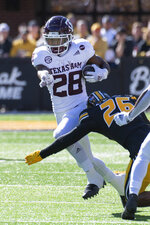 COLUMBIA, Mo. (AP) — Texas A&M coach Jimbo Fisher warned his team all week that it couldn’t afford a letdown after its upset of top-ranked Alabama. His message got through, as the 21st-ranked Aggies buried Missouri early in a 35-14 victory Saturday.

Missouri’s run defense, which ranks last in the nation, has been the cure for many hangovers this season. Texas A&M’s running back duo of Isaiah Spiller and Devon Achane took full advantage of the porous defense. Spiller rushed 20 times for 168 yards and one touchdown, and Achane added 16 carries for 124 yards and two scores for the Aggies (5-2, 2-2 Southeastern Conference).

“We didn’t want to be a one-hit wonder,” Spiller said.

Jaylon Jones and Antonio Johnson each intercepted Missouri’s Connor Bazelak in the first quarter, setting up two touchdowns as the Aggies built a 21-0 lead. Spiller ripped off a 48-yard touchdown run and Achane followed with a 20-yard scoring run on a third-and-15 play.

“We knew coming in we had to bring our own juice,” Johnson said. “It was an early game, and it’s not the same (atmosphere) as playing at Kyle Field, where you have 105,000 fans. We knew as a defense, we needed to make turnovers, get the game going and help the offense get going.”

The Tigers (3-4, 0-3 SEC) showed a little more life in the second half, cutting the deficit to 28-14 with a 97-yard drive, capped by Dominic Lovett’s 7-yard TD run on. But Texas A&M’s defense held Missouri in check the rest of the way, holding the Tigers to 328 total yards.

Missouri’s Tyler Badie rushed 22 times for 68 yards, including a 32-yard touchdown run in the second quarter in which he dragged defensive back Demani Richardson for the final 5 yards. Badie also had seven catches for 53 yards. Bazelak completed 29 of 43 passes for 230 yards.

The Tigers hurt themselves with 13 penalties for 106 yards.

“It starts with not turning the ball over in the first quarter and letting them get 14 points off turnovers,” Missouri coach Eli Drinkwitz said. “We’ve got to do a better job stopping the run, but if we’re not going to stop the run, we’ve got to be a lot better on third down.”

Johnson is a sophomore defensive back from East St. Louis, Illinois, so playing at Missouri was as close as he’ll get to a homecoming. He made the most of it with his first career interception.

“I think he had 60 people here,” Fisher said. “He had a whole cheering section. That’s awesome. He’s playing great. He’s having a heck of a year.”

The home crowd booed Drinkwitz when he ran out the clock in the first half rather than aggressively trying to cut into the Aggies’ 28-7 lead. The Tigers took over on their own 18 yard line with 1:28 left and all of their timeouts available. They started the drive with two running plays and then a few short passes before time expired.

Drinkwitz said he was afraid that if Missouri turned it over and gave up another score and then had to kick off to Texas A&M to start the second half, the game would be out of reach.

“I understand people are upset with it, but that’s how you try to win,” he said.

The boos were emblematic of the dramatic turn in the second-year coach’s popularity. Fans adored him when he went 5-5 against an all-SEC schedule and landed a top-25 recruiting class. This year, the Tigers haven’t beaten a Power Five opponent and the coaches haven’t had any answers to fix a dreadful defense.

“I realize maybe last year we overachieved, so everybody assumed that those expectations would be met this year,” Drinkwitz said. “It hasn’t gone that way. It just hasn’t. That’s part of the process. I wish success was always linear, but it’s not. … We can’t skip steps.”

Texas A&M: After his star turn last week against Alabama, Calzada just needed to be steady against Missouri. He delivered, particularly on a third-quarter drive after the Tigers cut the deficit to 14 points. Facing a third-and-17, he hung in the pocket and hit Smith over the middle for a 21-yard gain. The Aggies went on to score a touchdown to take a 35-14 lead.

Missouri: The Tigers’ SEC games have followed a familiar pattern, with Missouri not ready to play at kickoff. In three conference games, the Tigers have been outscored 63-10 in the first quarter. Missouri’s offense leans on Badie, but the early deficits have forced it to rely more on a shaky passing game.

After rescuing its season and re-entering the AP Top 25 by stunning Alabama last week, Texas A&M assured itself a longer stay in the poll.

Missouri: The Tigers have a week off before visiting Vanderbilt on Oct. 30.