No. 23 Cyclones heads to winless Kansas on Saturday 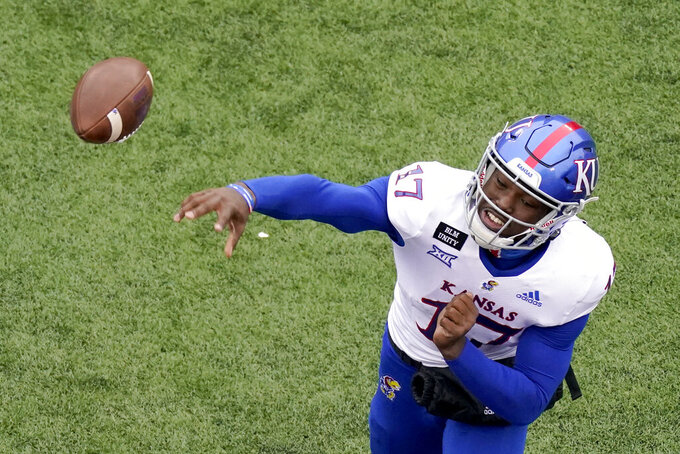 Iowa State still believes it has a shot at the Big 12 title after losing a heartbreaker to Oklahoma State last week, but a let-down against the Jayhawks would wipe out those chances. Kansas is coming off a whipping by rival Kansas State that left coach Les Miles, who had just come back from a positive COVID-19 diagnosis, defending the progress of his program.

Iowa State QB Brock Purdy against the Kansas pass defense. The Jayhawks played well defensively in the first half last weekend, and they need that kind of performance for four quarters against Iowa State. Purdy has thrown for 1,074 yards with five touchdown passes and two interceptions during what has been an uneven start to his season.

Iowa State: RB Breece Hall grew up in Wichita, about a 90-minute drive south of Lawrence, yet bypassed Kansas on his way to playing for the Cyclones. The sophomore leads the nation in rushing and has eclipsed 100 yards each game this season. He carried it 20 times for 85 yards and his ninth TD of the year against the Cowboys last weekend.

Kansas: QB Jalon Daniels is starting to settle into the starting job, but the freshman with the speed and elusiveness on the ground needs to be more efficient — and make better decisions — through the air.

Iowa State has won five straight in the series. ... Hall ranks third nationally with nine TD runs and his three carries of at least 65 yards leads the nation. ... Purdy is 14-6 against the Big 12 with at least one win over every member. ... The Cyclones' defense is allowing 21.2 points but Iowa State also has given up four non-offensive touchdowns. ... Iowa State's JaQuan Bailey is the school's career leader with 40 tackles-for-loss and 22 sacks. Both are second-best among active NCAA players. ... Kansas RB Velton Gardner has run for 297 yards and is averaging 4.7 yards per carry. ... The Jayhawks have not beaten a ranked team since No. 15 Georgia Tech on Sept. 11, 2010. Their last win over a ranked Iowa State team was Oct. 18, 1980.