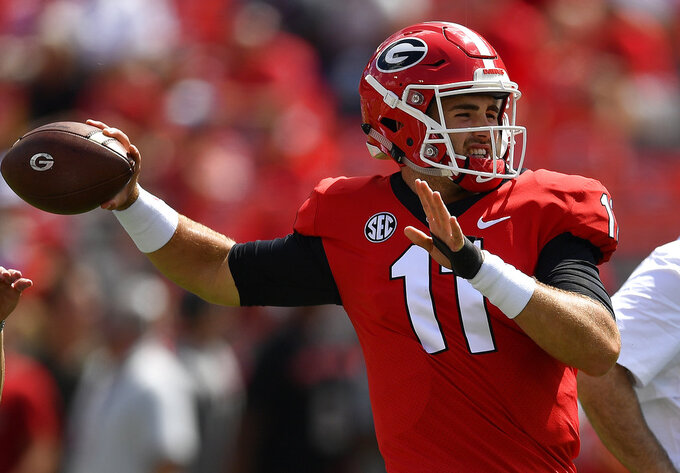 FILE - In this Sept. 1, 2018, file photo, Georgia quarterback Jake Fromm (11) warms up before the first half of an NCAA college football game against Austin Peay, in Athens, Ga. Middle Tennessee plays at No. 3 Georgia on Saturday. (AP Photo/Mike Stewart, File)

Stockstill said that's what it will take for the Blue Raiders to have a chance against a deep Georgia team off to another strong start.

Led by quarterback Jake Fromm, the Bulldogs (2-0) showed in last week's 41-17 win at South Carolina they have the talent to again contend for Southeastern Conference and national championships. That presents a big challenge for a Middle Tennessee program that has a history of wins over Power 5 teams but is 0-15 against ranked opponents.

"We have to play perfect," said Stockstill, the son of coach Rick Stockstill.

"It's really not an exaggeration. If you want to hang with a team like that, you have to play perfect. You have a great plan going in, have the ball bounce your way sometimes, have guys make plays, and hopefully you'll have a chance in the fourth to put one in the end zone and have a chance to win."

Despite losing such key starters as linebacker Roquan Smith, offensive tackle Isaiah Wynn and tailbacks Nick Chubb and Sony Michel from its 2017 SEC championship team, Georgia has enjoyed another strong start. The Bulldogs have topped 40 points in each of their first two wins.

"Our depth is everything," Swift said. "We have so many people that can take it to the house at any moment."

Here are some things to know as Georgia prepares for the game, which was moved up to a noon kickoff time, instead of 7:15 p.m., due to concerns about Hurricane Florence:

Georgia coach Kirby Smart has taken advantage of his team's depth this week with "good on good" practice situations as a complement to more traditional work against the scout team. Smart's goal is to have first- and second-team players continue competitions for starting jobs and playing time.

"That's where I think we can separate ourselves because we can improve during the season," Smart said. "We have enough depth to go against each other and continue to improve and that's the end goal for us."

Brent Stockstill, a senior, has thrown at least one touchdown pass in 25 consecutive games. The left-hander threw for 407 yards and five touchdowns in the Blue Raiders' 61-37 win over UT Martin last week. It was his third career five-touchdown game.

Georgia is paying Middle Tennessee $1.7 million, the most it has paid to have a team play at Sanford Stadium. Smart says he knows fans enjoy games against such big-name teams as Notre Dame, which will play at Georgia next season. He says he'd support the SEC adding a ninth conference game each year.

Still, Smart says he thinks it's important to also schedule games against non-Power 5 teams, including Middle Tennessee. "I'm a big advocate for football in general and I think that they need these games to survive financially," he said. "Without them, some of these programs may not be able to survive."

Georgia kicker Rodrigo Blankenship rotates two pairs of cleats, for home and road games, that he calls his "pink slippers" and "silver bullets." Silver bullets? "Well, they're silver and it's just kind of catchy," he said.

Rick Stockstill, 60, is in his 13th season at Middle Tennessee. He has the longest active tenure in Conference USA and tied for the sixth-longest term in the nation.