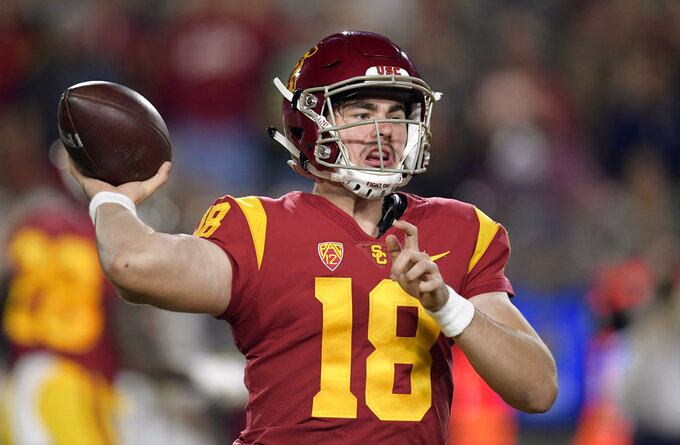 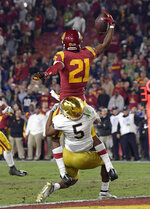 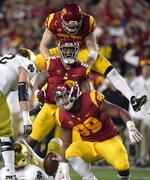 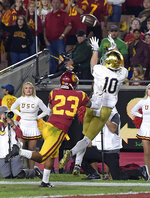 LOS ANGELES (AP) — Notre Dame's offensive skill players gathered on the sideline and looked up at an unfamiliar sight on the scoreboard. The Fighting Irish hadn't faced a double-digit deficit at any point in their perfect season before Southern California jumped to a 10-0 lead Saturday night.

With their national championship dreams suddenly in a wee bit of trouble, running back Dexter Williams spoke up.

"Somebody has got to make a play!" Williams shouted.

Ian Book and Chris Finke did just that on Notre Dame's next drive, and Williams did it himself right after halftime.

By the time the Irish were done making plays at the Coliseum, they were well on the way to the College Football Playoff with the Jeweled Shillelagh firmly in hand.

Book passed for 352 yards, Williams went 52 yards on a go-ahead touchdown run and No. 3 Notre Dame completed an unbeaten regular season and likely secured a playoff spot with a 24-17 over longtime rival USC.

"It brings tears to your eyes," Notre Dame cornerback Julian Love said. "So much is put into this, and it was very tough at times. It just feels so good to get here. Nothing has been handed to us. USC was struggling this year, but they weren't just going to hand it to us. We had to go out there and seize it."

Finke made an exceptional TD catch for the first score by the Fighting Irish (12-0, No. 3 CFP), who showed playoff-level tenacity in rallying from their largest deficit of the season. Tony Jones Jr. then took a short pass 51 yards for a touchdown with 3:09 to play to finish off Notre Dame's 10th perfect regular season since 1945, the first since 2012.

"It's something I dreamed about, so to have it really be like that, it's a surreal moment," said Book, the Californian who improved to 9-0 as Notre Dame's starter, including 8-0 this year. "This whole team, we're just so fortunate to be here. USC, they played great. We knew they had a great defense, and to be able to finish the season off undefeated in a rivalry game, you can't ask for anything better than that."

Notre Dame is all but certain to be chosen for the four-team playoff, and this win could keep the Irish away from powerhouse Alabama in the first postseason game. The Irish celebrated with ferocity in the Coliseum locker room, with their shouts echoing through the old walls into the USC room.

"It's just such an emotional high," Irish linebacker Drue Tranquill said. "We were just dancing in there. I can't really dance, but I was trying."

"The best is yet to be, I truly believe that," Helton said. "I watched the men that are out there, both old and young, and see guys that are truly talented individuals that will develop into a quality football team that can win championships. I know that and I believe that in them."

After USC won eight straight over Notre Dame in the 2000s, the Irish have won six of the last nine meetings in this classic college football matchup. Notre Dame is the first road team to win in the series since 2012, when the Irish also completed an unbeaten regular season with a victory at the Coliseum.

Only four USC teams have finished with losing records since 1961, but this clearly talented group gave a tough game to the powerhouse Irish. The Trojans' 289 yards in the first half were 64 more than the Irish had allowed before halftime all season, and Notre Dame had only trailed twice at any point all season.

Although Jones' late rumble to the end zone clinched the expected result for Notre Dame, the Trojans were competitive with an elite opponent despite the roiling subplot of their coach's future.

USC's 10-7 halftime lead could have been much larger, but receivers Michael Pittman Jr. and Amon-Ra St. Brown both fumbled after catches in Notre Dame territory. The Irish offense didn't score until 2:20 before halftime on that 24-yard throw to Finke, who hadn't caught a TD pass since the season opener against Michigan.

Notre Dame: The Irish showed resilience throughout their cross-country odyssey of a season, and narrowly beating an inspired USC squad is nothing about which to be ashamed. They'll be glad to have the test as they head toward a two-game shot at their first national championship since 1988.

USC: The Trojans showed up well for Helton despite the bleak circumstances, but were undone again by turnovers, penalties and poor play after halftime. Swann should announce his decision on Helton's future shortly.

Helton won the Pac-12 last season and the Rose Bowl just two years ago, but a large portion of the Trojans' fan base is publicly agitating for the dismissal of the coach, who got a contract extension through 2023 just nine months ago.

When Helton's face appeared in a recorded announcement on the scoreboard in the first half, he was booed by a portion of the Coliseum crowd of 59,821 — the smallest for the Notre Dame-USC game in Los Angeles since 1960.

Notre Dame expects to get an invitation to the four-team playoff, hopefully to face Clemson in the Orange Bowl, which had several representatives outside the Irish locker room postgame.

USC's worst season in 18 years is over.