No. 3 Ohio State expects test from surprising No. 9 Indiana 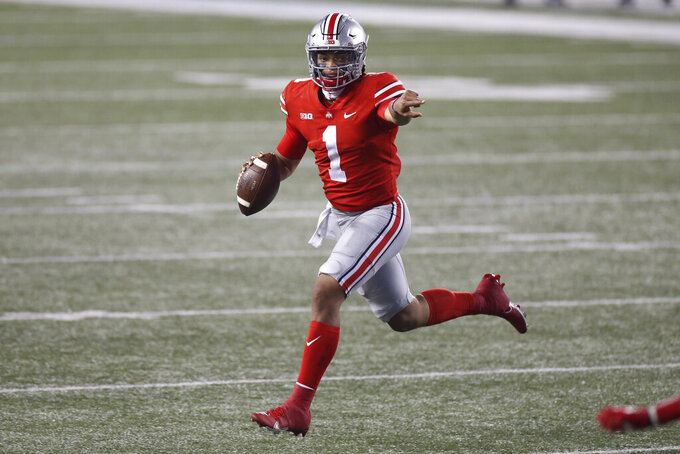 Surprising Indiana has become Ohio State’s primary rival for the Big Ten East title. The Buckeyes got some unexpected time off when last’s week’s road game was canceled because of a COVID-19 outbreak among Maryland players. The Hoosiers, meanwhile, drubbed Michigan State 24-0.

Indiana QB Michael Penix Jr. against Ohio State's defense. After holding Rutgers to three points in the first half of their Nov. 7 game, the Buckeyes defense allowed the Scarlet Knights to score 24 in the second half. Meanwhile, Penix has been excellent. He threw for 320 yards and two TDs against Michigan State last week and is leading the Big Ten in passing yards (1,070).

Indiana: WR Ty Fryfogle set career highs with 11 receptions (second most in the Big Ten this season) for 200 yards (most) and scored two touchdowns against Michigan State. He has 24 catches for a conference-leading 424 yards and four TDs in four games. He has 100 or more receiving yards in three of the four games.

Ohio State: QB Justin Fields is putting up eye-popping numbers and is one of the Heisman Trophy front-runners. Against Rutgers he was 24 of 28 for 314 yards and five touchdowns, and he rushed for another score. He completed nearly 87% of his passes through three games while averaging more than 300 yards per game. He has thrown 11 touchdowns and has zero interceptions.

Ohio State has won 24 straight games over Indiana since a 27-27 tie in 1990. ... Indiana's No. 9 ranking in the AP Top 25 is its highest since Nov. 27, 1967, when the Hoosiers were No. 4 and won a share of the Big Ten title. ... Ohio State has won 17 consecutive games over Big Ten opponents ranked in the AP Top 25. ... This is the first regular-season Top-10 showdown in Indiana program history and just the second overall (1968 Rose Bowl, No. 4 Indiana vs. No. 1 Southern Cal). ... Buckeyes WR Chris Olave is tied for second in the Big Ten with four touchdown receptions and has multiple TD catches in each of the last two games. ... Indiana has beaten Penn State, Michigan and Michigan State in the same season for the first time in program history.