No. 6 Washington regrouping after opening loss to Auburn 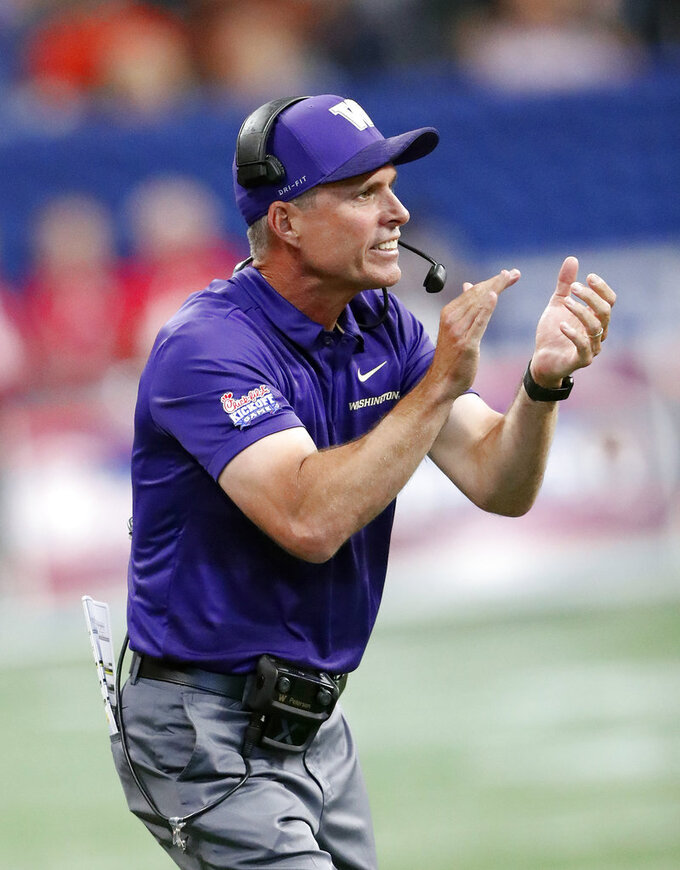 Washington head coach Chris Peterson yells to his players in the first half of an NCAA college football game against Auburn, Saturday, Sept. 1, 2018, in Atlanta. (AP Photo/John Bazemore)

SEATTLE (AP) — Now that all the hype around Washington's season-opening top-10 showdown against Auburn has passed, the Huskies can move on with the rest of their season.
It starts with regrouping after a loss that will leave the Pac-12 favorite trying to make up ground nationally.
"Didn't play our best ball when we needed it, when we needed to come through," Washington coach Chris Petersen said Monday. "Certainly on offense we did some really good things, but then when we really needed to it just felt like we kind of didn't step up like I think we're capable of. We'll live and learn and move forward."
No. 6 Washington's 21-16 loss was filled with frustration for the purple and gold. From the Huskies' failures in the red zone to giving up a fourth-quarter touchdown drive to the ninth-ranked Tigers, Washington returned from the much-anticipated season opener in Atlanta with plenty to lament.
For all the good quarterback Jake Browning did in throwing for 296 yards and a touchdown, he was also criticized for his decision-making on Washington's final drive and for an option play in the third quarter deep in Auburn territory where he fumbled and the Tigers recovered. Petersen said they should have checked to a different play.
Washington scored just one touchdown on its six red-zone possessions. One touchdown was called back because of offensive pass interference against Andre Baccellia. Another potential TD pass from Browning to Baccellia was deflected at the last moment by Auburn's Darrell Williams, which Petersen called the play of the game for the Tigers.
"I think it starts with us having a better plan. I say that; I'm involved with the red zone, so I'm talking about myself. We have to have a better plan there, give our guys a better chance," Petersen said. "I think they are one of the better red zone teams. You could see that last year when you put the tape on and they seem to pick up where they left off in terms of how they play down there."
Petersen did not have an updated on the situation with left tackle Trey Adams, who did not make the trip to Atlanta for the opener after suffering a back injury in practice last week. The Seattle Times reported Monday that Adams' injury may be significant enough to keep him out for the 2018 season. Petersen said no decisions have been made about how to move forward with Adams.
"I haven't met with Trey or his parents. We're meeting later with the doctors and all that," Petersen said.
Adams missed the second half of the 2017 season after suffering a torn ACL in his right knee. He spent the offseason rehabbing and was in line to return to the lineup before being injured in practice early last week.
With Adams sidelined, junior Jared Hilbers got the start against Auburn and did not appear to be exposed against one of the top defensive lines in the country.
"I thought he did a solid job. I think overall our (offensive) line will play better, but I think Jared's got the tools to be a very good football player," Petersen said.
NOTES: Petersen still seemed stunned a targeting penalty wasn't called against Auburn's Big Cat Bryant for a hit on Browning in the fourth quarter that could have kept a drive alive. "I don't know how to fix that. They have guys upstairs looking at targeting too. It's blatant as all get-out. It is what it is. But move on," Petersen said. ... Washington has won 16 straight nonconference home games. The last loss was to Nebraska in 2010.
___
More AP college football: https://apnews.com/tag/Collegefootball and https://twitter.com/AP_Top25