No. 7 Auburn looks to avenge loss vs Mississippi State 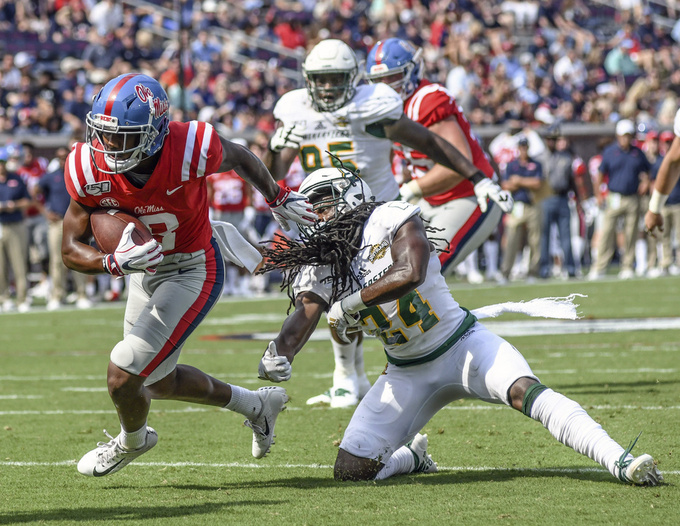 Here are some things to watch during the fifth week of the Southeastern Conference football season.

Mississippi State (3-1, 1-0) at No. 7 Auburn (4-0, 1-0): The undefeated Tigers will try to avenge the 23-9 loss at Mississippi State last year. This game features the SEC's top two rushers in Mississippi State's Kylin Hill (91 carries, 551 yards, 5 TDs) and Auburn's JaTarvious Whitlow (82-408-4). Mississippi State's chances of pulling the upset depend on whether Hill can find running room against a stingy Auburn defensive line featuring Derrick Brown and Marlon Davidson. Brown recorded two sacks and three tackles for loss and also forced a fumble and broke up two passes last week in Auburn's 28-20 victory over No. 23 Texas A&M, which was ranked 17th at the time of the game.

Mississippi wide receiver Elijah Moore vs. Alabama cornerbacks Patrick Surtain II and Trevon Diggs: Moore is the SEC's fourth-leading receiver and has 29 catches for 380 yards and three touchdowns. Moore had 11 catches for 102 yards last week in a 28-20 loss to No. 15 California. He faces an even bigger challenge Saturday against second-ranked Alabama's secondary. Whether Moore is lining up against Surtain or Diggs, he could have a much tougher time getting open.

No. 4 LSU is averaging 57.8 points per game to lead all Football Bowl Subdivision programs. LSU's 231 points are the most ever by an SEC team through its first four games. ... Alabama has 10 takeaways and just two turnovers to rank second nationally in turnover margin, behind only Boston College. ... Arkansas' 31-24 loss to San Jose State last week dropped the Razorbacks' record against Group of Five opponents to 2-3 since Chad Morris took over the program last year. Arkansas lost to Colorado State and North Texas last year. ... No. 9 Florida joins Washington State as the only FBS teams that have six players with at least five catches and 100 yards receiving this season. ... Mississippi State and No. 5 Ohio State are the only Power Five teams that have run for 200-plus yards in four games this year. ... Kentucky has won its last five meetings with South Carolina heading into Saturday's matchup, though the Gamecocks lead the series 17-12-1. ... Texas A&M will try to beat Arkansas for an eighth straight time Saturday, though Arkansas leads the series 41-31-3.

It's tough to pick an upset in the SEC this week. South Carolina's only favored by two over Kentucky, so it wouldn't be much of an upset if either team wins that game. And most of the other games taking place this week shape up as likely mismatch. One team on upset alert may be winless Vanderbilt, which is favored by 6 ½ over Northern Illinois. Vanderbilt's the more talented team, but the Commodores' confidence level could be an issue after they opened the season losing to No. 3 Georgia, Purdue and No. 4 LSU by a total of 70 points.

A defensive tackle rarely leads a conference in sacks, but South Carolina's Javon Kinlaw is tops through the first four weeks of the season. Kinlaw recorded his fourth sack of the season last week in a 34-14 loss to Missouri. Although Kinlaw was named the co-MVP of South Carolina's defense along with T.J. Brunson last year, this marks a breakthrough season for the senior from Charleston, South Carolina. He entered the year with 4 ½ career sacks and has already nearly doubled that total.

This story has been corrected to show that Mississippi State and Ohio State are the only Power Five teams with 200-plus yards rushing in four games.