No. 7 Oklahoma St hopes to avoid slip-up against Texas Tech 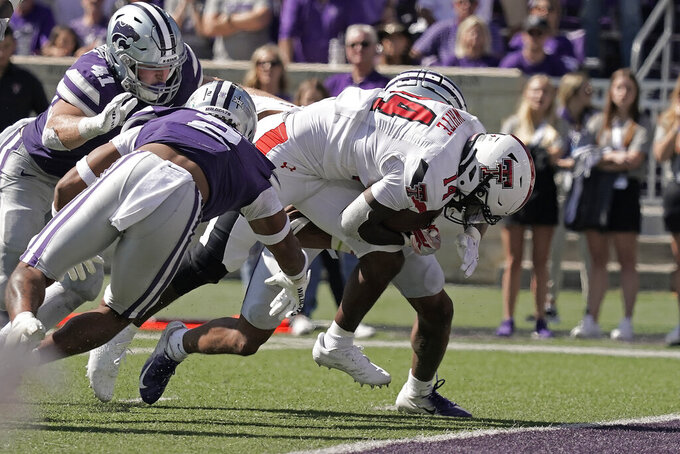 Oklahoma State is in prime position in the Big 12 race.

The Cowboys opened the conference schedule with a 36-25 road win over Baylor, the media's preseason Big 12 favorite.

Now, the Cowboys face Texas Tech – a battle-tested group facing its fifth straight ranked opponent. The Red Raiders (3-2, 1-1 Big 12) already have wins over Houston and Texas, and they look forward to another challenge.

“We’re excited about it,” Tech coach Joey McGuire said. “It’s definitely helping us grow up as a football team and a football program. Our guys will be ready to play that game.”

Oklahoma State (4-0, 1-0) is riding quarterback Spencer Sanders' elite play. He has 11 touchdowns passing and four touchdowns rushing to pace an offense that ranks fifth nationally with 47.8 points per game.

He’ll face a Texas Tech defense that believes in pressuring the quarterback. Linebacker Tyree Smith leads the way with 5.0 sacks.

“They’re going to come after us,” Oklahoma State coach Mike Gundy said. “They’re going to blitz, stunt, twist, drop, rush three, rush four, bring safeties and do a lot of different things to try and pressure us. We have to get ready for lots of pressure and lots of blitzing.”

But the Red Raiders will need to be disciplined. Tech gave up 171 yards and three touchdowns rushing to Kansas State quarterback Adrian Martinez last week. Sanders can run, too – he has 185 yards on the ground this season.

“Spencer does a great job with his arm, but he also can beat you with his feet,” McGuire said. “So we’ve got to do a better job of containing the quarterback. Little bit different quarterback run game, but still can hurt you. Every bit as fast and athletic as the guy we just got through playing.”

Texas Tech’s offense is pretty good, too. The Red Raiders rank fourth nationally in passing offense with 362.2 yards per game.

Donovan Smith leads the Tech offense. He has passed for 295 yards per game and has three rushing touchdowns. McGuire believes he's a good player who has a chance to eventually play in the National Football League.

“He’s given us a chance to be in a lot of games,” McGuire said. “He’s a big guy that will step up and make some courageous throws.”

Collin Oliver has three sacks and Tyler Lacy and Brock Martin have two. Kody Walterscheid and Trace Ford also are formidable. It’s a group McGuire called one of toughest defensive fronts in the country.”

Gundy believes that the depth at defensive end and on the defensive line overall might be helpful on Saturday.

“We’re getting into a game here where there very well could be 100 plays on both sides of the ball from the standpoint of we play fast and they play fast,” he said. “That depth could be important.”

Gundy is 55 and McGuire is 51, but their resumes are much different.

Gundy is in his 18th year and has a career record of 153-69. McGuire is a first-time head coach trying to build something after spending the previous five years as an assistant at Baylor.

“If you think about coach Gundy, I mean he’s the guy that -- we’re around the same age, but he’s kind of the old guy in the conference,” McGuire said. “What he’s been able to do year in and year out is pretty incredible.”

Oklahoma State’s Braydon missed most of last season with an injury, but the redshirt senior has returned with a bang. He leads the team with 360 yards receiving and is tied for the team lead with three touchdowns.

Oklahoma State will add Bob Fenimore to its Ring of Honor on Saturday. The halfback nicknamed the “Blond Bomber” finished ninth in the Heisman Trophy vote in 1944 and third in 1945. He will join Barry Sanders and Thurman Thomas.

The Chicago Bears chose Fenimore No. 1 overall in the 1947 NFL draft, and he was inducted into the National Football Foundation’s College Football Hall of Fame in 1972.