No. 9 Oklahoma escapes with 42-41 victory over Iowa State 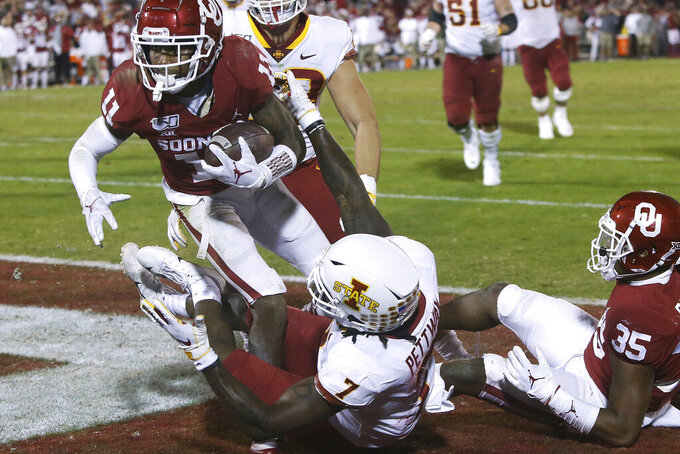 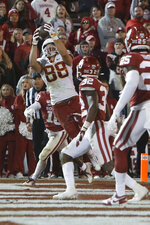 NORMAN, Okla. (AP) — Iowa State coach Matt Campbell saw an opportunity to seize a win that would boost the Cyclones' chances of reaching the Big 12 title game, so he put everything on quarterback Brock Purdy.

Campbell went for the victory on the two-point try after Charlie Kolar caught a 13-yard touchdown pass to pull the Cyclones — down 42-21 in the second half — within one. Campbell said he didn't regret going for two because Purdy already had passed for 282 yards and five touchdowns and rushed for 55 yards and another score.

"When I see Brock Purdy making unbelievable play after unbelievable play, I'd rather put the game in his hands because I trust him," Campbell said. "Yeah, the question if I would do it over again — yes, in a heartbeat."

The Cyclones accelerated their revival two years ago with a 38-31 win on the same field. Campbell almost pulled off another stunner.

"I thought we had a guy open for a second," he said of the two-point conversion. "We look like we had a chance to catch the ball, but the guy intercepted it at the end of it. Credit to them, they made the great play at the end."

"You have games like this," Oklahoma coach Lincoln Riley said. "You don't want them, especially when you have a chance to separate like we did. But if they happen, you've got to find a way to man up and find a way to win in the end. And I'm really proud of our kids, our defense, for doing that in the end."

CeeDee Lamb had 167 yards and two touchdowns receiving and Kennedy Brooks ran for a season-high 132 yards to help Oklahoma bounce back from a loss to Kansas State two weeks ago.

Oklahoma extended its November winning streak to 18 games and set up a showdown at league-leading Baylor next week.

Lamb put on a show in the second quarter. On his 62-yard touchdown reception, he caught the ball on the left sideline, then cut across to the opposite sideline. He lowered his shoulder through a defender to reach the end zone and push Oklahoma's lead to 28-7.

The Sooners seemingly took control with a 10-play, 97-yard drive in the third quarter. Brooks finished it with a 48-yard run that gave Oklahoma a 42-21 lead.

Purdy connected with Sean Shaw for a 33-yard touchdown to trim Oklahoma's lead to 42-35, then Lawrence White intercepted Hurts to give Iowa State good field position and set up the final sequence.

Iowa State: All four of the Cyclones' losses are by seven or fewer points. The Cyclones are a play here and there from a special season.

Oklahoma: The Sooners barely hung on and still have questions about their defense heading into the showdown with Baylor.

There may be some room for the Sooners to move up with losses by Alabama and Penn State. Iowa State is a respected opponent, so the Sooners won't be downgraded for playing a close game.

"I don't know what Charlie did different for this one, but what I do know is Charlie has been exceptional for us this year," Campbell said. "I know that's hard when you come back home. Obviously, for him there are a lot of ties to this community, to this university."

Lamb moved into a tie with Mark Clayton for second place in school history with 31 career touchdown receptions. He passed Juaquin Iglesias and moved into fourth place in career yards receiving and now has 2,948 yards.

Oklahoma kicker Calum Sutherland is off the team.

A school spokesman confirmed the decision but did not specifically say why the move was made. Sutherland, a sophomore, was arrested Sept. 21 on a public intoxication charge and suspended indefinitely. A woman filed for a protective order against him last month.

In his most recent action, Sutherland made two field goals to help the Sooners beat UCLA 48-14 on Sept. 14.

Oklahoma plays at No. 11 Baylor on Saturday in a matchup that will affect the Big 12 title picture and could affect the College Football Playoff.