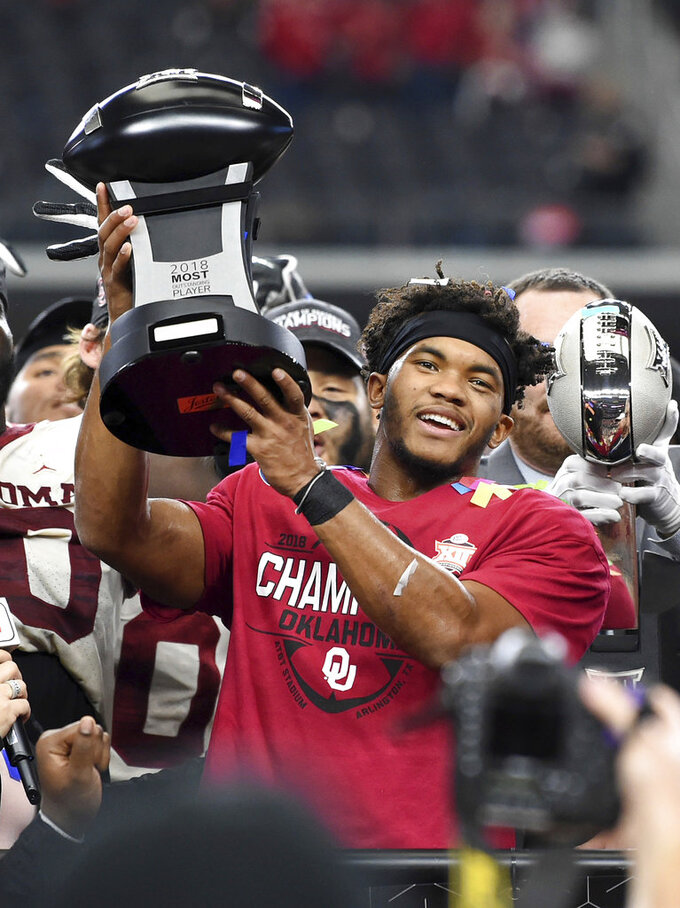 Oklahoma's Kyler Murray won The Associated Press college football Player of the Year on Thursday, becoming the second straight Sooners quarterback and fifth overall to win the award since it was established in 1998.

Murray and Tagovailoa will now head to New York City as Heisman trophy finalists, with the winner more uncertain than usual. Haskins also is a finalist for the Heisman Trophy , which will be presented Saturday night in New York.

The last five Walter Camp winners won the Heisman Trophy and the last four Maxwell winners have won the Heisman. Only twice since 2002 has the AP Player of the Year not won the Heisman, Nebraska's Ndamukong Suh in 2009 and Stanford's Christian McCaffrey in 2015.

Murray and Tagovailoa will then face each other in the College Football Playoff, when No. 1 Alabama plays No. 4 Oklahoma at the Orange Bowl semifinal on Dec. 29.

The rest of the college football award winners Thursday night were:

Murray, a 5-foot-10, 195-pound junior from Allen, Texas, won the award in his final year as a college athlete. The Oakland Athletics took Murray with the ninth pick in the Major League Baseball draft in June. Murray, who batted .296 with 10 home runs and 13 doubles in 50 games as the Sooners' center fielder, signed for nearly $5 million, with the A's agreeing to let him return to school and play football this season .

Murray was Mayfield's backup last season and won the starter's job in preseason practice. He went on to become one of three 4,000-yard passers in the nation and threw for 40 touchdowns. He also has rushed for 892 yards and 11 TDs.

Murray started his career at Texas A&M, where his father, Kevin Murray, set season and career passing records as the Aggies' quarterback in the mid-1980s. Kyler Murray transferred to Oklahoma after his freshman season, sat out a season per transfer rules and then backed up Mayfield.

"It's been a long journey with a lot of waiting, but I think it's all been worth it," Murray said. "All the hard work with my teammates has really paid off."