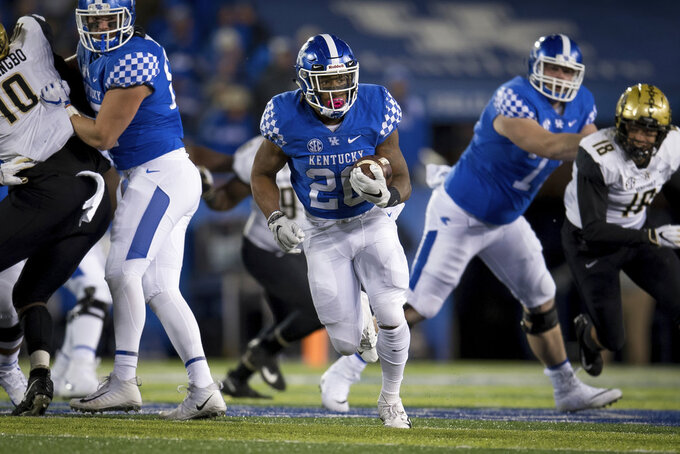 Kentucky running back Benny Snell Jr. (26) carries the ball during the second half of an NCAA college football game against Vanderbilt in Lexington, Ky., Saturday, Oct. 20, 2018. (AP Photo/Bryan Woolston) 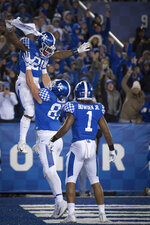 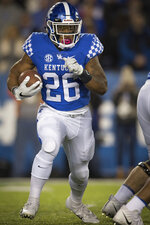 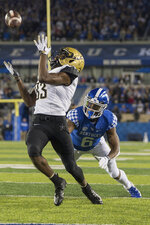 LEXINGTON, Ky. (AP) — Kentucky's hope of winning with style coming out of an off week quickly evolved into doing whatever it could to get past Vanderbilt.

The No. 14 Wildcats eventually succeeded behind the reliable combination of running back Benny Snell Jr. and a fierce, opportunistic defense that wouldn't break.

Snell rushed for 169 yards, including the go-ahead 7-yard run with 8:04 remaining that helped Kentucky pull away for a 14-7 victory over Vanderbilt on Saturday night.

The Wildcats (6-1, 4-1 Southeastern Conference) clinched bowl eligibility for a third consecutive season and stayed in contention in the East division with their third straight victory over the Commodores (3-5, 0-4). But it took nose guard Quinton Bohanna to force Jamauri Wakefield's fourth-down fumble that he recovered at the 20 midway through the fourth quarter to jump-start Kentucky from game-long inconsistency.

"We know what we can do running the ball," said Snell, who managed just 60 yards rushing in a 20-14 overtime loss at No. 17 Texas A&M two weeks ago. "In that situation, it was evident what we had to do."

The SEC's rushing leader also factored big in Kentucky's game-tying scoring drive by carrying eight times for 39 yards, including a 3-yard run to the Commodores' 5. Quarterback Terry Wilson capped it with a short TD pass to Lynn Bowden on the next play, but Snell set the tone.

Ugly? Yes. And Wildcats coach Mark Stoops will take it coming off a loss.

"We struggled at times, but you got to love that drive," he said. "When everybody in the stadium knew we were going to run the football and grind out 70, 80-yard drive and get it in the end zone says a lot about our football team, their attitude, their toughness, finding a way to win.

"There are things we need to do better, but win or lose we'll go back to work and look at ourselves. But you can't apologize for being 6-1."

Daniel's play was one of four forced four fumbles with two recoveries, the second by Mike Edwards with 1:04 left that sealed the outcome. The Wildcats also recorded four sacks.

"We pride ourselves on being the best team out there and making big plays," said linebacker Josh Allen, who had two sacks among eight tackles.

Vanderbilt played without leading rusher Ke'Shawn Vaughn, who did not make the trip after getting hurt last week against Florida. The Commodores converted a first-quarter takeaway into Kyle Shurmur's 29-yard TD pass to C.J. Bolar, but that was their only lead as they rushed for just 68 yards.

Vanderbilt coach Derek Mason said his decision to go for the first down instead of kicking a field goal in the fourth quarter was based on an earlier missed kick.

"I didn't know how many more opportunities we would have to get down that way," he said, "so I felt that it was critical for me to go for it on fourth down. Obviously, we came up short."

Kentucky was flagged four times for 35 yards, but two second-half penalties killed chances to go ahead. The first was a holding penalty that wiped out Lynn Bowden's 90-yard kickoff return for a TD. Cornerback Derrick Baity was called for holding soon after, wiping out his interception of Shurmur.

Vanderbilt: The Commodores again got the jump on another ranked school, converting a turnover into a 29-yard touchdown pass for the game's first score. They had other decent plays but were inconsistent and couldn't run the ball. Those turnovers also hurt.

Kentucky: After insisting all week that there would be no post-bye hangover, the Wildcats were sluggish in nearly all phases. Consecutive turnovers and poor tackling allowed Vandy to grab the early edge. The defense stiffened up some and the offense began imposing its will well enough to tie the game, but costly penalties after halftime thwarted chances to put it away until Bohanna's forced fumble and recovery.

Vanderbilt visits Arkansas on Saturday, seeking to end a three-game slide in the first series meeting since 2011.

Kentucky visits Missouri on Saturday, seeking its fourth straight win against the Tigers.