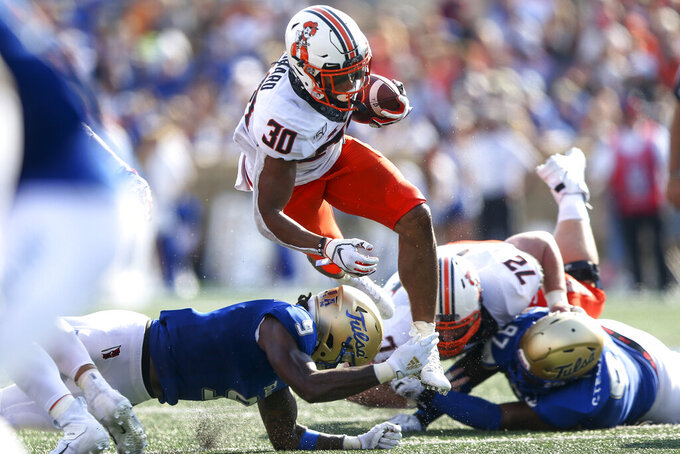 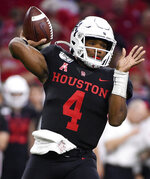 There have been four 200-yard rushing games this season, and two of them belong to Oklahoma State's Chuba Hubbard.

Hubbard ran for a career-high 256 yards on 32 carries against Tulsa on Saturday and moved from ninth to first on the national rushing chart with an average of 173.7 yards per game.

Hubbard, whose first name is pronounced "CHOO-buh," opened the season with 221 yards on 26 carries against Oregon State.

His three touchdowns rushing against Tulsa moved him into a tie for first in the nation with seven.

The redshirt freshman from Canada has five 100-yard games in his career, all in the Cowboys' last seven games.

His rushing total against Tulsa was the highest by an OSU player since Kendall Hunter went for 257 yards in the 2010 opener against Washington State.

Houston quarterback D'Eriq King has passed and run for a touchdown in 14 straight games, tied for the longest streak in FBS history with Florida's Tim Tebow (2006-08).

Three kickers made 57-yard field goals, tied for longest in the nation since 2016.

Penn State's Jordan Stout kicked his against Pittsburgh, Illinois' James McCourt hit his against Eastern Michigan and Texas' Cameron Dicker made his against Rice.

Stout broke Penn State's 44-year-old school record of 55 yards set by Chris Bahr. McCourt tied the Illinois record, and Dicker's field goal was the longest by a Texas kicker since 1985.

Boise State's Curtis Weaver tied the school record with four sacks against Portland State, most by a Broncos player since 1996. Weaver is tied for the national lead with six sacks, and his career total of 26 1/2 is highest of any active Football Bowl Subdivision player.

Southern Mississippi's Jaylond Adams became the first player this season to go over 300 all-purpose yards. He had career highs with 11 catches for 180 yards and ran back a kickoff 100 yards. Those were the highlights of his 322-yard performance, the best by a Southern Miss player since 1982.

CONVERTING ON THIRD DOWN

Arizona converted a nation-high 15 third downs on 21 attempts against Texas Tech, the most since Tulsa converted 16 against Oklahoma State in the 2017 opener.