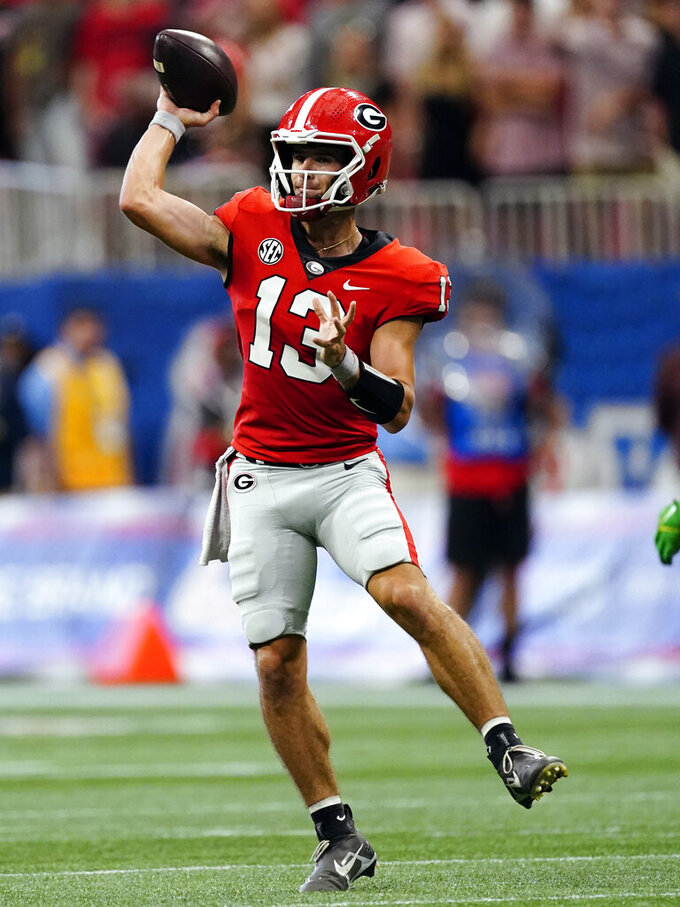 So much of the talk about Georgia last year focused on a defense that produced five NFL first-round draft picks.

The Bulldogs' defense showed no sign of dropping off against No. 11 Oregon, but it was the offense that was front and center statistically in a 49-3 win Sunday.

The No. 3 and defending national champion Bulldogs became the second team in 15 seasons to score a touchdown on its first seven possessions against a ranked opponent.

The seven TD drives ranged from six to 12 plays, the first six under the direction of quarterback Stetson Bennett. Backup Carson Beck was in the game for the seventh. The streak ended when they went three-and-out on their first full series of the fourth quarter.

Last year Ohio State reached the end zone on its first seven drives, all in the first half, against then-No. 9 Michigan State.

FBS kickers have been pretty much automatic on extra points, having converted 577 of 586 this season. Of the nine misses, three were blocked — none bigger than Shyheim Brown’s deflection of Damian Ramos' try on the final play of Florida State's 24-23 win over LSU on Sunday.

In the past 20 years, according to Sportradar, no previous one-point game involving an FBS team had ended with the winning team blocking an extra point with no time left in the fourth quarter.

Kickers for Baylor and Akron also had extra-point tries blocked over the weekend.

According to Stats Perform, Saturday marked the first time an FBS team scored at least 60 points and lost and an FBS scored fewer than 10 points and won on the same day. Iowa turned a field goal and two safeties into a 7-3 win over South Dakota State.

Kansas heads to West Virginia this week with a shot of confidence from some of its offensive feats, albeit against Tennessee Tech of the Championship Subdivision.

The Jayhawks' average of 9.9 yards per carry was their highest in a game since at least 2000. Their 297 rushing yards were their most since they had 508 against Rutgers in 2018.

Wisconsin, in a 38-0 win over Illinois State, was the first FBS team in four years to have a run, pass and interception return of at least 70 yards in the same game.

Braelon Allen's 96-yard touchdown against Illinois State was the longest run from scrimmage in program history, John Torchio set a school record with a 100-yard interception return and Chimere Dike turned a short pass into a 74-yard gain for the longest completion in quarterback Graham Mertz’s career.

Middle Tennessee was the previous team with 70-yard plays three different ways, doing it against Old Dominion in 2018. No Big Ten team had done it since 2003.

Haaziq Daniels put the air in Air Force on his first pass attempt of the season.

The Falcons, whose triple-option offense has had a run-pass ratio of nearly 90-10 the past two seasons, scored their first touchdown in a 48-17 win over Northern Iowa on Daniels' 80-yard pass to Dane Kinamon.

Air Force faced third-and-12 from its 20 when Daniels scrambled to his left and threw to Kinamon, who had his defender beat by 5 yards and caught the ball in stride.