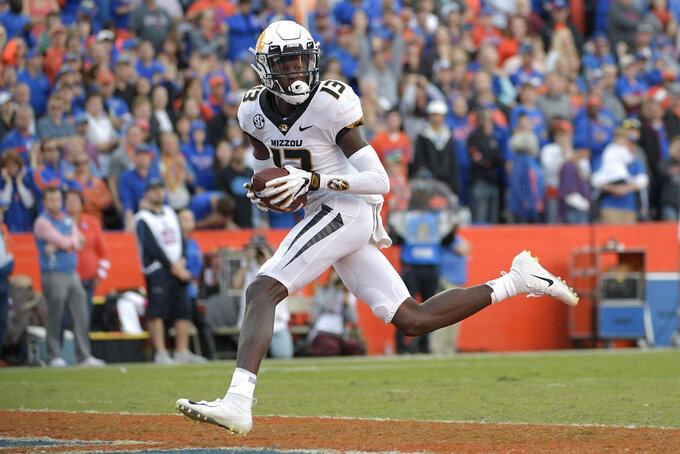 Missouri wide receiver Kam Scott (13) runs into the end zone after catching a pass for a 41-yard touchdown during the second half of an NCAA college football game against Florida, Saturday, Nov. 3, 2018, in Gainesville, Fla. (AP Photo/Phelan M. Ebenhack) 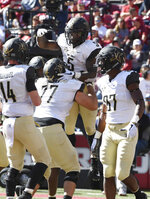 COLUMBIA, Mo. (AP) — Missouri had been lacking a signature win in quarterback Drew Lock's final season, losing late on the road against South Carolina and two weeks ago to Kentucky.

The moment finally came last week on the road against No. 11 Florida, when the Tigers seemed to put everything together for the first time in a 38-17 rout — coach Barry Odom's first win over a ranked team.

The Tigers (5-4, 1-4 SEC) hope to take the same approach into Saturday's game against Vanderbilt. Missouri can become bowl-eligible by beating the Commodores (4-5, 1-4), then build its resume with a favorable finishing stretch. The Tigers get Tennessee and Arkansas to finish out the season.

Vanderbilt is fighting for bowl eligibility, too. The Commodores follow their trip to Columbia with home games against Ole Miss and Tennessee.

"I just want one win," Vanderbilt coach Derek Mason said. "Let's talk about that. We've got to talk about today, and that's exactly what I did with my football team."

"I heavily desire to play in December," he said. "I want to play postseason football. I want to do a lot of things. I want to go out of here with a bowl win. That's what these seniors deserve."

After losing three straight, the Commodores got back on track with a 45-31 win at Arkansas as Ke'Shawn Vaughn ran for 172 yards and three touchdowns. He will face a Missouri defense that ranks 25th nationally and allows just 125 yards rushing per game.

The Commodores also must contain a Tigers offense that piled up 471 yards on Florida.

Both guys under center — Lock for the Tigers, Kyle Shurmur for the Commodores — have started in all four years at their respective schools. Shurmur ranks third on the Commodores' career passing list with 7,772 yards. Lock has 11,089 yards and needs just 65 more to move into fifth place on the SEC's career list.

"I feel like (Shurmur) and I played against each other," joked Odom, who played linebacker for the Tigers from 1996-99.

HALL OF A RETURN

Missouri senior wide receiver Emanuel Hall took the field last week after missing four games with a groin injury and coping with the loss of his father. He caught four passes for 77 yards and a touchdown, igniting the Tigers in their blowout win over the Gators.

"You wouldn't write that script for a guy to have his senior year," Odom said. "He's continued to stay in there and battle every day. And he's battled some off-the-field things very admirably."

The Commodores could be without a pair of safeties. LaDarius Wiley's father died late last week, and Mason said the safety will rejoin the team when possible, even as late as Saturday. Zaire Jones has been suspended indefinitely for violating the student conduct policy. Mason said Jones will miss the rest of this season. Wiley has started every game this season Commodores' second leading tackler. Jones has started once and has 13 tackles.

Vanderbilt linebacker Jordan Griffin leads the team with 46 solo tackles and 91 total tackles. The senior's total puts Griffin second in the SEC behind Arkansas' De'Jon Harris, who has 93 heading into Saturday.

Earlier in the season, Missouri couldn't avoid its own mistakes in turning the ball over. But the Tigers have now played 209 consecutive offensive snaps without committing a turnover.