UNLV slips past Nevada 33-30 in overtime 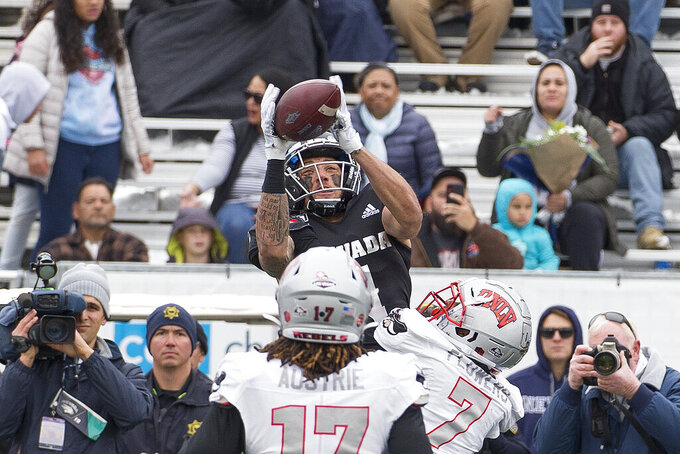 RENO, Nev. (AP) — Freshman quarterback Kenyon Oblad hooked up with freshman receiver Steve Jenkins for a 19-yard touchdown in overtime and UNLV slipped past instate rival Nevada 33-30 on Saturday in the Battle for the Fremont Cannon.

Nevada (7-5, 4-4) scored on three straight possessions — a 2-yard TD run by Devonte Lee and two field goals by Brandon Talton — to close within 17-13. But Oblad needed just one play after Talton’s second field goal to push the lead Rebels’ lead to 24-13 when he connected with Jenkins for a 75-yard score on first down.

After a scoreless third quarter, Gutierrez booted a 50-yard field goal to put UNLV up 27-13 with 9:08 remaining in the game. The Wolf Pack closed to within 27-20 on Carson Strong’s 24-yard TD pass to Dominic Christian with 6:47 left and sent the game to overtime when Lee capped a 10-play, 75-yard drive with a 1-yard TD run with 1:32 left in regulation.

Nevada grabbed a 30-27 lead in overtime on Talton’s 42-yard field goal, but the Rebels needed just three plays for Oblad to find Jenkins for the game-winner.

Oblad finished 16-of-22 passing for 229 yards and three TDs. Williams ran for 138 yards on 20 carries, while Jenkins hauled in five passes for a career-high 140 yards and his first two TDs.

Strong completed 33 of 54 passes for 351 yards and a TD for the Wolf Pack. Elijah Cooks had 12 catches for 151 yards — both were career highs for the junior.

Nevada, which was trying for its first eight-win season since 2010, saw its three-game win streak end. UNLV took home the Fremont Cannon for the second straight year.