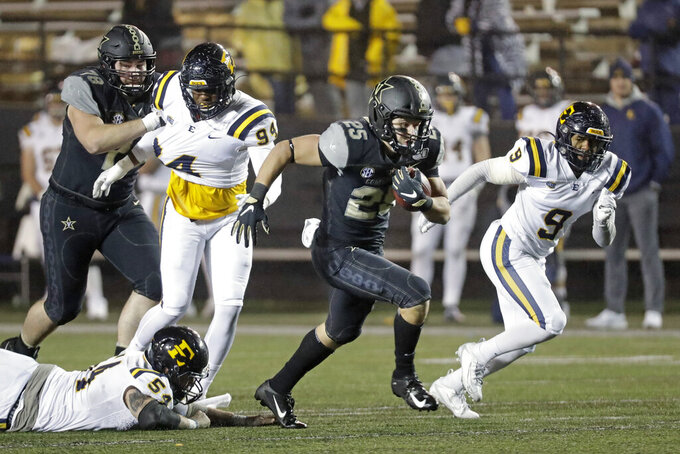 Vanderbilt running back Mitchell Pryor (25) gets past ETSU defenders Olajuwon Pinkelton (94) and Tyler Murphy (9) as Pryor runs 31 yards for a touchdown in the second half of an NCAA college football game Saturday, Nov. 23, 2019, in Nashville, Tenn. Vanderbilt won 38-0. (AP Photo/Mark Humphrey)

The Commodores responded with a 38-0 win over East Tennessee State in Vanderbilt’s home finale on Saturday, ending a three-game losing streak.

Ke’Shawn Vaughn, a redshirt senior from nearby Pearl-Cohn High School in Nashville, rushed for 139 yards and two touchdowns.

He moved into sixth place in career yards at Vanderbilt with 2,259.

“We had some opportunities to get the ball to our playmakers and that’s what you want to see from this football team,” said Commodores coach Derek Mason, who is headed for his sixth straight losing season. “We just need to continue to build off this one. I think we still need to be better in some areas.”

The Buccaneers ended their season with their first shutout loss since 2016.

ETSU’s Quay Holmes, who rushed for a school-record 255 yards in last week’s win over Mercer, was held to a season-low 10 yards on 11 carries.

“Vandy, they just came out and they really challenged us to be able to move the ball running it and they challenged us to make plays through the air,” Holmes said. “They were definitely loading the box, playing up from what I saw and bringing a lot of people to the show when it came to running the ball.”

“Vanderbilt is bigger, stronger and faster than what we see week-in, week-out,” ETSU coach Randy Sanders said. “They knew if they could stop us from running the ball, quarterback and wide receivers weren’t our strengths right now. I thought they tried to load the box a little bit the first half, but I think they figured out they didn’t necessarily have to and then they sat back and made sure they didn’t give up any big plays.”

The Commodores won their ninth straight against an opponent from Tennessee and improved to 35-6 against Southern Conference teams.

The Commodores took a 14-0 halftime lead on a 32-yard touchdown pass from Riley Neal to Jared Pinkney in the first quarter and Vaughn’s 2-yard TD run in the second quarter.

Vaughn increased the Commodores’ lead to 21-0 with a 75-yard run, his longest of the season, down the left side on the first play of the second half.

Tight end Jared Pinkney made his first two TD receptions of the season. In addition to the first-quarter score, he had a 7-yard reception in the end zone that stretched the Commodores’ lead to 31-0 with 3:11 left in the third quarter.

Neal passed for 179 yards and two touchdowns for the Commodores.

Vanderbilt: The Commodores’ struggling offense finally showed some life after scoring only two TDs in the previous three games.

IT’S ALL ABOUT FINISHING

Vanderbilt’s defense only allowed nine yards in the second half.

“It’s really about understanding finishing,” Commodores linebacker Caleb Peart said. “I think when there’s only so many games left in the season, you really have to understand what you’re playing for. Obviously, there isn’t a bowl game, but we’re still playing for something bigger than ourselves and I think guys are very committed and did their job very well tonight.”

Vaughn hopes the win over ETSU will give Vanderbilt a little momentum entering its in-state rivalry with Tennessee on Saturday.

“It’s very important that as a team we’re coming off a big win,” Vaughn said. “I feel that this is something that we needed going into a rivalry game and we’re going to keep preparing.”

East Tennessee State: Three Buccaneers will compete in the FCS Bowl on Dec. 8.

Vanderbilt: The Commodores visit Tennessee in their finale Saturday with wins in three straight and five of the last seven in the series.