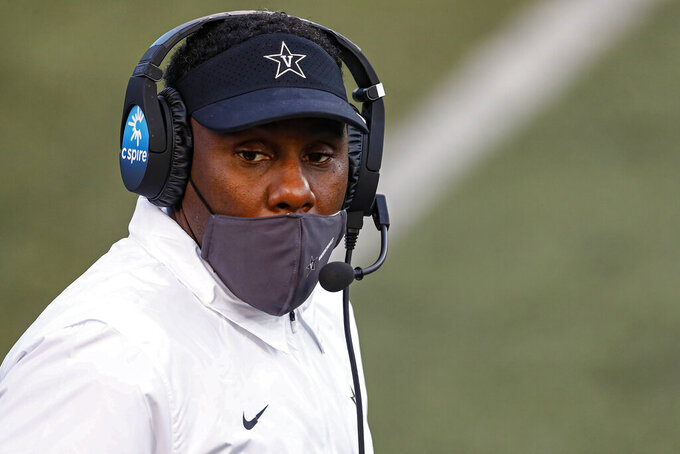 “She’s really good with a soccer ball, she seems to be pretty good with a football so we'll see,” Mason said. “We're keeping all options open right now, and we'll get a chance to see what she does on Saturday if given the opportunity.”

Mason said his Commodores (0-7) are having health issues with their specialists. Vanderbilt has declined to comment on any players who've either tested positive for COVID-19 or are in quarantine. Junior Pierson Cooke is 3-of-7 on field goals this season, and junior Wes Farley is the backup.

Mason said he reached out to soccer coach Darren Ambrose, a close friend, to see if Fuller could work as an option. He saw Fuller kick in practice Tuesday both off the tee and kicking a couple field goals.

“I just wanted to see how strong her leg was, and I can tell you she's got a strong leg,” Mason said. “We'll see what that yields. I mean in terms of distances, I'm not into talking about that. I got another like day to day to go in there and evaluate exactly where she sits. ... She seems to be a pretty good option."

No woman has appeared in an SEC football game or for any Power 5 team.

Katie Hnida was the first woman to score in the top Division I level Aug. 30, 2003, with two extra points against Texas State-San Marco after starting her career at Colorado. She missed an extra point in December 2002 agaisnt UCLA in the Las Vegas Bowl.

April Goss kicked an extra point in the first half of Kent State's 45-13 win over Delaware State on Sept. 15, 2015. That made her the second woman to score in a Football Bowl Subdivision game.