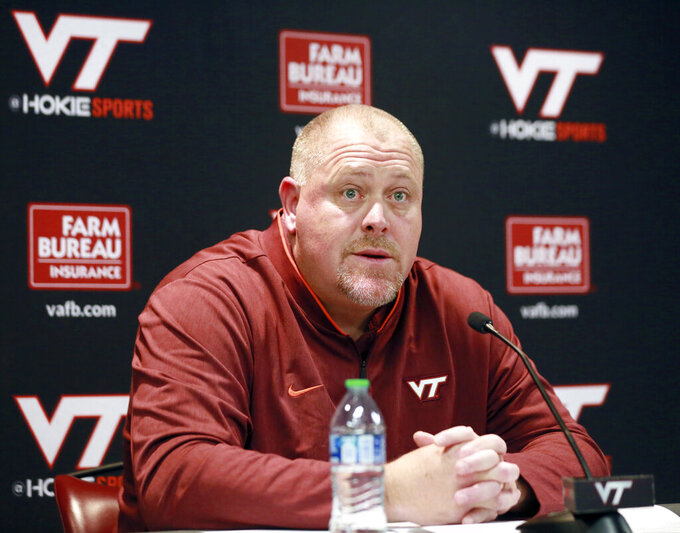 Then the opportunity came when athletic director Whit Babcock was told by Justin Fuente that he would move on rather remain at Virginia Tech with his future unclear. Bobcock then placed a call to Price.

“It’s bittersweet,” Price said during a 30-minute news conference Thursday. “On one hand you have such respect for coach Fuente and the job he was doing, then just overwhelmingly humbled by the Whit Babcock’s belief in me.”

Babcock tabbed Price to lead the team through the last two regular season games after Fuente decided not to finish the season.

The Hokies (5-5, 3-3 Atlantic Coast Conference) play at Miami (5-5, 3-3) on Saturday and close the regular season at Virginia the following week.

“I just want to do my best for these kids. These kids deserve to go out a winner," Price said. “The seniors deserve to win. There’s a lot to play for."

The Hokies still have an outside chance at winning the Coastal Division if they win their last two games and get some help from other teams.

“Our story is not written. The book’s not finished. What’s it going to say?” Price said. “We’re going to finish writing it the next two weeks."

Price, a senior captain when the Hokies beat Texas in the 1995 Sugar Bowl, told the team he won't be the head coach beyond this year, but said finishing strong is the priority. Price also reminded players how important the school and program are to him, taking them Thursday to the memorial on campus for the 32 people killed by a gunman on April 16, 2007.

Price, a co-defensive line coach before Tuesday, said he's not sure what his demeanor will be like on the sideline. As a position coach Price considered it a good thing to be excitable, but he hopes to be more like College Football Hall of Famer Frank Beamer now that he's in charge.

“I guess we’ll find out Saturday because I’ve never been a head coach on any level. I’m hoping and praying that, like coach Beamer, when I panic, that’s when the kids should worry,” Price said. “I’m going to do my best to keep my cool because I think that’s what a leader is supposed to do.”